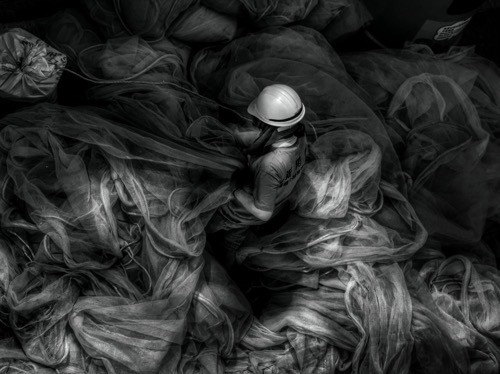 The talent of overseas Filipino workers was highlighted Sunday at a free photography exhibition in Taipei depicting the lives of migrant workers.

The "Turning Point: Taiwan" exhibition, being held Oct. 24-30 at Taipei's Songshan Cultural and Creative Park, is showing roughly 300 photos that chronicle the journeys of migrant workers, featuring images of their hometowns and their working environments.

One of the highlights of the exhibition includes some 30 works by Joan Pabona, a prize-winning Filipina photographer and former domestic helper.

Born in the Philippine province of La Union, Pabona went to Singapore in 2008 and then to Hong Kong in 2013 to work as a domestic helper.

While still holding her job in Hong Kong, she won second prize for a photo titled "Sacrifice" at the National Geographic Wheelock Properties Youth Photo Competition 2017.

The black-and-white image, which was shot while Pabona was cleaning windows, shows an aerial view of a worker in a hard hat among safety nets used for scaffolding.

"I felt a connection to the scene, because that worker was working so hard to give a greener pasture to his or her family," she told CNA.

However, it was one of her prior photos, titled "Solitude," shot in 2016 in Hong Kong, of a woman sitting alone in the dark next to a beam of light that gave her the inspiration to pursue photography, Pabona said.

"During that period, I asked myself what my purpose is in life, because as a domestic worker busy with work, I realized that I was so lonely," she said. "So through photography, I wanted to show the emotions and feelings of a migrant worker."

Finishing her contract with her Hong Kong employer in October, she is now a full-time photographer based in her home province, Pabona said.

She was invited to the exhibition to give a talk on her works and also give a workshop on photography.

Another highlight of the exhibition is Philippines-inspired clothing made by Taoyuan Filipino factory worker Mark Lester Reyes, who has become a household name among the Filipino community in Taiwan for his artistic talent and designs.

After a work-related accident in March 2014 that gave him chemical burns on his body and face, he started to use make-up to cover his scars, Reyes said.

Through his use of make-up, many people started to ask him for tips and advice on make-up for fashion shows and events, which led him to find his new-found talent, Reyes said.

"It was then that I started to ask my friends who were competing in (fashion) contests if I could also make their costumes, which they agreed to," Reyes said, adding that he graduated from a vocational course in visual arts in high school.

His creations, which are known for their use of recycled materials thrown out by factories, quickly became famous throughout the Filipino community, Reyes said.

His gowns were also showcased at celebrations for the 120th anniversary of Philippines independence in 2018 in New Taipei.

"I want to showcase and represent the Filipinos in Taiwan," he said.

The "Turning Point: Taiwan" exhibition was organized by the non-governmental organization One-Forty, which was established in 2015 to focus on vocational training for migrant workers in Taiwan to give them skills they need in their home countries after they finish working in Taiwan.

A total of 6,279 people have visited the exhibition since its opening, according to One-Forty.

There were a total of 714,291 migrant workers from Indonesia, Philippines, Thailand, and Vietnam in Taiwan as of the end of September, according to Ministry of Labor statistics.