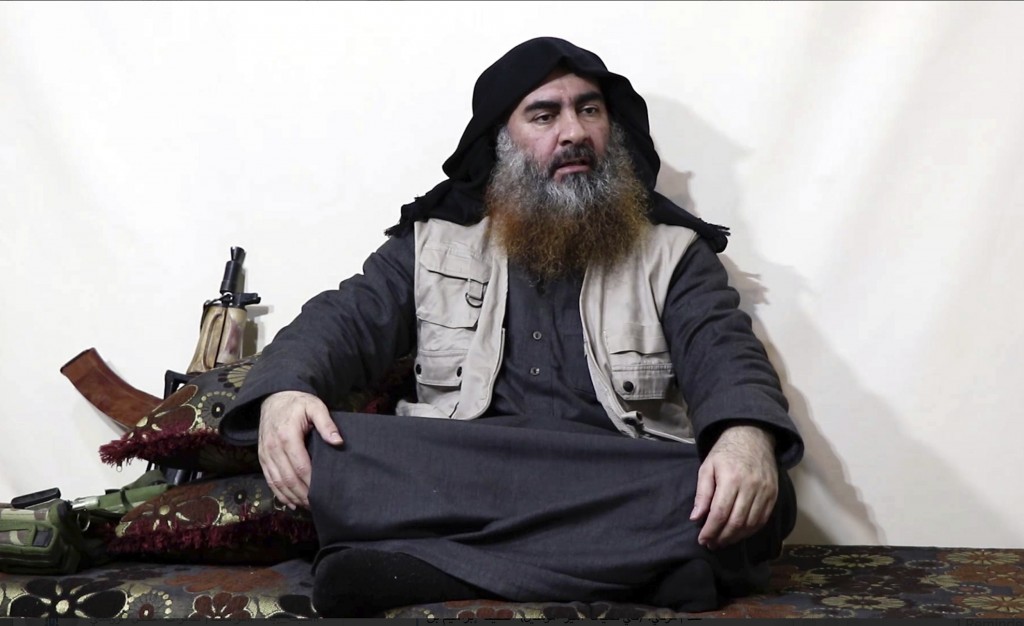 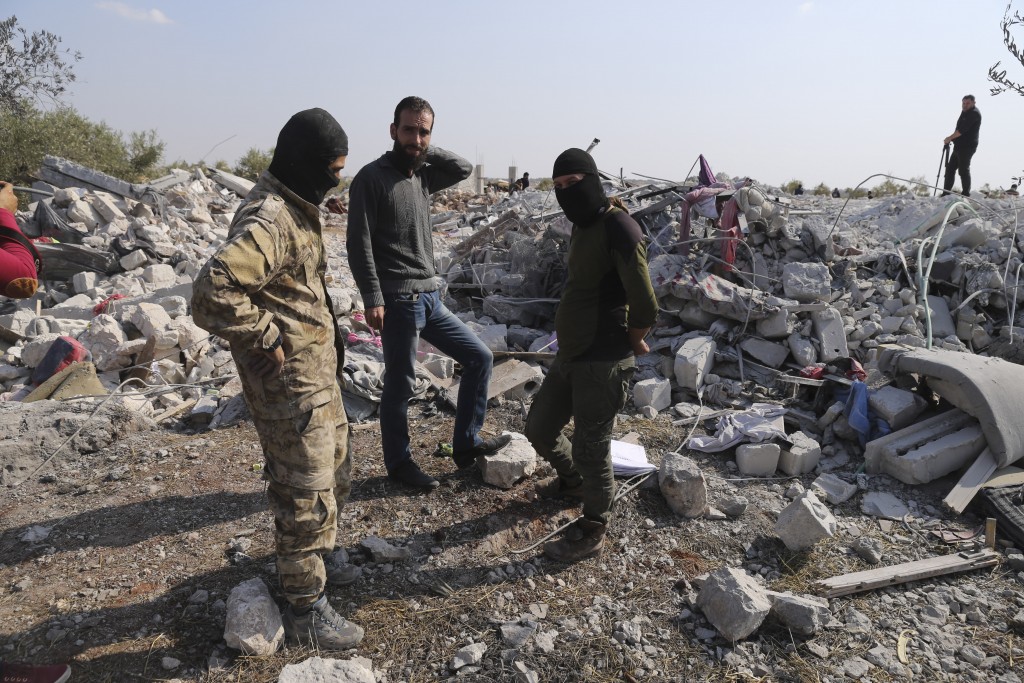 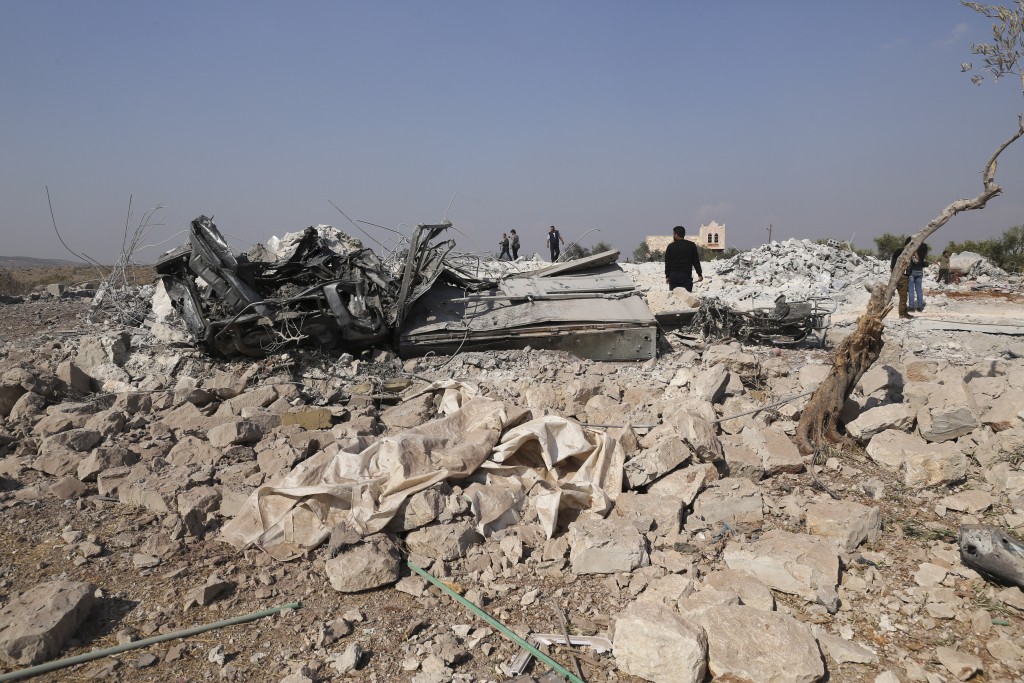 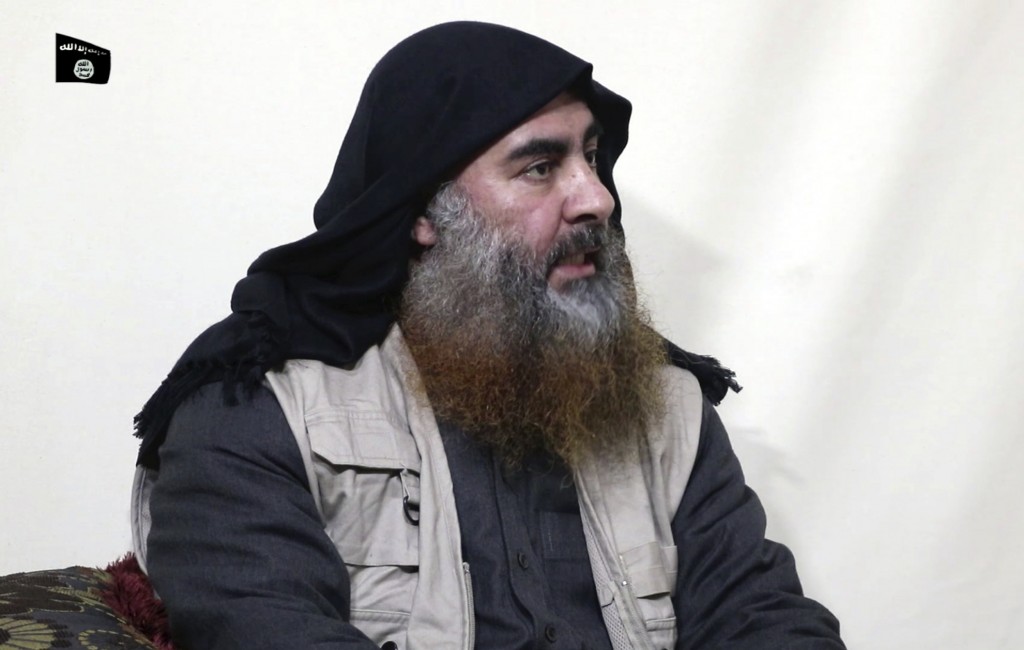 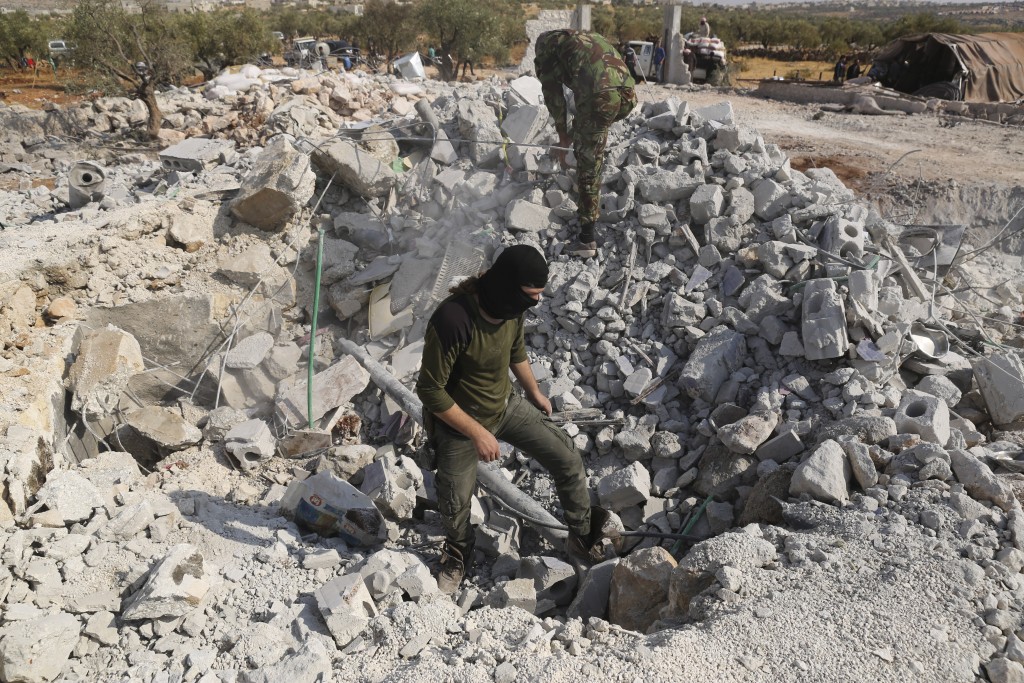 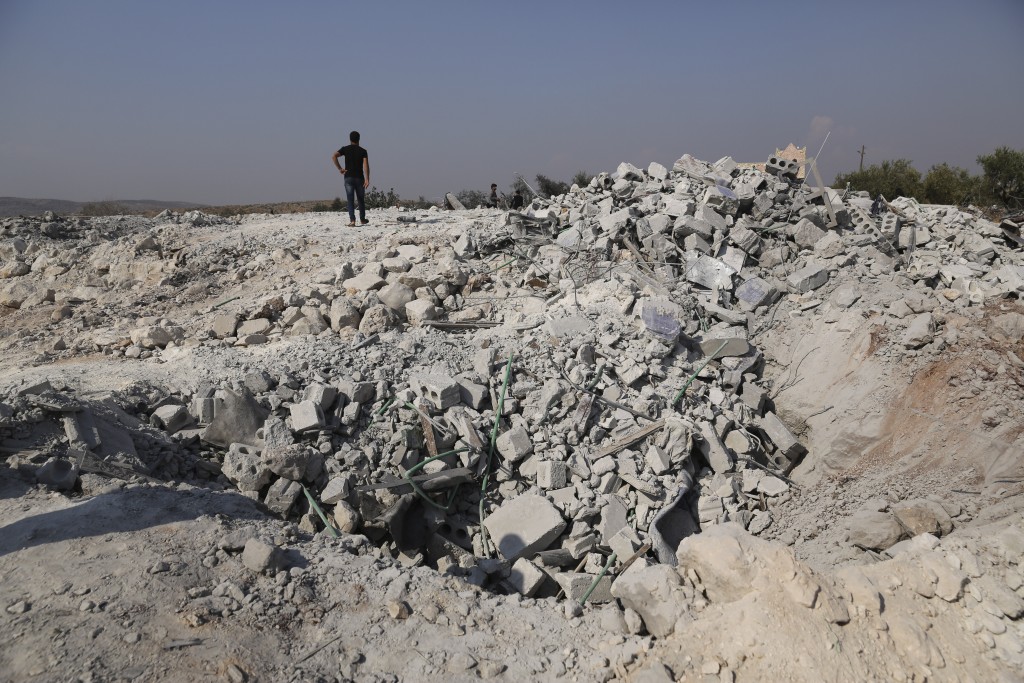 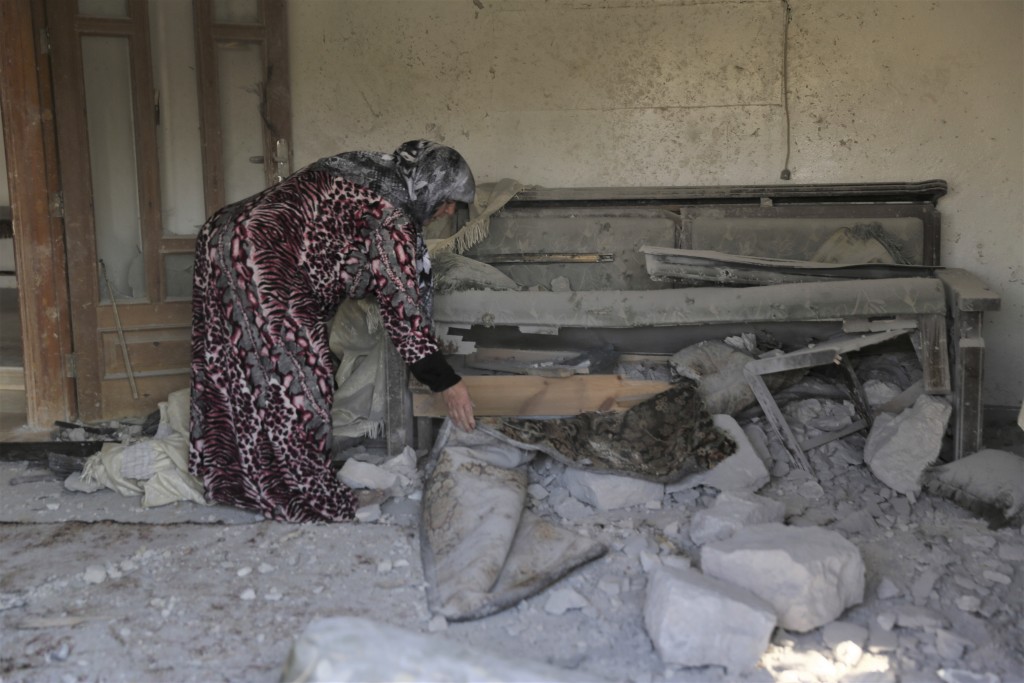 BEIRUT (AP) — Abu Bakr al-Baghdadi sought to establish a new Islamic "caliphate" across Syria and Iraq, but he might be remembered more as the ruthlessly calculating militant leader of the Islamic State group who brought terror to the heart of Europe and set up a short-lived organization so extreme that it was shunned even by al-Qaida.

With a $25 million U.S. bounty on his head, al-Baghdadi steered his chillingly violent but surprisingly disciplined followers into new territory by capitalizing on feelings of Sunni supremacy and disenfranchisement at a time of tumult that followed the Arab Spring.

One of the few senior IS commanders still at large after two years of steady battlefield losses, al-Baghdadi died Saturday when he detonated his suicide vest in a tunnel while being pursued by U.S. forces north of Idlib, Syria, killing himself and three of his children, U.S. President Donald Trump announced Sunday. He was believed to be 48.

"He didn't die a hero, he died a coward, crying whimpering and screaming," Trump said at the White House, adding that the U.S. had al-Baghdadi under surveillance for weeks.

Militants under his command were some of the first jihadis to grow up with the internet, and they deftly exploited social media to tout their military successes, document their mass slaughter, beheadings and stonings, and promote their cause to a global audience.

The Islamic State suffered steady battlefield losses that saw its territory shrink from an area the size of Britain to a speck in the Euphrates River valley. The announcement of his death came nearly two years after Iraq announced the defeat of IS and five years after the group humiliated its armed forces and seized nearly a third of the country.

In April, U.S.-backed Kurdish-led forces in Syria declared the group's territorial defeat after liberating the village of Baghouz in eastern Syria, its last bastion.

Though at minimum a symbolic victory for Western counterterrorism efforts, his death would have unknown practical impact on possible future attacks. He had been largely regarded as a symbolic figurehead of the global terror network, and was described as "irrelevant for a long time" by a coalition spokesman in 2017.

It is not clear who would replace al-Baghdadi — the group has lost many of its senior commanders in U.S.-led airstrikes, including Fadhil Ahmad al-Hayali, said by U.S. officials to be the group's No. 2 leader. Al-Hayali was killed in an August 2015 airstrike by the U.S. in Iraq. Another top figure was Abu Ali al-Anbari, the extremist group's leading finance official who was killed in 2016.

Abu Mohammed al-Adnani, the IS spokesman and one of the group's best known commanders, was also said to have been killed in 2016 by a Russian airstrike.

Al-Baghdadi was born as Ibrahim Awwad Ibrahim Ali al-Badri al-Samarrai sometime in 1971 in Samarra, Iraq, about 95 kilometers (60 miles) north of Baghdad, according to a U.N. sanctions list. His hometown later would be the site of a 2006 bombing by Sunni militants on a revered Shiite shrine — an attack that sparked a wave of sectarian violence that pushed Iraq to the brink of civil war.

Details of his early days are murky. Most rely on a brief biography posted to online jihadi forums in July 2014 that traced his lineage to the Prophet Muhammad's Quraysh tribe. Its claims, which cannot be independently confirmed, describe al-Baghdadi as coming from a religious family and earning a doctorate from Saddam University for Islamic Studies, the Iraqi capital's main center at the time for Sunni clerical scholarship. It says he promoted the Salafi jihadi movement in Samarra and the nearby Diyala province. Salafi jihadis advocate "holy war" to bring about a strict, uncompromising version of Islamic law, or Shariah.

According to IS-affiliated websites, al-Baghdadi was detained by U.S. forces in Iraq and sent to Bucca prison in February 2004 for his anti-U.S. militant activities, although he was considered a civilian detainee and his jailers were unaware of his jihadi role. He was released 10 months later, after which he joined the al-Qaida branch in Iraq of Abu Musab al-Zarqawi.

Al-Zarqawi was killed by U.S. forces in an airstrike north of Baghdad in 2006 and al-Baghdadi became a trusted aid of its two most senior figures, Abu Omar al-Baghdadi and Abu Ayyub al-Masri. Al-Baghdadi assumed control of the group, known at the time as the Islamic State of Iraq.

The group he inherited, al-Qaida's official franchise in Iraq, had already been weakened by years of U.S. and Iraqi raids and the mobilization of large numbers of Sunni fighters opposed to its extremist ideology. But al-Baghdadi was playing the long game.

Deploying suicide attackers, roadside explosives, car bombs and Kalashnikov-toting gunmen, he increased the tempo of assaults against Iraqi government forces and Shiite civilians as the American military drew down its forces ahead of their December 2011 withdrawal. Prison breaks, including a military-style assault on two Baghdad-area jails in July 2013 that freed more than 500 inmates, bolstered his group's ranks.

The chaos of the uprising against President Bashar Assad in Syria provided an opportunity to expand his influence. Al-Baghdadi dispatched comrades to create a like-minded Sunni extremist group known as the Nusra Front, which more moderate Sunni rebels initially welcomed.

Over time, more of his fighters and possibly al-Baghdadi himself relocated to Syria, pursuing their plans to restore a medieval Islamic state, or caliphate, spanning both Iraq and greater Syria, also known as the Levant. In April 2013, al-Baghdadi announced what amounted to a hostile takeover of the Nusra Front, saying he was merging it into a new group known as the Islamic State of Iraq and the Levant. The move caught both the Nusra Front and al-Qaida's central command off guard.

Al-Baghdadi, however, would not compromise, and al-Qaida eventually had enough. In February, it formally distanced itself from al-Baghdadi, saying it had no connection with his group and "is not responsible for its actions."

But al-Baghdadi's organization was well on its way to achieving the proto-state it coveted, taking control of key cities such as Raqqa, Syria, and Fallujah in Iraq.

Then came the offensive that would draw the U.S. back into Iraq. In June 2014, al-Baghdadi's militants and allied Sunni fighters seized Iraq's second-largest city of Mosul and other Sunni-dominated communities in the north and west of the country. Government troops in many areas put up little resistance, abandoning their posts and leaving behind valuable American-made materiel. Al-Baghdadi's fighters posted propaganda videos of its forces gunning down captured Shiite troops en masse.

By month's end, the group announced its own state governed by Islamic law. Al-Baghdadi became the declared "caliph" of the newly renamed Islamic State group, and Muslims worldwide were urged to pledge allegiance to him.

On June 29, 2014, the group released a video showing a man purporting to be al-Baghdadi giving a sermon at a Mosul mosque.

President Barack Obama launched airstrikes against IS beginning Aug. 8. He acted after thousands of Iraqi Yazidis, followers of an ancient religion with ties to Zoroastrianism, were targeted by al-Baghdadi's fighters and in order to safeguard U.S. interests, including a consulate in the Iraqi Kurdish regional capital of Irbil.

The U.S. and Arab allies eventually expanded the military campaign to target IS fighters with airstrikes in Syria too, helping U.S.-backed Kurdish fighters battle the group.

Under pressure in both countries, the group turned outward, claiming responsibility for the Nov. 13 attacks in Paris in which 130 people died, and the March 22 attacks in Brussels that left 32 people dead.

Iraqi officials said al-Baghdadi was wounded in an airstrike on Nov. 8, 2014, in the town of Qaim, near the Syrian border in Iraq's western Anbar province. Days later, an online audio message purportedly from al-Baghdadi urged his followers to "explode the volcanoes of jihad everywhere."

Little is known about al-Baghdadi's family. An ex-wife, Saja al-Dulaimi, and her daughter from al-Baghdadi, were detained in Lebanon in 2014. She was released a year later as part of a swap with al-Qaida in exchange for kidnapped Lebanese soldiers and police. In July 2018, IS said al-Baghdadi's son, Huthaifa al-Badri, was killed fighting government forces in central Syria.

On April 30, he appeared in a video for the first time in five years, acknowledging defeat in the group's last stronghold in Syria but vowing a "long battle" ahead. He appeared with a bushy gray and red beard, wearing a black robe with a beige vest and seated on the floor with what appears to be an AK-74 rifle propped up next to him.

The man said to be Abu Bakr al-Baghdadi in the video also claimed the Easter bombings in Sri Lanka that killed over 250 people were "part of the revenge" against the West.

"Our battle today is a war of attrition to harm the enemy, and they should know that jihad will continue until doomsday," al-Baghdadi said.