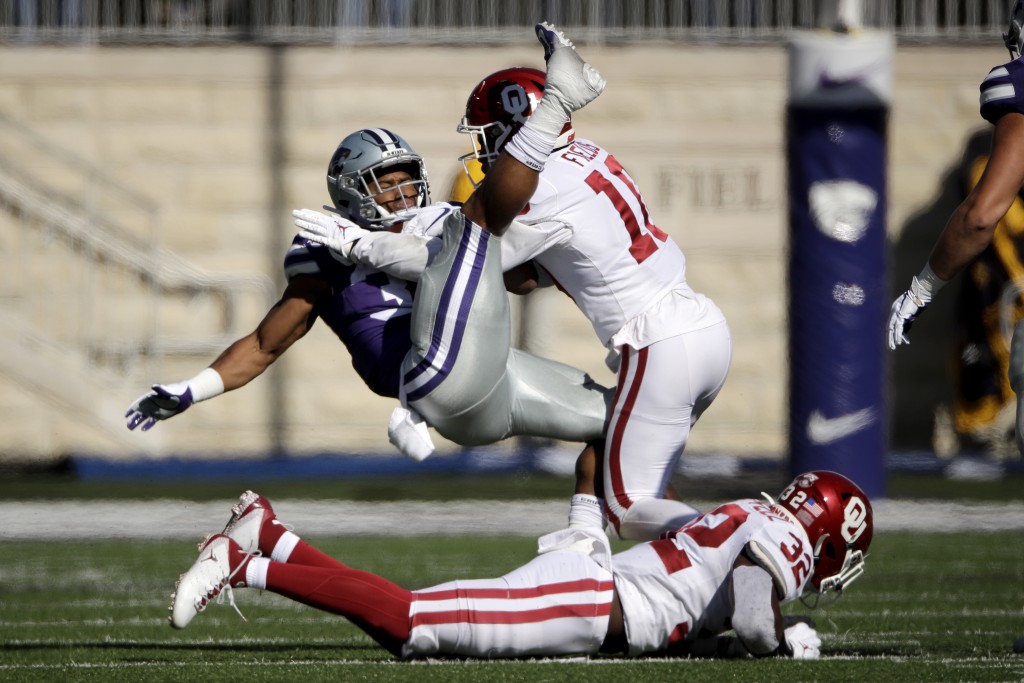 The Wildcats' quarterback threw for 213 yards while running for four touchdowns, the defense did just enough against Heisman Trophy contender Jalen Hurts and the Sooners' prolific offense, and Kansas State held on through a harrowing fourth quarter for a 48-41 victory Saturday.

It wasn't certain until Oklahoma (7-1, 4-1) tried on onside kick with 1:45 left. The ball caromed downfield and the Sooners recovered, but a review showed one of their players touched it one yard early.

The overturned call allowed new coach Chris Klieman to run out the clock on the Wildcats' first home win over the Sooners since 1996, and just their third win in Manhattan over a top-10 team.

It also was the third consecutive week a top-10 team lost to an unranked foe.

Their last true road defeat? At TCU, five years and 22 days ago.

Hurts threw for 395 yards and a touchdown while running for 95 yards and three more. But despite another big game by the nation's leader in total offense, the Sooners couldn't overcome a multitude of mistakes: two turnovers, costly penalties and the ejection of one of their defensive leaders.

Last week, it was the Sooner Schooner that crashed.

This week, it may have been Oklahoma's chances of reaching the College Football Playoff.

It didn't look that way early, though. The Sooners breezed downfield for a field goal, forced a quick punt, then scored again in a matter of minutes to take a 10-0 lead. And after Kansas State scored, Hurts answered with another touchdown to give the Sooners a 17-7 lead.

That's when the unraveling began.

In the first half alone, Oklahoma twice fumbled the ball or dropped a snap. Penalties on third-and-long on each of the Wildcats' first two scoring drives gave them first downs. The most egregious error came on a wide receiver pass in the final minute, when Nick Basquine's throw bounced off Charleston Rambo and into the hands of A.J. Parker to set up the Wildcats' third touchdown of the first half.

The quick-strike Sooners still had 23 seconds left after Thompson plunged into the end zone, and that was enough time to get another field goal. But they trailed 24-23 at the break.

That deficit swelled during the third quarter.

Kansas State marched for a field goal to open the second half. Then, after a pooch kick, Eric Gallon forced a fumble on the return — and sustained a severe knee injury requiring a cart to take him from the field — and the Wildcats recovered to set up another touchdown run.

When they forced a three-and-out and scored again, they had built a 41-23 lead.

Oklahoma rallied frantically in the fourth quarter, getting a 70-yard touchdown from CeeDee Lamb, rolling downfield for Hurts' third TD run and a 2-point conversion, and then getting a field goal from Gabe Brkic to make it a one-possession game with 1:45 to go.

Then came the onside kick, the review — and the celebration in Aggieville.

Oklahoma: The Sooners could still reach the playoffs by winning out and getting some help, but the task become much more challenging. And the road doesn't get any easier with games against No. 23 Iowa State and No. 14 Baylor.

Kansas State: The Wildcats have won back-to-back Big 12 games after dropping the first two, and gave Klieman a signature win as he tries to build on longtime coach Bill Snyder's foundation.

Oklahoma cornerback Parnell Motley was ejected early in the second quarter when he kicked Kansas State tight end Logan Long along the Sooners' sideline. It came after Youngblood's touchdown run trimmed the Wildcats' deficit to 17-14 and occurred right in front of an official.

Oklahoma gets a week off before facing Iowa State on Nov. 9.

Kansas State heads down I-70 to face Kansas next Saturday.