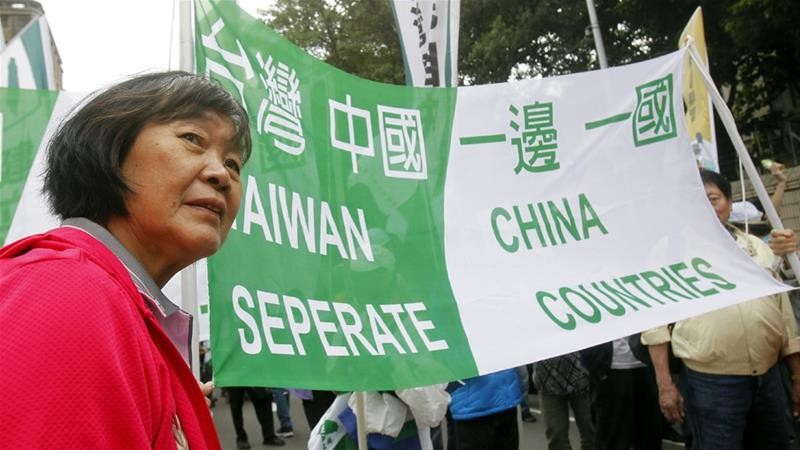 A recent survey released by the Mainland Affairs Council (MAC), which is in charge of supervising exchanges across the Taiwan Strait, showed that more than 27 percent of respondents in the poll supported Taiwan independence.

The MAC said the figure backing Taiwan independence in the latest survey hit a 10-year high since the council started to conduct the poll to collect opinions from the public on ties between Taiwan and China in April 2010.

The survey indicated that 1.4 percent of them said they hope Taiwan will unify with China "as soon as possible," and 8.9 percent said they wanted status quo in cross-strait ties for now but want unification with China in the end.

The survey also shows that 31.0 percent of the respondents said a good policy, for now, is to maintain the status quo and whether Taiwan will go independent or unify with China will depend on political reality.

About 25.8 percent of the respondents said they want to maintain the status quo forever, according to the poll.

The MAC also cited the survey as saying that 89.3 percent of the respondents agree with the government's policy, which indicates that the development of cross-strait relations should be decided by the Taiwan people.

The two figures were also the highest since the poll was conducted for the first time in 2010, the MAC said.

Since President Tsai Ing-wen (蔡英文) of the pro-independence Democratic Progressive Party (DPP) came to power in May 2016, ties across the Taiwan Strait have been deteriorating, as Tsai has declined to endorse the "1992 consensus" advocated by the opposition Kuomintang as a basis for relations with China, which agrees to the idea of "one China" and Taiwan being a part of that but with different definitions of what that "one China" is.

The DPP maintains that such a consensus has never existed, and the party has always opposed the idea that Taiwan is part of China.

In the wake of a move by China to poach Taiwan's allies, Taipei has lost seven diplomatic allies to Beijing since Tsai assumed office, leaving Taiwan with just 15 allies.

The survey found that 89.3 percent of the respondents oppose the "one country, two systems" proposed by Chinese President Xi Jinping (習近平) to govern ties across the strait, up from 75.4 percent in a similar poll conducted in January.

About 77.5 percent of the respondents said they support the government's efforts to bolster Taiwan's defense capability to safeguard Taiwan's sovereignty and democracy, while 62.1 percent said they support the democratic safety net proposed by Tsai in January, which is aimed at enhancing security and protecting democracy in cross-strait interactions, the poll found.

As for the current chaos in Hong Kong ignited by massive street demonstrations demanding democracy, 54.8 percent of the respondents said China's "one country, two systems" formula has failed to be realized in the territory.

In addition, 72.0 percent of the respondents urged the Hong Kong government to start a dialogue with its people as soon as possible to meet their demands.

The survey was conducted Oct. 17-21 by National Chengchi University, commissioned by the MAC, and collected 1,073 valid questionnaires from people aged 20 and over. It had a confidence level of 95 percent and a margin of error of plus or minus 2.99 percentage points.