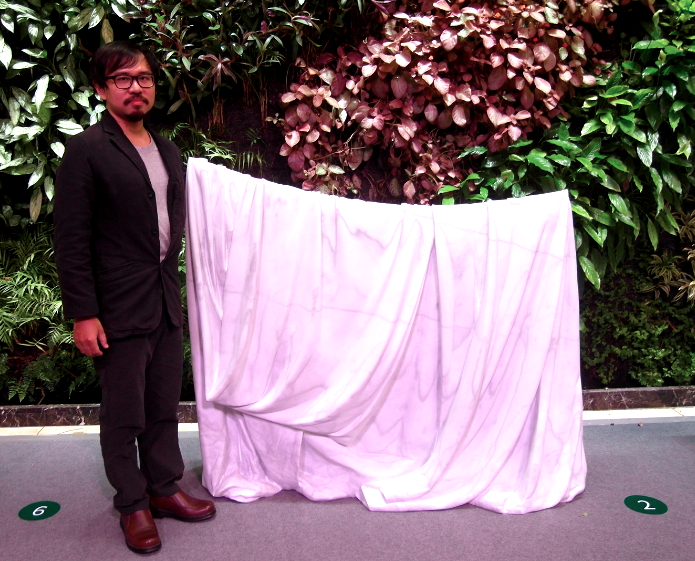 The 4th Lih Pao International Sculpture Biennale Awards had the theme of “Harmony” and was hosted by the Lih Pao Culture Arts Foundation (麗寶文化藝術基金會). Five works were selected from 200 contributions, from 28 countries, to enter the finals stage.

The foundation announced the winning list on Thursday (Oct. 24), at the National Concert Hall. The team of international judges included Takamichi Ito (伊藤隆道), Izumi Hatano (波多野泉), Mitsuyuki Takeda (竹田光幸), and others. Additionally, the foundation collaborated with the British Council and the Japan Foundation. Taiwanese sculptor Da Shi-wei’s winning work was titled “Time/Space” (時間/空間). The marble sculpture weighs 200kg and is elaborately carved into what looks like a sheet of hanging fabric.

According to Da, “The inspiration of the work originated from the invisible passing of time and aims to visualize time with stone. It is a way to attain harmony between reality and fantasy.” Da added, “Also, I hope the work can remind people to live in and cherish the moment. Otherwise, time fades away before you notice.”

The second place winner was Lin Chi-hang (林志航) with a work named “Crashing 17” (壓扁ing17), a smashed can made of wood. “I want people to start appreciating the importance of preserving the environment,” said Lin.

The other three winners were Taiwan’s Chang Da-zhou (張達州) who used granite to create a series of works that encouraged people to touch them. China’s Liu Lei (劉磊) and his carved Egyptian figures were conversation starters, while Guillaume La Brie from Canada presented his work, “George Washington Who Wasn’t There”.

The theme for the fifth edition of the Lih Pao International Sculpture Biennale Awards is “infinity” (無限), according to Wu Bao-Tien (吳寶田), director of the Lih Pao Culture Arts Foundation. Enrollments begin April 2020. Visit the website for further information.