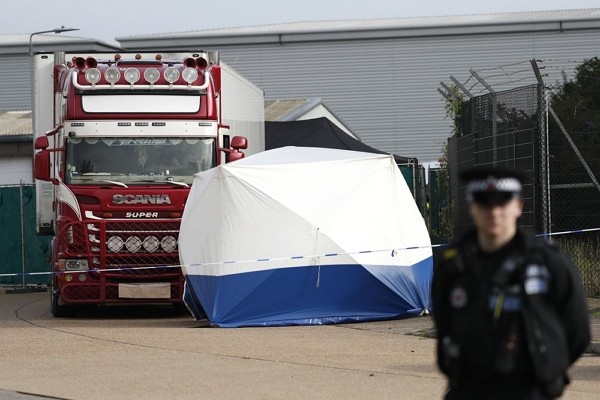 TAIPEI (Taiwan News) — The British police confirmed Thursday (Oct. 24) that all 39 people found dead in a refrigerated truck near London were Chinese nationals.

The 25-year-old truck driver Maurice Robinson was detained on suspicion of murdering the 31 men and 8 women. The cause of their death is still unclear, and Robinson claimed that he did not know there were people in the truck's container, which was refrigerated, with temperatures inside as low as -25 degrees Celsius.

According to the police, Robinson was the first person to notify them about the incident. A witness said Robinson had seemed shocked about the discovery and almost passed out, reported Yahoo News.

The container, which arrived in England early on Wednesday, is believed to have come from the Belgian city of Zeebrugge. "At this point, we don't know whether these people entered the container at Zeebrugge or whether it arrived with them already on board," said Belgian prosecutors, according to CNN.

The case was initially investigated as a mass murder, but evidence now suggests it is a human trafficking case. The incident serves as a painful reminder of the 58 Chinese illegal immigrants who were found dead in a shipping container in the port city of Dover in 2000.