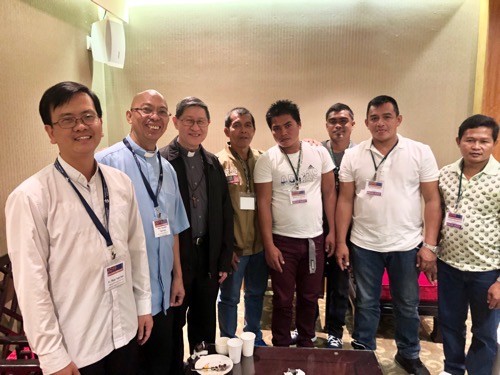 The Ministry of Labor (MOL) will grant fishermen involved in a bridge collapse in Yilan earlier this month who are looking to move to factory jobs an extended period in which to find work, according to a labor official Thursday.

Six fishermen -- three Indonesians and three Filipinos -- were killed when the port bridge came crashing down onto the boats below at around 9:30 a.m. on Oct.1. The incident also left 18 migrant fishermen, 14 Filipino and 4 Indonesian homeless.

Paul Su (蘇裕國), deputy director of the Cross-Border Workforce Management Division under the labor ministry's Workforce Development Agency, told CNA that the paper work for five of the Filipino fishermen who want to transfer to factory jobs will be issued next week.

"Once they have their paperwork, they can register for factory jobs. If they do not find jobs within 60 days, we will allow them to extend the period for another 60 days," Su said. "We will allow the extension because this is a special case."

Renato Ablog, originally from the Philippine province of La Union and one of the five fishermen, said that the trauma from the bridge collapse was one of the main reasons he wanted to transfer to a factory job.

"I don't have a preference what type of factory job I get, but the main thing is to earn a salary because I have family in the Philippines that I need to support," Ablog told CNA.

Ablog, along with four of his former colleagues, identified as Jason Villaruel from Masbate, Romeo Culanag from Cebu, Alvin Medriano from La Union, and Nelson Cristobal from Bulacan, have been taken in by Father Joy Tajonera, who is head of the Ugnayan Center shelter, in Taichung.

Meanwhile, of the other 13 Filipino migrant fishermen, two are returning to the Philippines to live, while seven are transferring to new fishing employers in Yilan, Su said.

One Indonesian is in hospital with a severe injury, one is in hospital recovering from hand surgery and will transfer to other employers upon recovery, while two have found new employers but will visit Indonesia before returning to Taiwan to continue working, Su said.

As of the end of April, there were 12,406 migrant fishermen in Taiwan, Su said, adding that 12,383 work on fishing boats, while 23 are employed at fish farms.

The 11th ICMA World Congress is the first global gathering since the last world congress in 2011, in Hamburg, Germany.

ICMA is a free association of 29 charitable organizations that represent various Christian churches and communities operating in more than 100 countries for the welfare of seafarers, fishers and their families, according to the association's website.