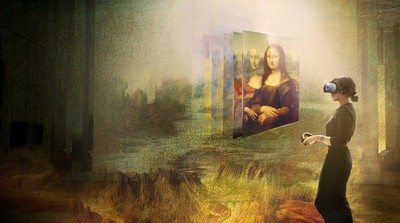 Taiwan-based smartphone brand HTC Corp., which stepped up its efforts in virtual reality technology development by launching its first VR headset - the Vive - and follow-up models, has teamed up with the Louvre Museum in Paris to offer visitors a VR experience of Leonardo da Vinci's best known painting, the Mona Lisa.

In a statement, HTC said partnering with HTC Vive Arts, the Louvre has created a VR work: "Mona Lisa: Beyond the Glass," which will premiere on Thursday and run through Feb. 24, 2020, bringing to life the story of da Vinci's iconic masterpiece.

It will be the first VR experience presented by the Louvre and will be part of the museum's seminal retrospective which commemorates the 500th anniversary of Leonardo da Vinci's death, HTC said.

According to HTC, Mona Lisa is visited by more than 20,000 people a day, but is kept in a glass case for protection.

The VR work will offer visitors an unprecedented experience. It will incorporate new scientific research that shows details invisible to the naked eye, providing insight into the techniques da Vinci employed.

HTC Vive Arts is a multi-million dollar global VR program launched by HTC that aims to change the way the world creates art and engages with the arts, offering content that supports creators and institutions who want to take advantage of VR technology to bring people closer to art.

"Mona Lisa: Beyond the Glass," HTC said, will give visitors who wear the Vive Cosmos an immersive VR experience about seven minutes in duration that enables them to inspect every detail of the painting through a wide range of different settings.

"The experience removes the crowds that typically surround the Mona Lisa, allowing viewers to come face-to-face with da Vinci's masterpiece before soaring across the painting's mountainous landscape. Bringing da Vinci's vision to life for a new generation, 'Mona Lisa: Beyond the Glass' evokes the spirit of innovation at the heart of his practice," HTC said.

In addition to the curatorial team at the Louvre, HTC said it has also worked with Emmissive, which is a VR content workshop in France to present "Mona Lisa: Beyond the Glass."

The Vive Cosmos, which was unveiled in early January in Los Vegas ahead of the opening of the Consumer Electronics Show (CES), runs a new platform called "Vive Reality System" and uses hand controllers, but requires no external sensors placed around the room.

Partly as a result of its efforts to develop VR headsets in a bid to offset the impact of stiff competition in the smartphone market, HTC reported its first year-on-year increase in sales for September in more than two years.

However, strong competition in the global smartphone market still squeezed HTC's sales for the first nine months of this year, with revenue falling 58.17 percent from a year earlier to NT$8.2 billion.