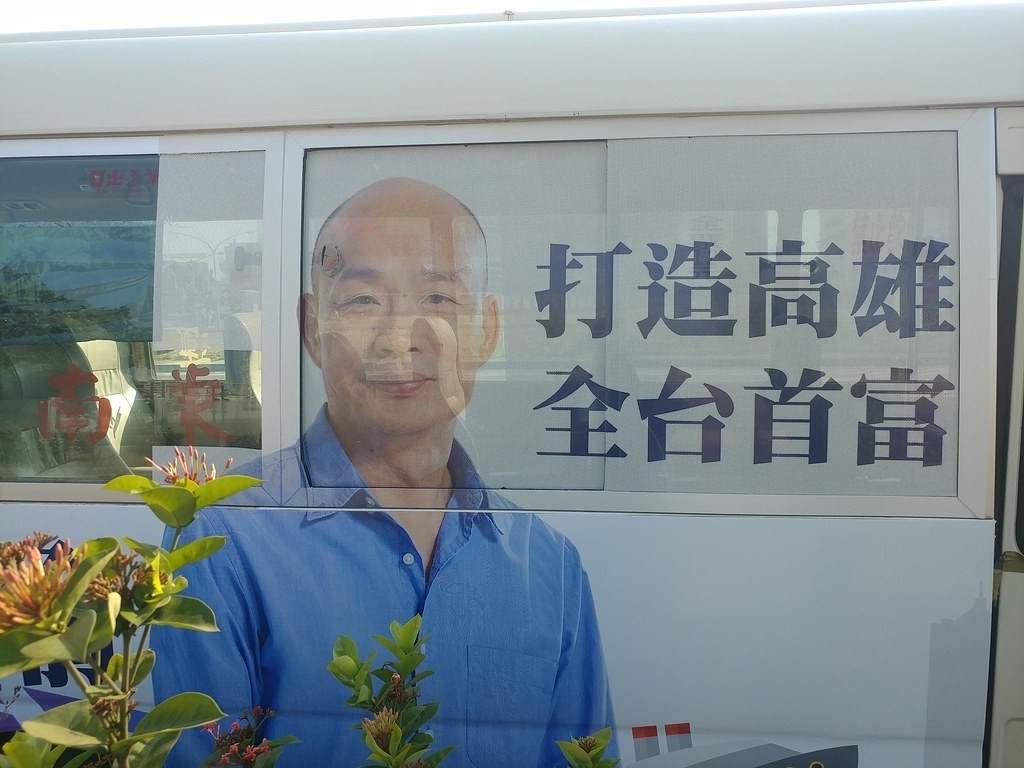 He has awarded himself three months’ holiday from his full-time job as mayor of Kaohsiung City despite having taken up the role only ten months ago. Most Taiwanese workers at the same stage of a new job have to make do with just three days of leave.

Maybe he just misread the small print on his contract. I know the characters for day (天) and month (月) don’t look very similar, but remember, Han signs off on up to ten documents a day, and when you’re tired after such a long day’s work and peering through the Kaohsiung smog, any two characters could be confused with each other, right?

Or, it could just be that he takes the Taiwanese electorate for fools! After all, this is the same Han Kuo-yu who is advocating scrapping labor reforms to allow company bosses in Taiwan to demand more overtime from their workers.

Perhaps "You work harder while I’m on holiday" will be the slogan emblazoned on the side of his battle bus during the upcoming presidential campaign?

But of course, it won’t be, because that would be a moment of honesty and clarity from a politician who has managed to revive his flatlining political career through a mixture of lies, false promises, and bombastic rhetoric. He managed to dupe the people of Kaohsiung with it last year, so why would he not revert to type now that he has given up pretending to be mayor and is officially campaigning full time?

Let’s have a quick recap of some of Han’s more rational campaign pledges during last year's mayoral campaign to see how he has performed in his current position. We will leave aside things like building a Disneyland, drilling for oil off the Taiping Islands, constructing an F1 circuit, and turning Qijin Island into Taiwan’s Las Vegas — after all, these sorts of things take time to deliver.

Has he managed to make everyone in Kaohsiung richer? No, not yet.

Is the population of Kaohsiung well on its way to the 5 million he promised? Er, no, still stable at around 2.77 million, where it has been for the past twenty years or so.

Has he created a start-up fund to help young people open their own businesses? Nope.

He must have at least managed to fix some of the pot holes in Kaohsiung’s streets? There are no statistics on this yet, but anecdotal evidence and the state of my spine after just about every scooter journey in the city says he has not.

So, what he has managed to achieve in his first ten months in office, you might ask? Good question!

The KMT presidential nomination and the anger and contempt of the majority of Kaohsiung residents are about all that can be offered to answer that question. Indeed, as soon as his first year in office comes to an end, he may well make history as the first Taiwanese mayor ever to be removed from office through a recall ballot.

Not that Han seems concerned about such a prospect. He expects to be president by then (although that might make him drop his plans to move the Presidential Office to Kaohsiung).

Han on the campaign trail

So, if Han’s time as Kaohsiung's mayor can be generously described as a failure, how are things going for him on the campaign trail? After all, this is what he is good at these days, isn’t it?

The truth is, since he officially became a full-time presidential candidate, not that well. He’s had eggs thrown at him at a campaign event in Tainan, where missing person posters with his face were put up.

Then, a planned beach cleanup of his was foiled after a department of his own city council got there a day earlier than him. All of these incidents could be called unfortunate, but all have brought tremendous amusement to the electorate and, on a more serious note, hint at chronic disorganization within his campaign.

Some Han fans feeling badly let down by his time as mayor might have hoped that he would run a more serious campaign now that he is going for the highest office in the land. No more unachievable, uncosted policies and untrue statements might have helped cultivate the illusion that Han was a serious candidate.

But that’s not Han's style. Instead, he has been caught wildly exaggerating the size of crowds attending his campaign rallies.

A little tip, Han: if you are going to do this, make it a credible exaggeration rather than adding a naught to the end of the number and hoping no one will notice.

Maybe he’s still tired? There must be some excuse for such a ludicrous falsehood. And he’s certainly not being troubled by the Kaohsiung smog anymore given that he is never there.

Even more worrying than pretending more people support him than actually do, his pie-in-the-sky policy promises look to be back as well. "I will bring 20 million Chinese tourists to Taiwan," he confidently announced at a press conference on Sunday.

How will he achieve this and what infrastructure investments will he be making to cope with such a dramatic upsurge in numbers? Han isn’t going to bore us with such trivial details.

It’s an interesting choice of subject for his first significant policy promise because it is likely to alienate far more voters than it attracts.

Yes, there are a small number of businesses which have struggled since Communist China decided (unilaterally) to ban many tourists from Taiwan. But the majority of these are owned (and largely staffed) by Chinese people who are unlikely to be able to vote in a Taiwanese election, not least because many have already gone back to China.

The truth is that most Taiwanese citizens loathe Chinese tourists and think the country is better off without them. Chinese tour groups have a pretty justifiable reputation for being rude, obnoxious, badly-behaved, and disrespectful to both Taiwan’s culture and its people.

With the tourism sector in Taiwan continuing to grow despite a drop in numbers from Communist China, most are happy to see the decline of Taiwan’s dependence on its biggest diplomatic enemy for tourism and have recoiled in horror at Han’s promise, no matter how far-fetched it may be.

The most important aspect of this ridiculous policy pronouncement is that it is a sign that the Han Kuo-yu of old is back — spinning lines, fabricating falsehoods, and pushing out policies he cannot hope to deliver on.

His decision to scrap a proposed trip to the US for fear that they might question his agenda in more detail than he could handle not only shows the limitations of the man but also indicates his determination to avoid scrutiny at all costs.

The people of Taiwan can expect a lot more of this in the coming months. We just have to hope that the country as a whole can see through it far better than the citizens of Kaohsiung did last year.

Here in Kaohsiung, we are already paying the price for the lies and deceit of Han Kuo-yu, the political candidate. The country of Taiwan must not make the same terrible mistake.