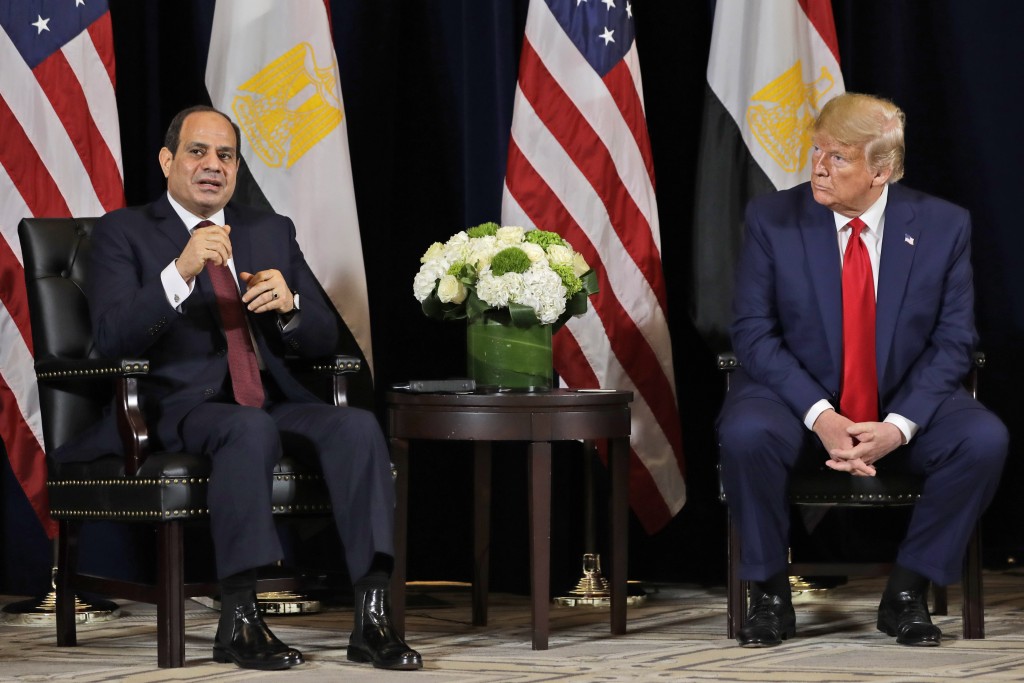 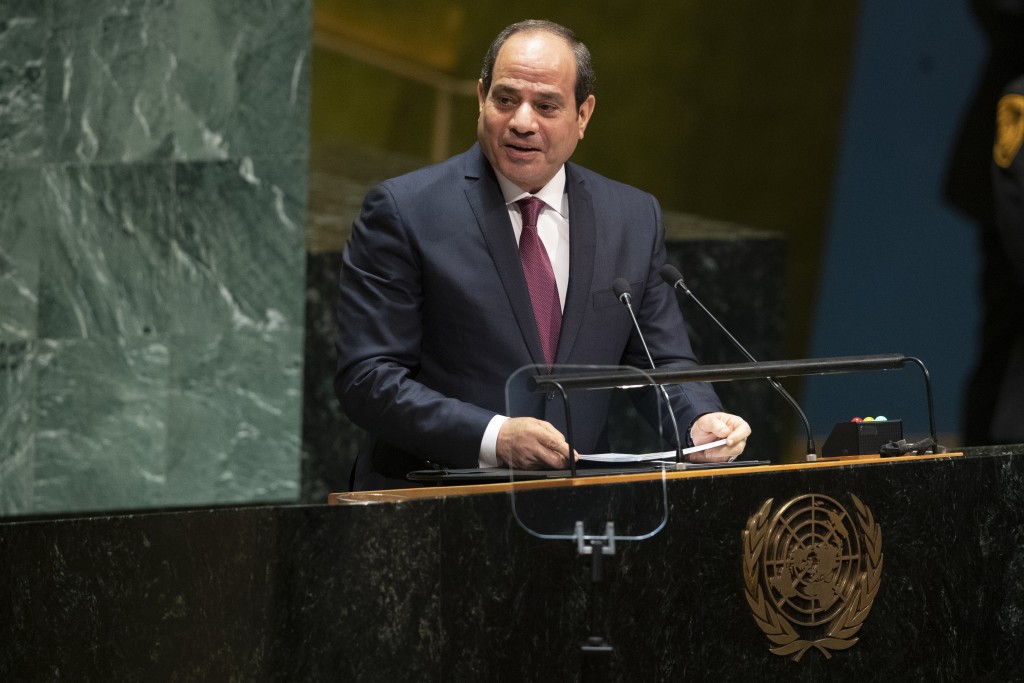 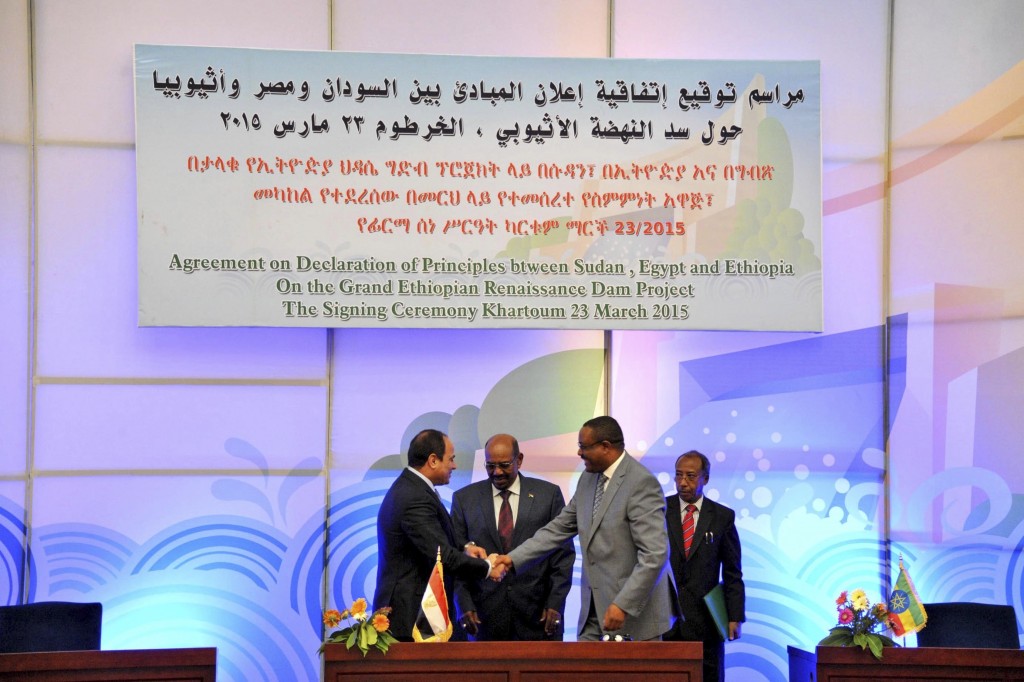 CAIRO (AP) — The latest breakdown in talks with Ethiopia over its construction of a massive upstream Nile dam has left Egypt with dwindling options as it seeks to protect the main source of freshwater for its large and growing population.

Talks collapsed earlier this month over the construction of the $5 billion Grand Ethiopian Renaissance Dam, which is 60% complete and promises to provide much-needed electricity to Ethiopia's 100 million people.

But Egypt, with a population of around the same size, fears that the process of filling the reservoir behind the dam could slice into its share of the river, with catastrophic consequences. Pro-government media have cast it as a national security threat that could warrant military action.

Speaking at the U.N. last month, Egyptian President Abdel-Fattah el-Sissi said he would "never" allow Ethiopia to impose a "de facto situation" by filling the dam without an agreement.

"While we acknowledge Ethiopia's right to development, the water of the Nile is a question of life, a matter of existence to Egypt," he said.

Egypt has been holding talks for years with Ethiopia and Sudan, upstream countries that have long complained about Cairo's overwhelming share of the river, which is enshrined in treaties dating back to the British colonial era. Those talks came to an acrimonious halt earlier this month, the third time they have broken down since 2014.

"We are fed up with Ethiopian procrastination. We will not spend our lifetime in useless talks," an Egyptian official told The Associated Press. "All options are on the table, but we prefer dialogue and political means."

Egypt has reached out to the United States, Russia, China and Europe, apparently hoping to reach a better deal through international mediation. The White House said earlier this month it supports talks to reach a sustainable agreement while "respecting each other's Nile water equities."

That has angered Ethiopia, which wants to resolve the dispute through the tripartite talks.

An Ethiopian official said the packages offered by Cairo so far "were deliberately prepared to be unacceptable for Ethiopia."

"Now they are saying Ethiopia has rejected the offer, and calling for a third-party intervention," the official added. Both the Ethiopian and the Egyptian official spoke on condition of anonymity because they were not authorized to discuss the talks with the media.

The main dispute is centered on the filling of the dam's 74-billion-cubic-meter reservoir. Ethiopia wants to fill it as soon as possible so it can generate over 6,400 Megawatts, a massive boost to the current production of 4,000 Megawatts. Ethiopia said earlier this year that the dam would start generating power by the end of 2020 and would operate at full capacity by 2022.

That has the potential to sharply reduce the flow of the Blue Nile, the main tributary to the river, which is fed by annual monsoon rains in the Ethiopian highlands. If the filling takes place during one of the region's periodic droughts, its downstream impact could be even more severe.

Egypt has proposed no less than seven years for filling the reservoir, and for Ethiopia to adjust the pace according to rainfall, said an Egyptian Irrigation Ministry official who is a member of its negotiation team. The official also was not authorized to discuss the talks publicly and so spoke on condition of anonymity.

Egypt wants to guarantee a minimum annual release of 40 billion cubic meters of water from the Blue Nile. The irrigation official said anything less could affect Egypt's own massive Aswan High Dam, with dire economic consequences.

"It could put millions of farmers out of work. We might lose more than one million jobs and $1.8 billion annually, as well as $300 million worth of electricity," he said.

El-Sissi is set to meet with Ethiopia's Prime Minister Abiy Ahmed, winner of this year's Nobel Peace Prize, on Wednesday in the Russian city of Sochi, on the sidelines of a Russia-Africa summit. They may be able to revive talks, but the stakes get higher as the dam nears completion.

The International Crisis Group, a Brussels-based think tank, warned earlier this year that the "risk of future clashes could be severe if the parties do not also reach agreement on a longer-term basin-wide river management framework."

In recent weeks there have been calls by some commentators in Egypt's pro-government media to resort to force.

Abdallah el-Senawy, a prominent columnist for the daily newspaper el-Shorouk, said the only alternatives were internationalizing the dispute or taking military action.

"Egypt is not a small county," he wrote in a Sunday column. "If all diplomatic and legal options fail, a military intervention might be obligatory."

Anwar el-Hawary, the former editor of the Al-Masry Al-Youm newspaper, compared the dispute to the 1973 war with Israel, in which Egypt launched a surprise attack into the Sinai Peninsula.

"If we fought to liberate Sinai, it is logical to fight to liberate the water," he wrote on Facebook. "The danger is the same in the two cases. War is the last response."