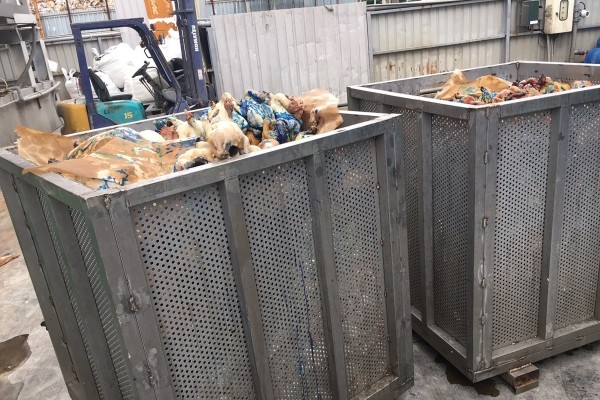 A total of 1,453 frozen chickens from a slaughterhouse in Taoyuan have been destroyed after they were confirmed to be infected with the highly pathogenic H5 avian influenza virus, the city's Animal Protection Office said Monday.

The case of abnormal chicken deaths was reported at the site in Bade District last Friday.

After receiving the report, officials arrived at the scene to collect tissue samples from the animals, and they ordered the carcasses to be frozen until tests were completed, the office said in a statement.

According to the Taoyuan office, the chickens originated from a poultry farm in Chiayi County.

Wang Te-chi (王得吉), head of the office, said the results of the analysis returned by the Council of Agriculture (COA) showed that the chickens were confirmed to have the highly pathogenic subtype H5N2 avian flu virus.

The frozen chickens were ordered to be destroyed Monday, while the slaughterhouse and areas in a 3-kilometer radius around it were disinfected on the same day inspectors arrived there, Wang said.

According to Bureau of Animal and Plant Health Inspection and Quarantine (BAPHIQ) statistics, this was the first time this year the Taoyuan slaughterhouse had been hit by avian flu.

Slaughterhouses across Taiwan, including in Taipei, Changhua County, Kaohsiung, Pingtung County and Taoyuan have so far been hit 16 times by avian flu this year, leading to the culling of 8,818 birds.