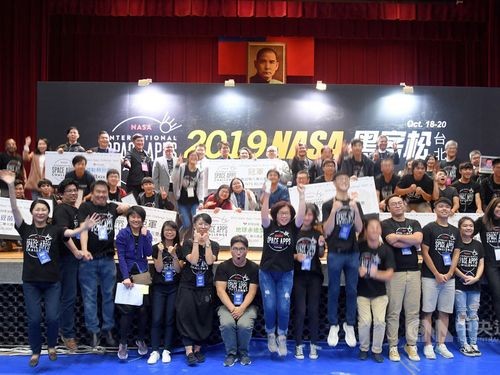 Two of the 67 Taiwanese teams that took part in NASA's International Space Apps Challenge this past weekend have been selected for the global round of the hackathon, with one of the teams focusing on fighting wildfires.

The two teams, ET760 and SEAL, will go forward to the global competition, which will conclude in January 2020 with NASA's selection of six winning teams that will be invited to visit its Kennedy Space Center in Florida, the organizers said.

The hackathon invites participants around the world to come up with innovative solutions to the challenges facing people, both on Earth and in space, or to create educational games that would allow people to explore and learn from NASA's abundant data.

Some of the solutions being sought are how to provide cheap, accessible Internet to people at sea, how to reduce the effects of lunar dust on astronauts, and finding new ways for machines to work on planets where electronics function poorly.

The project put forward this year by ET760 is titled Honeycomb Platform and its goal is to engage and enable citizens to help fight wildfires, said one of the members Su Shang-yen (蘇上硯).

The concept is to invite citizens who have drones with firefighting capabilities to register on the Honeycomb Platform, which will alert them if a wildfire breaks out in their vicinity, Su told CNA.

With such a response, the drones can get to the scene before firefighters, he said.

SEAL, meanwhile, designed a video game that allows players to customize the characteristics of a star to create planets that could reasonably exist in that stellar system.

Based on planetary and atmospheric chemistry, the game places practical restrictions on what can be created, while providing users with a fun yet educational experience.

Speaking at the hackathon in Taipei on Sunday, Deputy Minister of Science and Technology Hsu Yu-chin (許有進) said he hoped it would inspire more young people to enter the field of space technology.

"Taiwan has been developing space technology for more than 20 years," Hsu said. "FormoSat-5 was Taiwan's first indigenous high-resolution optical telemetry satellite, and the FormoSat-7 was launched into orbit in June. The participation of young talent and their innovative ideas are needed to continue advancing space technology."

The hackathon in Taiwan this year was hosted by the American Institute in Taiwan, in partnership with the National Space Organization, Chunghwa Telecom, the Taipei City government, National Taiwan Normal University, and the American Innovation Center.

The eighth edition of the three-day marathon-style programming contest kicked off last Friday in 229 cities worldwide.

In Taiwan, the 295 participants, competing in 67 teams at National Taiwan Normal University, were the largest number in Taiwan ever, the organizers said.