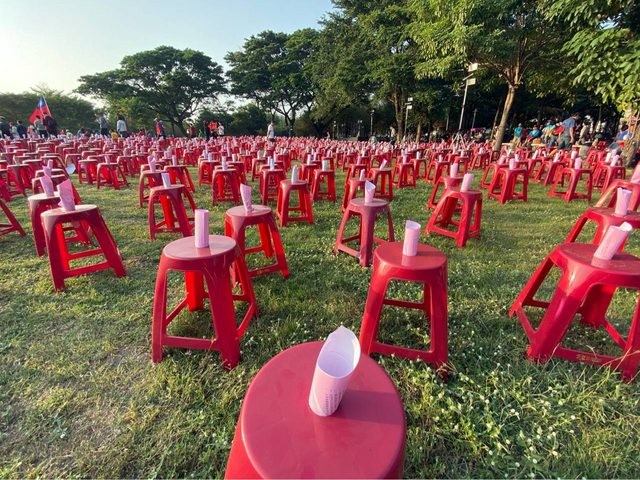 TAIPEI (Taiwan News) — Although the Kuomintang (KMT) party claims that 100,000 Han fans attended a campaign rally for presidential candidate Han Kuo-yu (韓國瑜) on Saturday (Oct. 19), based on photos of empty seats and barren fields, netizens estimated that the real number could have been closer to 10,000.

On Saturday, Han was joined on stage by former Taiwanese President Ma Ying-jeou (馬英九) and KMT Chairman Wu Den-yih (吳敦義) at a campaign rally held in Tainan. Organizers said that by 7 p.m., the event was packed with 100,000 screaming Han fans.

However, based on photos of the crowds and size of the venue, a Taiwanese netizen on the popular online message board PTT estimated that the real number of attendees was far lower. Many wrote sarcastic comments such as "Leader Han has secured [the presidency]" and "My great Han presidency has been secured!" Well-known PTT user 4XCat (四叉貓) wrote that at 4:57 p.m., he happened to be traveling through the area as the rally was building up. He said that there was a bit of a line at Yongkang Railway Station, but when he got to Shueipingwun Park in the heart of Tainan, where the rally was taking place, he saw many empty plastic chairs.

He wrote that he had originally wanted to count the number of empty chairs but that there were too many to account for. Instead, he said he decided to estimate the crowd based on people per square meter.

The PTT member said that the venue covered 8,000 square meters excluding the area covered by the stage and flower garden. He said that the chairs were fairly spread out and estimated that the total number people was around 10,000. Many netizens mocked how the chairs seemed to be distributed in a way to make the crowd seem larger than it really was:

"The chairs are spaced further and further apart. Is this the end of the Han wave?"

"Even a chair-counting actuary could not figure this out."

"They lined up the chairs in this way on purpose to make them harder to count. Otherwise, it would be more obvious how few people there are." Meager crowd in front of stage itself before Han appeared. (PTT photo) Elderly Han fans decked out for the occasion. (PTT photo) Wu, Ha, and Ma on stage that night. (CNA photo)