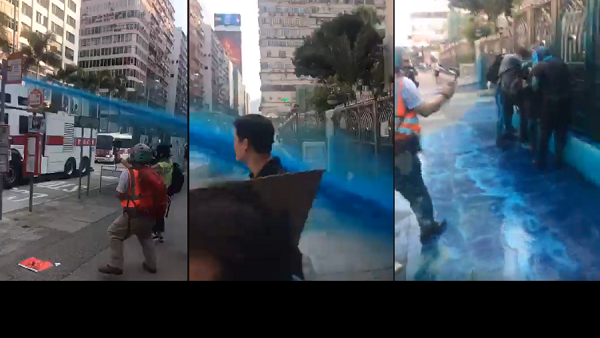 At around 4:00 p.m. on Nathan Rd., a Hong Kong police vehicle suddenly began to spray the water cannon at a small group of people standing in front of Kowloon Mosque, covering the steps of the mosque and bystanders with the blue dye. Later that evening, after receiving serious public criticism, the police department issued a statement on Facebook apologizing for the incident.

In the statement, the Hong Kong police said they had immediately contacted the mosque’s chief imam as well as leaders of the Muslim community in an effort to “clarify the situation and show (their) concern.” The District Commander of Yau Tsim District, Ho Yun-sing, along with Senior Superintendent Yu Hoi-kwan of the Police Public Relations Branch were also dispatched to the mosque that evening to smooth things over after footage of the incident went viral online and angered many Muslims in the city.

The initial footage of the incident, shared on Facebook by Hong Kong Legislater Jeremy Tam (譚文豪), can be viewed below.

The Hong Kong Police Department posted the following message on Facebook after its officers' actions elicited anger in the local community and online.

The police department also shared photos of District Commander Ho Yun-sing meeting with the mosque’s imam. Meanwhile, images of protesters and bystanders working together to help clean up the mess outside the Kowloon mosque were also shared widely on social media, as was a message of thanks from the Muslim Council of Hong Kong.