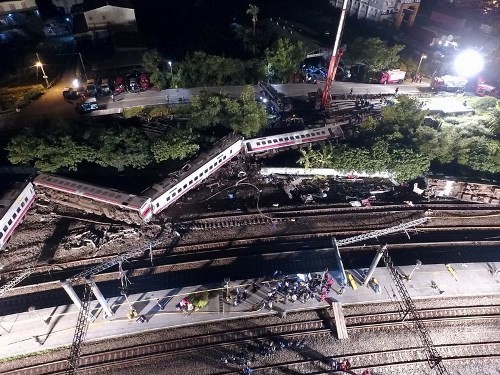 On the eve of the one year anniversary of a deadly train accident, Taiwan Railways Administration (TRA) announced it plans to sue the Japanese company that sold it the train.

Puyuma Express train No. 6432 derailed Oct. 21, 2018 in Yilan County while heading to Taitung from New Taipei, leaving 18 passengers dead and about 200 injured.

TRA plans to formally seek compensation from Sumitomo Corporation, the Japanese company that won the bid to supply the Puyuma train fleet in 2011, before the end of October, TRA deputy director-general Feng Sheng-hui (馮昇輝) said Sunday.

Feng did not reveal the amount it will seek in compensation, saying only that a law firm has been hired to file the suit, and a third party requested to serve as a technical witness.

The railway operating agency is currently withholding a NT$430 million (US$13.9 million) security deposit from Sumitomo.

According to an investigation report released by Taiwan's Executive Yuan a little more than one month after the accident, although there was mismanagement on TRA's part, the accident was caused by design flaws in the Puyuma. Notably, that included the air compressor system, which was directly involved in the crash after Sumitomo failed to fix it despite being previously notified of the issue.

Although the train was speeding while negotiating a curve, its air compressor malfunctioned and failed to tilt the train, the report showed.

It also said that Sumitomo failed to put TRA's remote monitoring system online, making it impossible to detect the train's Automatic Train Protection (ATP) system had been deactivated by the driver.

In April, TRA lawyers sent a letter to the Japanese company seeking damages. However, Sumitomo replied that TRA was responsible for related maintenance problems.

TRA purchased 19 Puyuma trains from Sumitomo, with a total of 152 carriages. The trains were delivered in batches beginning October 2012 and went into operation four months later.