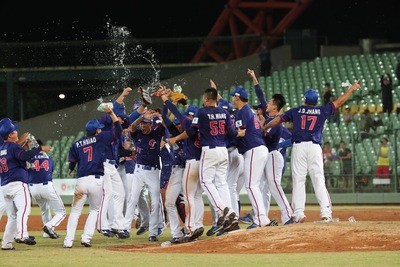 This marks the first No.1 finish for the national team, competing under the name Chinese Taipei, in the tournament since 2001. Taiwan took silver medals in the previous four editions of the event, which has been held every other year since 1983.

This year, after losing to Japan in the preliminaries, Taiwan's first baseman Chiang Chien-ming (姜建銘) and backup pitcher Liu Chih-jung (劉致榮) led the team to its first victory in 18 years.

According to Liberty Times, catcher Chang Chin-te (張進德) hit a triple after Japan scored the first run. This cleared the bases and gave Taiwan a 3-1 lead in the second inning.

However, the Japanese team racked up points against starting pitcher Teng Kai-wei (鄧愷威) and got another run in the bottom half. Japan’s Shohei Morishita then proceeded to hit a double to tie the game at 3-3 in the third inning.

Japan scored two runs against Taiwan’s second pitcher, Cheng Yu-hao (鄭祐豪), to lead 4-3. Then, in the fifth, Chiang hit a double and brought the score to 5-4, which it held until the end of the game.

While Teng did not strike anyone out in the third inning, backup pitcher Liu knocked two players out in the seventh, making him the night’s Most Valuable Player (MVP), according to CNA.

The gold is a qualifier for the 2020 Olympics. The top two finishers, excluding Japan who, as host of the games, automatically qualifies, will be able to participate in the Olympic Final Qualifying Tournament, which will take place in March or April in 2020.

Earlier in the day, China beat South Korea 8-6 to claim the bronze medal, reported Liberty Times, meaning that both sides of the Taiwan Strait can attend the qualifying tournament next year. Baseball is returning to the Olympic program for the first time since the Beijing Games in 2008.

Taiwan went on to beat South Korea and China 7-1 and 10-2 respectively in the next round to advance to the finals. The team's head coach Li Yingnan (李盈南) said, "I am very happy. Now everyone can breathe a sigh of relief since we have striven for the best results."

On Saturday evening, Taiwanese fans with a stuffed Winnie The Pooh doll and large Taiwanese flag made it onto the broadcast of the China-Taiwan game. Subsequently, the Chinese Taipei Baseball Association (CTBA) banned such flags and other items from Championship games, a move that was heavily criticized on online sports chat sites.