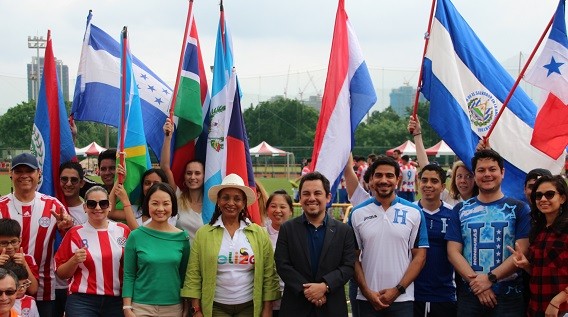 TAIPEI (Taiwan News) — The Copa America Taiwan and Latin Food Festival returned over the weekend (Oct. 19-20) for a vibrant celebration of the island's warm relations and exchanges with its Latin American allies, seeing the participation of students, entrepreneurs, and foreign dignitaries alike.

Taking place on the campus of New Taipei's Fu Jen Catholic University campus, this was the festival's sixth consecutive year, according to organizer Fernando Ramos. Contributing to the international array of flavors, which ranged from Mexican enchiladas to milky, rice-based horchata, were vendors from nine different countries.

During the opening ceremony, Ramos introduced the dignitaries at the event. The ambassador of Taiwan's longtime ally Belize, Diane Haylock, said in her remarks that, "We never think of all of the things that make up diplomacy," adding that, "Just as much as political diplomacy is important, so is economic diplomacy and, particularly, cultural diplomacy, and football is a very important activity in the life of the people of [Latin America] generally."

According to Alicia Medina, president of the Honduran Association and co-organizer of the event, approximately 600 Hondurans live in Taiwan. She added that many Hondurans who come to the island as students end up choosing to stay and go into business and that one aim of the association is to assist young entrepreneurs in making that first step.

Medina touted the maturing friendships Taiwan maintains with its Latin American allies. In particular, she mentioned that due to the growing popularity of coffee in Taiwan, a number of Guatemalans have in recent years begun importing coffee beans.

In an interview with Taiwan News, Guatemalan Ambassador Willy Gomez, who took up his post in August, spoke positively about Taiwan-Guatemala relations. He said, "What we share most are the values of serenity, democracy, and human rights. We really believe that we need to stand with Taiwan."

According to the ambassador, cooperation between the two countries spans the realms of agriculture, technology, health, education, and in particular, infrastructure. He cited the CA9, a major road connecting Guatemala city to the coast that was built with the assistance of Taiwan, as a "very good symbol of cooperation."

As further evidence of sound Taiwan-Guatemala ties, Gomez mentioned the previous week's visit by Guatemalan Vice President Jefeth Cabrara as well as the visit of President Alejandro Eduardo Giammattei, who met with President Tsai Ing-wen (蔡英文) on Monday. Regarding these bilateral ties, Gomez said Guatemala is focused on three main areas: adopting a more strategic approach to education, expanding the countries' business relationship, and building on their military partnership. Players vie for the ball in opening match.