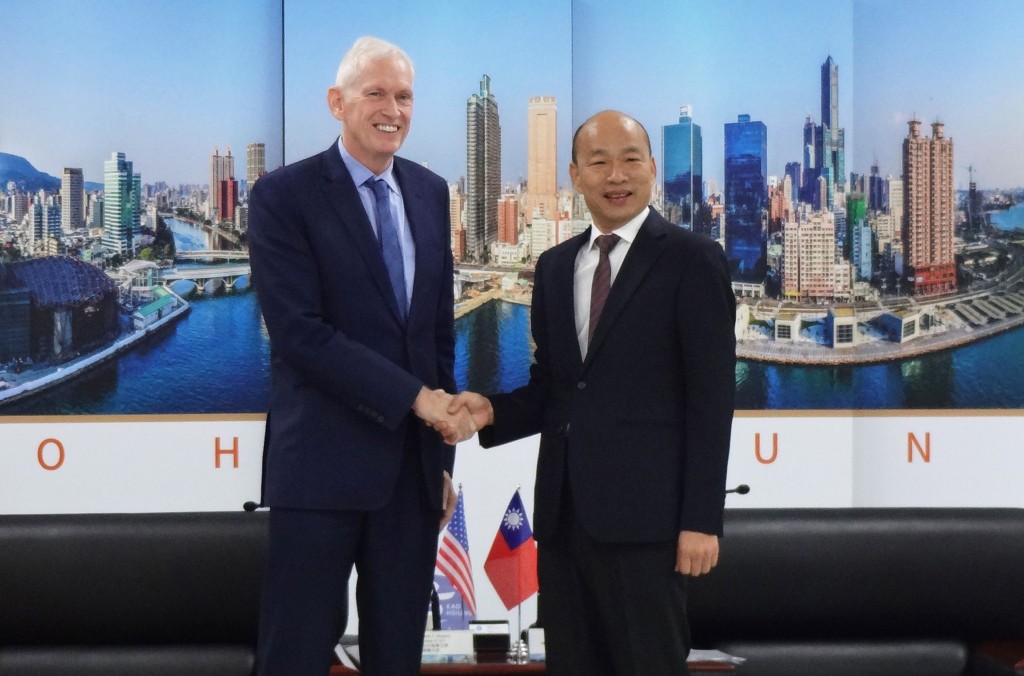 TAIPEI (Taiwan News) — Kaohsiung Mayor and Kuomintang (KMT) presidential nominee Han Kuo-yu (韓國瑜) met with the chairman of the American Institute in Taiwan (AIT), James Moriarty, on Friday, sparking speculation that they could be discussing the candidate’s U.S. trip planned for later this year.

Han, who on Wednesday (Oct. 16) took a three-month leave of office to focus on his presidential campaign, returned to the Kaohsiung City Government building Friday morning to meet with the AIT chairman, who has also met with President Tsai Ing-wen (蔡英文) this week. The meeting lent plausibility to earlier rumors that Han was planning to visit the U.S. in November, with some hypothesizing that the mayor could use this opportunity to discuss further details with the American officials.

However, Han’s campaign office spokesperson Ye Yuan-zhi (葉元之) declined to comment on the matter. Ye said Han and his aides have not reached any final decision about making a trip to the U.S.

Han and Moriarty met behind closed doors, but both made brief remarks before the meeting. Han expressed his gratitude for the U.S.’s support for Taiwan, emphasizing that the U.S. is “the most important and unwavering ally” for the country.

Moriarty said he was glad to make his third visit to Kaohsiung since taking office in 2016, and he thanked the mayor for his warm welcome. He said he looked forward to consulting Han with city government affairs and the future plans for Kaohsiung.

Han added that he had put on a new suit specifically for the occasion, as he was very pleased to meet with Moriarty. He compared himself to Taiwanese children who wear new clothes and shoes for Lunar New Year.