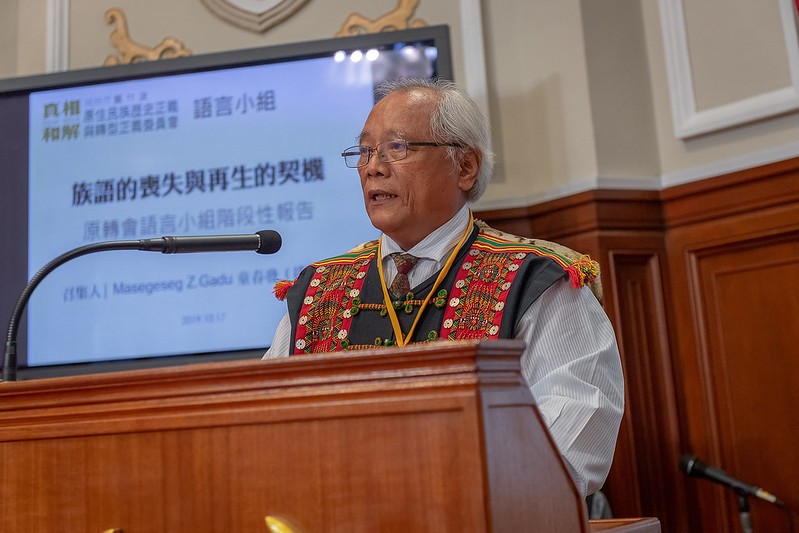 TAIPEI (Taiwan News) — On Thursday (Oct. 17), the Presidential Office received its first presentation given entirely in the language of Taiwan’s Paiwan people, marking an important milestone on the road to preserving indigenous languages on the island.

President Tsai Ing-wen (蔡英文) hosted the 11th Indigenous Historical Justice and Transitional Justice Committee on Thursday afternoon. Established shortly after Tsai took office in 2016, the committee consists of experts, scholars, and representatives of indigenous communities and aims to investigate the instances of oppression experienced by Taiwanese indigenous peoples in the past while promoting their rights and cultures.

During the two-hour meeting, land matters and language promotion were discussed. Masegeseg Z. Gadu, who convened the committee’s language preservation group, delivered a presentation on the loss and revival of indigenous languages in the Paiwan tongue, with the Chinese interpretation provided simultaneously via headset.

This was the first time a Presidential Office meeting has included an indigenous language accompanied by interpretation adopting international conference standards, according to CNA. Tsai expressed her appreciation for Masegeseg, who is a professor at National Dong Hwa University, adding that she was very much touched by the presentation.

The president also instructed relevant government agencies to continue promoting the preservation of these languages through indigenous communities as well as educational and cultural programs. The languages of the 16 indigenous peoples of Taiwan were listed as national languages in 2017, which guarantees their use in public institutes without discrimination.