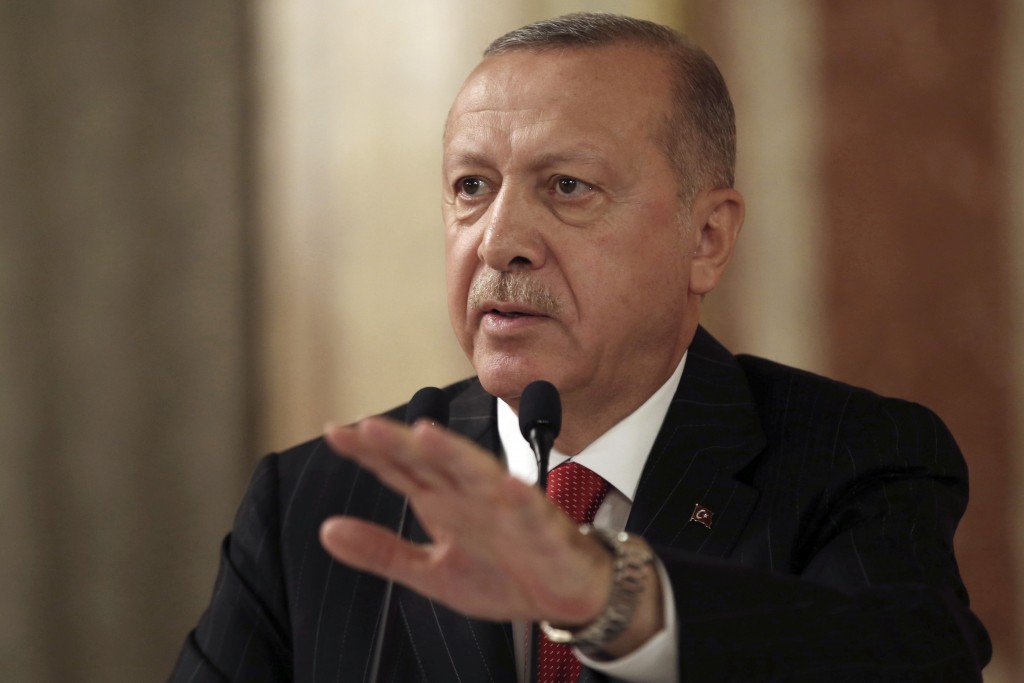 FRANKFURT, Germany (AP) — The sanctions the U.S. announced against Turkey this week over its offensive in Syria fall well short of doing serious damage to an economy still healing from a recession and currency collapse.

President Donald Trump could take far tougher action that would deter foreign investment and credit that Turkey badly needs — but doing so could backfire in a number of ways, and it's not clear he really wants to.

Trump has said he could "destroy and obliterate" the economy of Turkey if it ignores U.S. demands which include a ceasefire in its military action in northern Syria. The sanctions announced Monday, however, fall short of that rhetoric and were seen as minimal by analysts and financial investors.

The measures were limited to the Turkish defense and energy ministries and three Turkish officials, the ministers of defense, energy and interior security. They block transactions involving any assets they may have in the U.S. financial system and bar U.S. residents and businesses from dealing with them. The U.S. also raised tariffs on Turkish steel exports from 25% back to 50%, where they were in May, and suspended talks over a U.S.-Turkey trade deal.

Given the dominant role that U.S. financial institutions and the dollar play in world commerce, such measures fall far short of what the U.S. could do by targeting Turkey's banks and their links to the global financial system. Turkey's currency and stock market both rose Tuesday as investors breathed a sigh of relief that harsher measures were not imposed.

Timothy Ash, emerging market strategist at Bluebay Asset Management, called the sanctions "minimal" and "window dressing," noting that the trade deal was years off in any case.

One risk from the current sanctions, Tuvey said, is that they may be a prelude to tougher ones, given support in Congress for action against Turkey.

And even though the direct impact on the economy may remain slight, the bigger risk could be on investor and financial market confidence in the country. The imposition of sanctions has re-started talk of Turkey possibly putting limits on the flow of money to prevent it from being taken out of the country. That could support the country's currency but deter foreign investors.

"If Turkish financial markets do come under fresh downward pressure, the resulting tightening of financial conditions will stifle the recovery from last year's recession. The impact would probably be a lot more severe if sanctions are expanded to include Turkey's financial sector," Tuvey wrote in a research note.

Trump's move against Turkey does not come close to sanctions against Iran, where the U.S. persuaded the international financial messaging system SWIFT to cut off Iranian banks. The U.S. re-imposed the sanctions as it withdrew from a deal limiting Iran's nuclear programs.

That said, Turkey's economy remains vulnerable despite returning to economic growth after a recession and currency plunge in 2018. Its currency, the lira, has recovered and a strong tourism season this summer helped reduce the net outflow of money and investment.

The country is still plagued by double-digit inflation and the International Monetary Fund said last month that economic stabilization "remains fragile." Many companies owe money in foreign currency, leaving them vulnerable to another drop in the lira.

German automaker Volkswagen said Tuesday it was postponing a decision on where to locate a new production plant. German media have reported that Izmir in western Turkey was the leading candidate over sites in Bulgaria and Serbia.

Josef Braml, head of the Americas program at the German Council on Foreign Relations, said that Trump appears to be trying to get ahead of calls for sanctions from Congress amid resentment among security officials over Trump's decision to give Turkey a green light to invade a strip of northern Syria to create a buffer zone. The military action is aimed at Kurdish fighters whom Turkey considers terrorists but who have been U.S. allies fighting Islamic State.

Braml said that much may depend on what kind of understanding Trump reached with President Recep Tayyip Erdogan before giving him the free hand to send troops in. "He didn't sell the Kurds for nothing," Braml said.

Tougher sanctions risk unintended consequences, such as pushing Turkey closer to China. Trump did not impose sanctions on Turkey even after Erdogan last month defied the U.S. over buying oil and gas from Iran.

Trump appears to want to appear tough on Turkey to pre-empt questions from Congress and the U.S. security services over the implications of his decision to let Turkey attack the Kurds in Syria, Braml said: "It's always better, if you have a revolt against you, to get ahead of it. You appear as the strong man who is doing sanctions, otherwise Congress would force him to do something."

The open question, Braml said, is "whether he's really serious about using the full arsenal - if it's just window dressing or is he more serious."