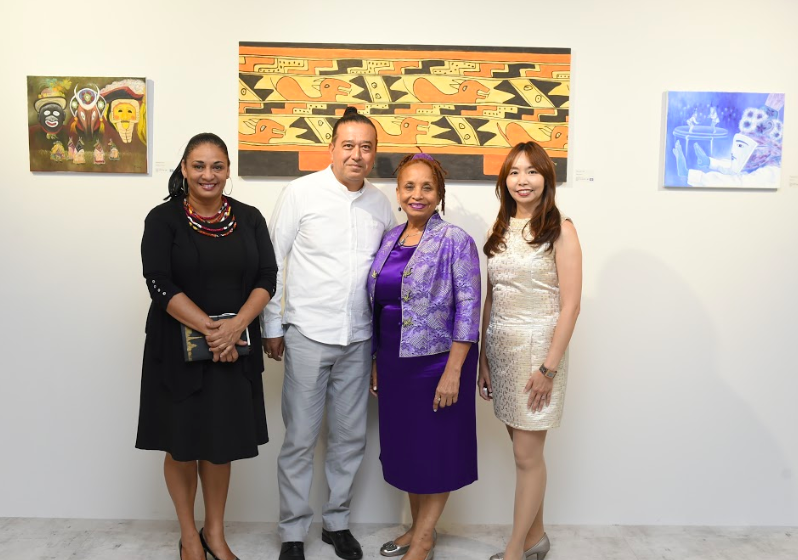 TAIPEI (Taiwan News) — The Embassy of Belize in Taiwan is hosting a series of cultural events to celebrate the 30th anniversary of diplomatic relations with Taiwan.

Celebrations got underway when the Embassy of Belize hosted a dinner party on Oct. 9, at which Belizean chef Sean Kuylen and a Taiwan Digout Bar & Caffe bartender provided the food and drinks. The Ambassador of Belize, Diane Haylock, and Taiwan Vice President, Chen Chien-jen (陳建仁), attended the event. To mark three decades of friendship that will stand the test of time, according to an Embassy of Belize press release, there will also be an art exhibition, concert, and food festival. The art exhibition featuring two Belizean artists, Rachael Heusner and Fernando Cruz, opens on Tuesday (Oct. 15) at Yuan Ru Gallery and runs until Nov. 3.

“Rachael and Fernando’s styles are very different, but they similarly represent their views on aspects of Belizean life,” the embassy’s press release stated, adding, “Rachael ponders the simplicity, beauty and ethos of everyday life in Belize and the Caribbean. Fernando’s style is more eclectic, covering diverse subject matters and style, though portraiture is a regular feature in his work.”

In addition, the Central America Trade Office will jointly host a concert with the Chinese Music Department of National Taiwan University of Arts, by the Belizean band “Garifuna Collective." The concert will take place on Thursday (Oct. 17) at the university and entry is free.

The food festival, "Taste of Belize," will feature chef Sean Kuylen preparing central American fare at the Far Eastern Plaza Hotel Café, until Oct. 27. Roundtrip tickets to Belize can be won during the festival.