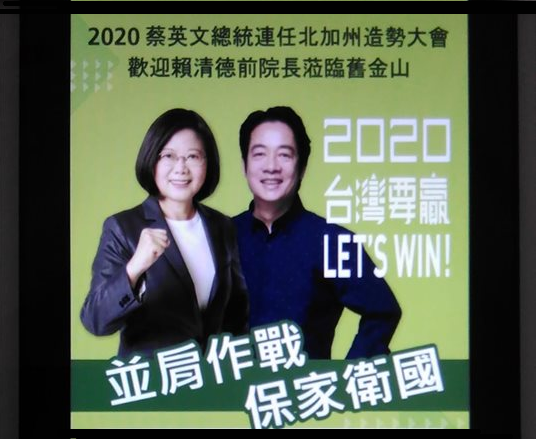 TAIPEI (Taiwan News) — Former premier and Democratic Progressive Party primary candidate William Lai (賴清德) is in the United States this week where he is campaigning among Taiwanese-American communities for the re-election of President Tsai Ing-wen (蔡英文).

Lai was met by a crowd of enthusiastic supporters when he arrived in San Francisco on Monday, one of his first public appearances since the DPP primary. Lai will attend several events in the U.S. this week, including a banquet hosted by the Northern California Friends of Tsai on Tuesday (Oct. 15) to promote Tsai Ing-wen in the upcoming election.

The slogan of the California event is “Taiwan wants to win” (台灣要贏), in which the character for “win” is a homonym for the second part of Tsai's given name. Lai told the crowd that greeted him in San Francisco that everyone must unite behind the president to safeguard democracy and freedom in Taiwan.

After the banquet on Tuesday, Lai will also make stops in Chicago, Washington D.C. and New York, before returning to Taiwan next week, reports Liberty Times.