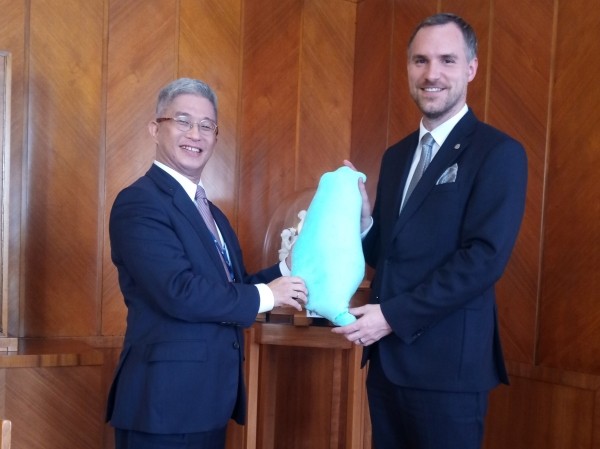 During's Hsu's visit, Prague City Council members said that because Beijing has failed to respond to their request to re-negotiate wording relating to the "one China policy" in the partnership agreement, the Czech capital is in the process of terminating its sister-city relationship with the polluted communist megapolis.

While attending the Forum 2000 meeting in Prague on Monday, Hsu also met with Michaela Krausova, head of the Pirate caucus at the Prague City Council; Jakub Michalek, chairman of the Pirate group in the Czech Chamber of Deputies; and Martin Hala, director of sinopsis.cz, reported CNA. On Oct. 4, it was reported that Prague was planning to cancel its sister-city relationship with Beijing, which became a focus of talks between Hsu and his Czech counterparts.

Krausova was cited by CNA as saying that when Chinese President Xi Jinping visited the Czech Republic for the first time in 2016, she was arrested for waving a Tibetan flag. She said that Adriana Krnacova, then mayor of Prague, unexpectedly signed a sister-city agreement with Beijing and promised to abide by the "one China policy" and accept the spurious claim that "Taiwan is part of China's indivisible territory."

Krausova said she was infuriated by the move and that once she became an elected member of Prague's City Council, she proposed to have the "one China policy" clause removed during a council meeting late last year. Because Beijing chose to completely ignore Prague's request to remove the clause their agreement, Prague has decided to terminate its relationship with Beijing, said Krausova.

Michalek said that there was considerable controversy over the clause when it was first proposed and that the council had to vote twice to finally ratify the sister-city agreement, according to the report. He stressed that recent discussions about the clause have revealed that it is quite rare in such agreements, even between Beijing and other cities.

Hsu shared with Hrib and other Prague leaders his experience battling fake news. He said that because Taiwan is holding a presidential election early next year, the government has had to pass legislation to punish disseminators of fake news.

Hala stated that the Czech Republic has been affected by fake news from Russia and that social media platforms such as Facebook are particularly vulnerable to the dissemination of disinformation. He said that he believed the best solution is to strengthen media literacy among the people.