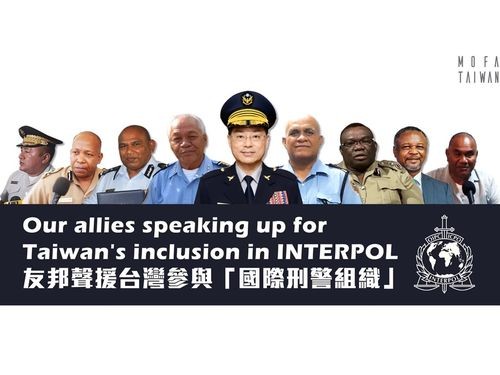 International allies expressed support for Taiwan's participation in the International Criminal Police Organization (Interpol) ahead of its four-day General Assembly which will be held in Chile beginning Tuesday.

The Interpol will hold its 88th General Assembly in Chile from Oct. 15 to 18. Taiwan, which is currently not a member of the international police organization, has asked to participate as an observer, but the request is likely to be ignored.

It has received some support internationally for its desire to participate, however.

On Oct. 11, Taiwan's Ministry of Foreign Affairs uploaded a two-minute video that showed high-level police and public safety officials from eight of Taiwan's diplomatic allies speaking up for Taiwan.

"Taiwan can help us toward a safer world, through its participation in Interpol," Carlos Escobar, director general of Guatemala's National Civil Police, said in the video.

On Sept. 10, 47 U.S. Congressmen wrote a joint letter to U.S. Attorney General William Barr and Secretary of State Mike Pompeo, asking the Trump Administration to engage in a new strategy to combat China's refusal to allow Taiwan to gain observer status in Interpol.

Interpol has ignored Taiwan's request and international support for the country.

"Taiwan's Criminal Investigation Bureau wrote a letter to Interpol President Kim Jong-yang in January, but has not received any response to date," a source familiar with the matter told CNA.

Participation is important, a police department source said, because several foreign criminals have evaded arrest in Taiwan because Taiwan cannot access the I-24/7 Global Police Communications System, which gives access to Interpol's databases for cross-border anti-crime and security purposes.

In April, an Iraqi killed his parents-in-law in Taiwan, and Taiwan police needed four months to solve the case that could have been solved in one to two weeks if Taiwan received assistance from Interpol.

The Republic of China, the official name of Taiwan, joined Interpol in 1961, but was forced to withdraw due to the arrival of China in 1984.