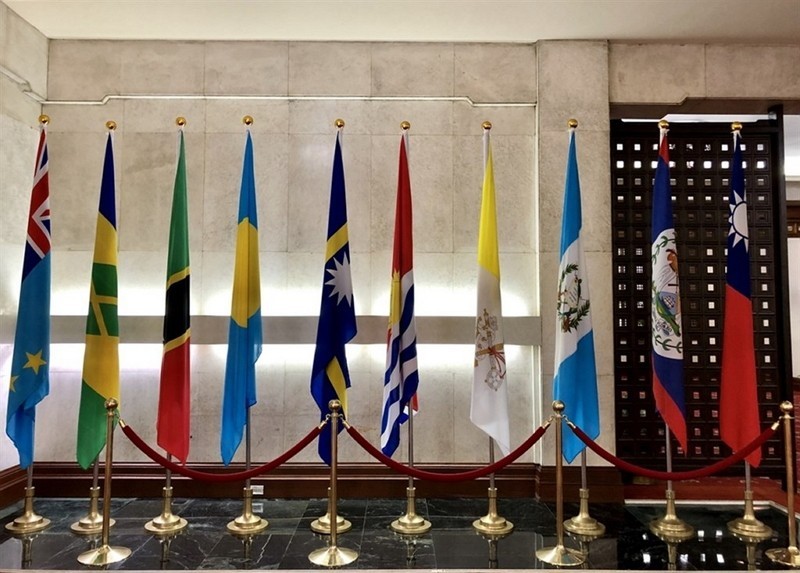 In September 2019 both Solomon Islands and Kiribati ended diplomatic relations with Taiwan (formally the Republic of China), leaving the country with formal recognition from only 15 countries.

This follows the departure since 2016 of five other diplomatic partners: Sao Tome and Principe, Panama, Burkina Faso, the Dominican Republic and El Salvador. But the importance of this may be overstated.

The underlying problem for Taiwan is one of sovereignty. Although Taiwan displays the standard requirements of a state laid out in the Montevideo Convention (such as control over its territory and a stable population), it lacks recognition from most other states because the People’s Republic of China (China) views Taiwan as a renegade province that must eventually reunify. As China is opposed to dual recognition, where a country could establish formal relations with both Taiwan and China, countries must choose.

With China’s growing economic and political influence, and a willingness to provide expansive aid packages, Taiwan remains at a severe disadvantage. And since Taiwan’s election of Tsai Ing-wen from the traditionally pro-independence Democratic Progressive Party as President, China has increased its efforts to isolate Taiwan diplomatically. The United States has responded to China’s efforts in several ways. For example, the United States responded to Solomon Islands breaking relations by canceling a meeting between US Vice President Pence and Solomon Islands Prime Minister Manasseh Sogavare, while members of Congress suggested connecting international aid for Taiwan’s diplomatic partners to continued recognition. However, much like similar threats after recent departures from Central America and the Caribbean, it is unclear to what extent this will change behavior.

But what happens if Taiwan’s remaining 15 diplomatic partners leave?

This concern of a domino effect arises nearly every time a country breaks relations with Taiwan, yet this fear of total diplomatic isolation never materializes. Taiwanese officials worried about such isolation after the United States switched recognition to China in 1979 and at the end of the Cold War when ideological opposition to China waned.

To prevent diplomatic isolation, Taiwan offered international aid to maintain partnerships or convince states to break off relations with China, a practice pejoratively referred to as "dollar diplomacy."

Chinese officials also likely realize that if all of Taiwan’s diplomatic partners leave, this could encourage controversial actions from a Taiwanese administration that China would certainly oppose. This could include constitutional reform to rename Taiwan the "Republic of Taiwan" if no country recognizes the "Republic of China."

The intention of China’s efforts to lure away Taiwan’s diplomatic partners may not be Taiwan’s total diplomatic isolation, but rather a tool to undermine support for Tsai’s re-election in 2020.

Still, recent Taiwanese losses and the bleak prospect of Taiwan not being able to convince any country to break relations with China raises the possibility that more of the remaining 15 may leave. Economic factors such as exports as a percentage of GDP incentivize countries to recognize China over Taiwan, while ongoing research suggests that countries in debt are also more likely to recognize China. Regional strongholds for Taiwan — Central America, the Caribbean and Oceania — no longer appear secure, despite efforts at embedding Taiwan in intergovernmental institutions in the region.

Taiwanese offers of international assistance are also unlikely to be enough to stave off losses now that China is willing not only to offer larger assistance packages but ones beyond the scope Taiwan traditionally provides. For example, China offered Kiribati US$500 million in assistance to purchase commercial airplanes after Taiwan earlier rejected the request.

While Taiwan can redirect aid initially allocated to Solomon Islands and Kiribati to countries that maintain relations, Taiwan still faces economic constraints that favor countries recognizing China. Even if there are countries still willing to consider switching recognition to Taiwan in exchange for aid, this incentivizes countries to view diplomatic recognition as a bidding war for short-term gain rather than a deeper interest in Taiwan.

Even if all 15 diplomatic partners leave, the substantive impact on Taiwan may be small.

Formal relations provide several benefits such as having these countries speak for Taiwan in intergovernmental organizations to which Taiwan is not a member (such as the United Nations). But this loss of formal recognition ignores the substantive impact of informal relations.

Taiwan maintains unofficial relations with virtually every major power; many states have offices in Taiwan that function as embassies in all but name and similar Taiwanese offices exist abroad. Taiwanese passport holders also have visa-free or preferential visa treatment from 166 countries compared to 21 for Chinese passport holders. China will have great difficulty severing these unofficial ties even if Taiwan faces formal diplomatic isolation.

Taiwanese public opinion about diplomatic recognition is also commonly overlooked in this discussion. While the opposition party Kuomintang has called for the resignation of the Minister of Foreign Affairs Joseph Wu due to these recent losses of formal recognition, the Taiwanese public over time has come to accept diplomatic losses as the norm.

The public is particularly sensitive to maintaining diplomatic relations if doing so means that countries will ask for more aid. Scandals associated with ‘dollar diplomacy’ in the past are well known, and a segment of Taiwanese voters would prefer that diplomatic aid money be spent at home.

Taiwan will continue to maintain international relevance with or without formal diplomatic recognition. But this requires creative actions by Taiwan to deepen unofficial relations with non-recognizing states like the United States and Australia and to enhance person-to-person diplomatic efforts. The myopic focus on Taiwan’s formal recognition perpetuates a victimization narrative that ignores the depth of unofficial relations and how the Taiwanese public views diplomatic relations.