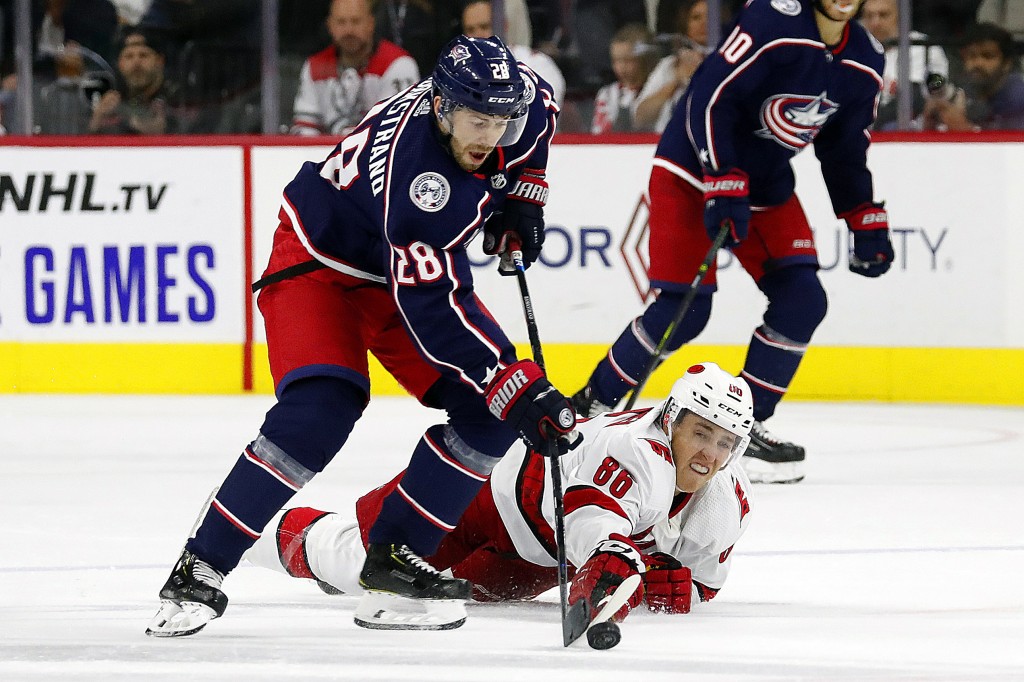 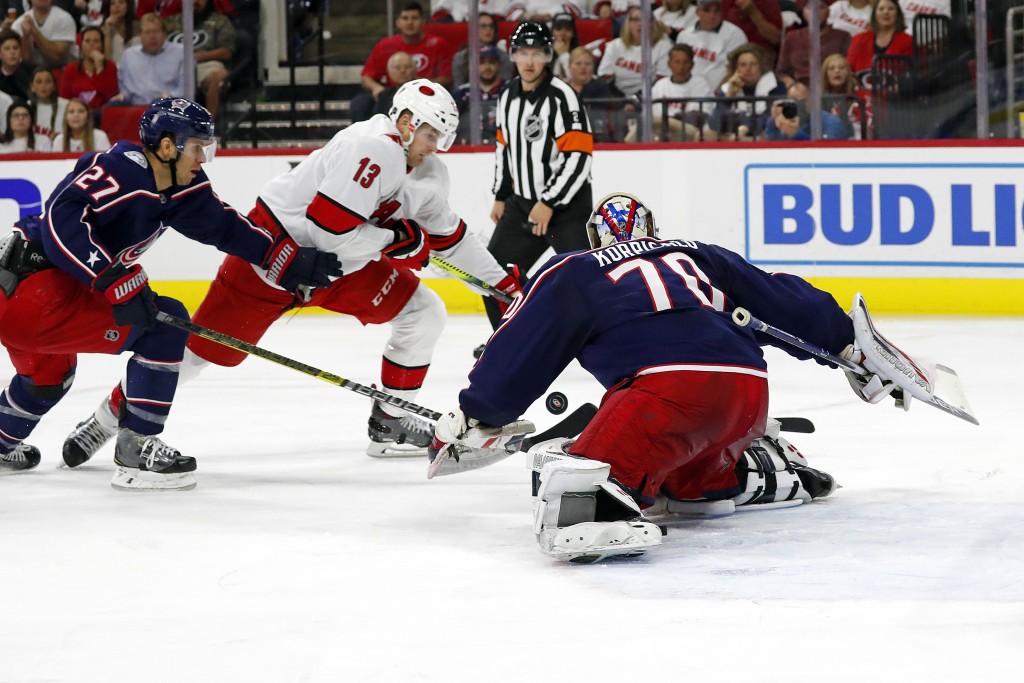 Dubois overpowered Brock McGinn on a rush from the opposite blue line and lifted a backhander past James Reimer, snapping a 2-all tie 75 seconds into the third period and Columbus made the lead stand up.

Joonas Korpisalo stopped 30 of 32 shots and Ryan Murray and Alexander Wennberg each had two assists for the Blue Jackets.

Erik Haula and Dougie Hamilton scored for the Hurricanes, who entered the game with a 5-0-0 record for the first time in franchise history. Carolina had outscored its opponents 11-5 in the last two games.

Iafallo got his first goal of the season on a rebound of Dustin Brown's shot before Brown and Drew Doughty added empty-net goals seven seconds apart, sending the Kings to the 1,000th home victory in franchise history and a wild start to their 20th season at Staples Center.

Ilya Kovalchuk and Michael Amadio each had a goal and an assist. Anze Kopitar and Kyle Clifford also scored for the Kings.

Viktor Arvidsson, Matt Duchene and Colton Scissons scored in the first 11 ½ minutes of the third period for the Preds. Mikael Granlund also scored, while Ryan Ellis and Ryan Johansen had two assists apiece.

NEW YORK (AP) — Connor McDavid scored the tiebreaking goal and Leon Draisaitl had two goals and an assist, all in the third period, as Edmonton beat New York and extended its season-opening win streak to five games.

Oscar Klefbom had a goal and an assist, McDavid also had an assist, and Mike Smith stopped 20 shots to help Edmonton complete a sweep of the New York area teams.

Edmonton, 5-0-0 for the first time in 34 years, became the first team in NHL history to win its first five games after trailing in each.

Rookie Kaapo Kakko had his first NHL goal for the Rangers, who had won their first two games but were playing for the first time in a week. Henrik Lundqvist finished with 23 saves.

OTTAWA, Ontario (AP) — Vladislav Namestnikov scored his first two goals for his new team late in the third period and Ottawa beat Tampa Bay for its first win of the season.

It was the third-straight game the Senators faced a backup goalie, as McElhinney started for the Lightning instead of reigning Vezina Trophy winner Andrei Vasilevskiy.

BOSTON (AP) — Tuukka Rask stopped 31 shots in his 46th career shutout, leading Boston to a win over New Jersey in its home opener.

Brad Marchand, Joakim Nordstrom and Patrice Bergeron scored in the Bruins' first game on home ice since losing 4-1 in Game 7 of the Stanley Cup Final against the St. Louis Blues in June. Boston won its first three road games this season before a 4-2 loss at Colorado on Thursday night.

The Canadiens, playing their third game in four nights, earned their first regulation victory of the season.

With the game tied at 1, Toronto's Kasperi Kapanen flipped the puck up the ice, and Mikheyev appeared to have a step on Detroit defenseman Madison Bowey as the two chased it. Howard came well out of his net, hoping to beat Mikheyev to the puck, but the rookie forward got there first, stickhandled to his left and shot into the empty net with 29.5 seconds left in the period.

Anders Lee and Josh Bailey scored in regulation for the Islanders. Semyon Varlamov, signed to a four-year, $20 million deal in the offseason, stopped 35 shots through overtime and all three Florida attempts in the tiebreaker to pick up his first win with New York.

Evgenii Dadonov had a goal and an assist, Denis Malgin also scored, and Sam Montembeault stopped 26 shots through overtime in his first start of the season for Florida. The Panthers lost in a shootout for the second straight game to fall to 1-2-2 through five games.

The Panthers outshot the Islanders 12-9 in the first 20 minutes but failed to capitalize on the power play, squandering three opportunities.

Scheifele beat Robin Lehner from high in the slot with a shot that sailed past the goalie's outstretched glove after taking a pass from Blake Wheeler. Scheifele has a goal and five assists in his last three games.

Brandon Saad scored short-handed and Brent Seabrook had a power-play goal for Chicago. Lehner, a Vezina Trophy finalist with the New York Islanders last season and signed to a one-year contract during the summer, finished with 30 shots in his Blackhawks debut as they fell to 0-3-0.