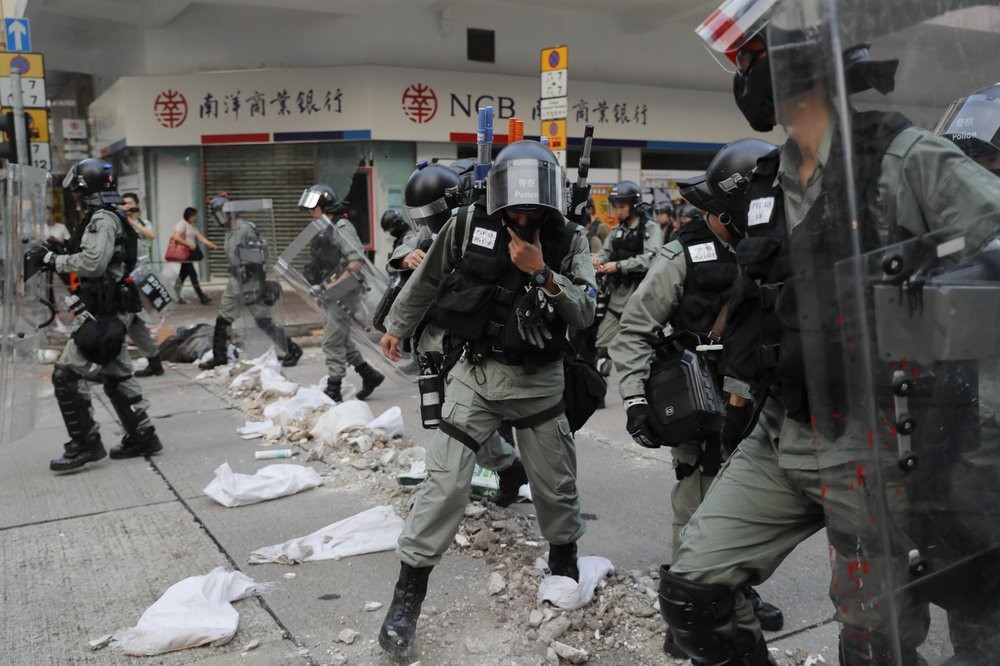 As a police van sped past them, the 90-year-old woman and her 60-year-old daughter raised their fists, pointed their thumbs very deliberately down and yelled, “Triads!”

That silver-haired women in Hong Kong no longer think twice about openly accusing officers of being in cahoots with mafia gangs shows how public trust in the city’s 30,000-strong police force, once considered among the finest in Asia, has been catastrophically damaged in the storm of protest gripping the international business hub.

In trying to end the anti-government demonstrations, which broke out in multiple locations again on Saturday and are now in their fifth month, one of the most pressing problems to solve for Hong Kong leaders will be dispelling the now widespread public scorn for police officers. Protest graffiti likening officers to dogs and worse is all over the city, and protesters Saturday chanted for the force to be disbanded.

Overall, Saturday’s rallies were lower-key and more peaceful than other far larger and more violent protests that have rocked the semi-autonomous Chinese territory. Riot police deployed but stayed far behind the day’s largest rally, which drew thousands of peaceful marchers in Kowloon.

Police said rioters tossing gasoline bombs damaged a subway station, but there was no repeat of the more intense destruction and battles between protesters and police that have spread across Hong Kong.

Still, restoring any semblance of trust between police officers and the 7.5 million people they are sworn to serve and protect is going to be a long, hard battle.

Demonstrators widely decry the force’s policing of the hundreds of protests that began in early June as thuggish, with more than 2,300 people arrested. Its liberal use of tear gas and what has become a familiar sight of officers in full riot gear pursuing young protesters and making muscular, sometimes brutish arrests has come as a shock to a city that long prided itself on being safe.

“They beat the butts out of people,” said the 90-year-old woman, Cheng Liang Yu, who angrily shouted at the passing police van with her 60-year-old daughter, Dorothy Lau.

One of Lau’s daughters is a part-time police officer. Lau has her photo, proudly saluting in her police uniform, stored on her cellphone. But she was equally dismissive of the force her daughter serves.

“They’re too violent,” she said.

Together with another of Lau’s daughters, Liz Yuen, the women joined a protest of about 200 people, many of them retirees, outside the towering police headquarters in central Hong Kong on Saturday. The peaceful rally held a minute’s silence for victims of what protesters described as police abuse. Photos taped on the sidewalk showed X-rays of fractured bones that protesters alleged were broken in police custody.

Patrolling discreetly in their midst, a handful of plainclothes police officers tried to break the ice. They stopped traffic to allow elderly protesters, some with walking sticks, to cross a busy road to join the sit-in rally.

“The police and the triads are brothers!” yelled 75-year-old Chiu Shuitin, directing his anger directly at officers who shuffled silently away. “The police don’t protect us anymore!”

One of the plainclothes officers said the past few months have been tough on them, too. He said he worries that people who know he’s an officer might leak that fact, along with his name and address, on the internet, so protesters can target him and his family. To lower his profile outside of work, he said he’s now in touch with only a small circle of his closest friends.

He lamented that protesters who used to target officers with nothing more dangerous than paper planes now hurl bricks and gasoline bombs.

“That’s very sad,” said the officer, who didn’t want to be identified because he wasn’t authorized to give media interviews. “How can we talk?”

One of the protest movement’s key demands is for an independent inquiry into the policing methods deployed against protesters and widely held conspiracy theories — repeatedly and strongly denied by the police force — that detainees have died in custody.

But protesters are also pessimistic that Hong Kong’s leader, Carrie Lam, will bow to that or other demands, including universal suffrage. She is scheduled to deliver her annual policy address on Wednesday. If demonstrators don’t turn out in force for that, it could be another hint — along with the toned-down rallies on Saturday — that the movement may be losing a little steam.

A 58-year-old teacher of English and history at the protest outside the police headquarters said she’d been terrified by the increase in violence this month, which included two police shootings of teen-aged demonstrators who were injured. She said trust in the police would take “a million years to rebuild.” The teacher said she didn’t want to be identified by name because her school wants “all the staff to stay absolutely silent.”