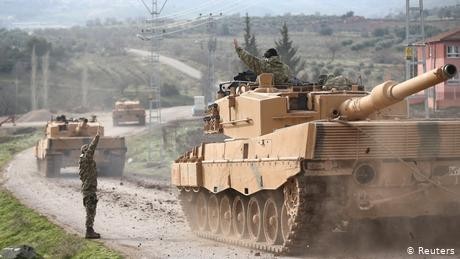 "Given the background of the Turkish military offensive in north-eastern Syria, the Federal Government will not issue any new permits for any military equipment that could be used in Syria by Turkey," Maas told Bild am Sonntag.

Read more: Can the EU-Turkey deal be fixed?

Maas said the German government had implemented a very restrictive route for arms exports to Ankara since 2016, especially after the Turkish military offensive against the northern Syrian region of Afrin.

However, an arms export ban has not yet been imposed.

Germany exported arms worth €243 million ($268 million) to Turkey in 2018, making up almost one third of all German weapons exports, according to Bild am Sonntag.

Turkish Foreign Minister Mevlüt Cavusoglu told DW that if Germany was to impose an arms embargo, it would only make Turkey stronger.

"Let me put it this way: This is a vital question for us and a question of national security, a question of survival," Cavusoglu said. "No matter what anyone does, no matter whether it is an arms embargo or anything else, it only strengthens us."

"Fifteen years ago we produced only 20% of the goods we needed, now we produce over 70% — all this only strengthens us," he continued.