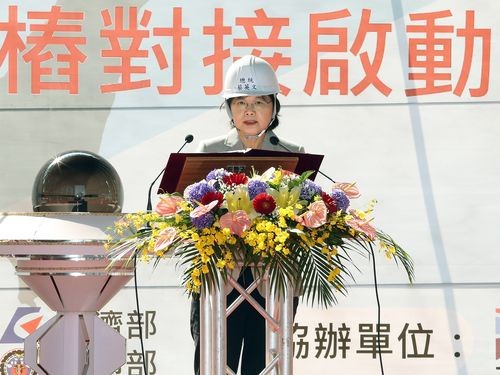 A ceremony to mark the completion of Taiwan's first underwater pin piles assembly for its offshore wind turbines was held at the port in Bali District, New Taipei, on Saturday.

Speaking at the ceremony at Port of Taipei, President Tsai Ing-wen (蔡英文) said green energy will allow Taiwan to generate revenue from all over the world, and her administration will continue its efforts to develop the industry, despite the challenges.

The renewable energy sector can be likened to the country's high-speed railway system, which at first was heavily criticized as not being sustainable but later was praised and used by everyone, Tsai said.

She said that when Taiwan's first offshore wind farm begins commercial operations, it will mark a huge milestone in Taiwan's efforts to develop green energy.

The pin piles assembly is the first step, as Taiwan works toward having all underwater structures and components for its offshore energy projects manufactured domestically, Tsai said.

Offshore wind energy has the potential to become a NT$1.2 trillion a year industry in Taiwan, providing additional jobs, she said.

For example, Tsai said, the pin piles assembly project has directly and indirectly helped to create 300-500 jobs at higher than average pay.

By 2025, when Taiwan goes nuclear-free, green energy is expected to account for at least 20 percent of the country's domestic energy needs, according to Tsai.

Also speaking at the ceremony, Lai Wen-hsiang (賴文祥), head of the company contracted to carry out the pin piles assembly work, said the manufacture of the relevant underwater structures and components has become a huge business internationally in recent years, driven by an expanding market.

Denmark, the Netherlands, Italy and Germany are all working to manufacture such products amid growing domestic demand, said Lai, chairman of Century Iron and Steel Industrial Co.

Against that backdrop, he said, his company has invested NT$6 billion in an assembly plant at Port of Taipei.

Founded in 1987 and headquartered in Taoyuan, the company specializes in the manufacture of steel structures for a variety of projects. In 2018, it signed a deal with Copenhagen Infrastructure Partners K/S to build the underwater infrastructure for two wind power generators off the coast of Changhua County.