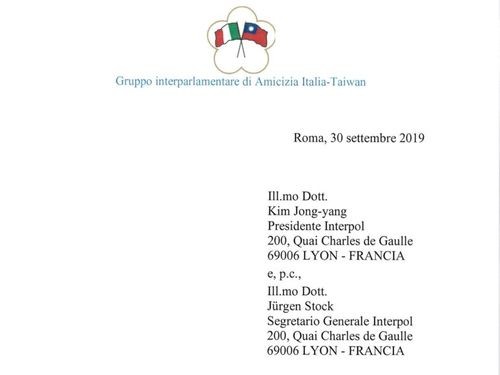 Parliamentarians in the United Kingdom and Italy recently called on the International Criminal Police Organization (Interpol) to invite Taiwan to attend its General Assembly as an observer so that Taiwan cam make concrete contributions.

In the U.K., Nigel Evans and Lord Rogan, co-chairs of the British-Taiwanese All-Party Parliamentary Group, issued a joint statement, saying their group has long supported Taiwan's meaningfulparticipation in international organizations.

"… We were dismayed to learn that Taiwan has yet to be invited to participate in the upcoming 88th Interpol General Assembly in Chile as an observer due to unnecessary political considerations," the two British parliamentarians said in the statement. "We believe this will in turn obstruct the collective interests of the international community."

Citing Article 2 of Interpol's Constitution, Evans and Rogan said Interpol's aims are to ensure and promote the widest possible mutual assistance between all criminal police authorities around the world.

"Transnational crime is rampant in today's globalized world, thus we must establish a reliable and seamless global law enforcement network without gaps," the two parliamentarians said. "To this end, the cooperation of police authorities from all over the world is indispensable, and Taiwan's presence is essential to the realization of this objective."

Taiwan's population of 23.5 million is bigger than that of more than 100 Interpol member countries, and it is a major hub for the movement of capital, goods, and people, with more than 68.9 million passengers passing though in 2018 alone, they said.

"Its continued exclusion from Interpol undermines the globalendeavor to fight terrorism, illicit drugs, telecom fraud,cybercrime, and other new forms of transnational crime, diminishing the effectiveness of the international law enforcement network."

The parliamentary group, therefore, supports Taiwan's participation in Interpol, in its general assembly as an observer and in its meetings, mechanisms and activities, according the statement.

In response, Taiwan's representative to the U.K. David Lin (林永樂) thanked the British-Taiwanese All-Party Parliamentary Group for its strong support of Taiwan's participation in international organizations.

The letter was initiated by Italian Senator Lucio Malan, who heads the Italy-Taiwan Parliamentary Friendship Group, and his two deputies Marco Di Maio and Alessandro Pagano.

The 16 Italian parliamentarians said that without participation in Interpol, Taiwan cannot gain access to the global criminal databases through the organization's I-24/7 police communications system or other communications channels.

This exposes Taiwan to international criminal activity and leaves a loophole in the global security network, they said, adding that Taiwan's exclusion from Interpol was purely a political issue.

Taiwan should not be excluded, given that it has been working closely with the international community, sharing the common goals ofmany other countries to combat crime, the parliamentary group said.

Four other Italian parliamentarians -- Paolo Arrigoni, Massimo Candura, Emanuel Pellegrini and Manuel Vescovi -- on Oct. 10 called on their country's government to say whether it had any concrete plans to help Taiwan gain participation in Interpol.

The Republic of China (Taiwan) was an Interpol member country until 1984, when China gained admission and started pushing for Taiwan to be re-designated as "China, Taiwan." In the face of those circumstances, Taiwan decided to withdraw from Interpol.