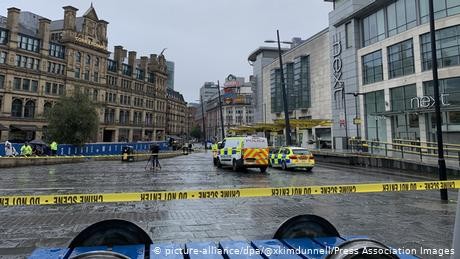 A man who is suspected of stabbing five people on Friday in a Manchester shopping center has been detained under the UK's Mental Health Act after being assessed by doctors, police say.He was initially arrested on suspicion of terror offences.

Police now believe that the suspect, who is in his 40s, acted alone and there is not thought to be any further risk to the public.

The force said the man had been assessed by "specialist doctors" after being compulsorily detained.

Investigations are continuing into fully understanding the motives behind the attack.

Police said the man entered the shopping center on Friday armed with a knife. Two unarmed officers confronted him, but he chased them, forcing them to call for urgent assistance. The man was "lunging and attacking people" with a large knife, according to a police statement.

Initially, the suspect was arrested for serious assault, and later Greater Manchester Police said that he was arrested on charge of instigating "an act of terrorism."

The Arndale shopping center in central Manchester, where the attack took place, was evacuated following the attack. Videos showed police using a Taser to detain a man lying on the ground.

One of the victims was reportedly wearing a "thick jacket" so remained unharmed.

According to eyewitnesses, emergency services were quick to arrive and deal with the situation. UK Prime Minister Boris Johnson also tweeted in praise of their response.