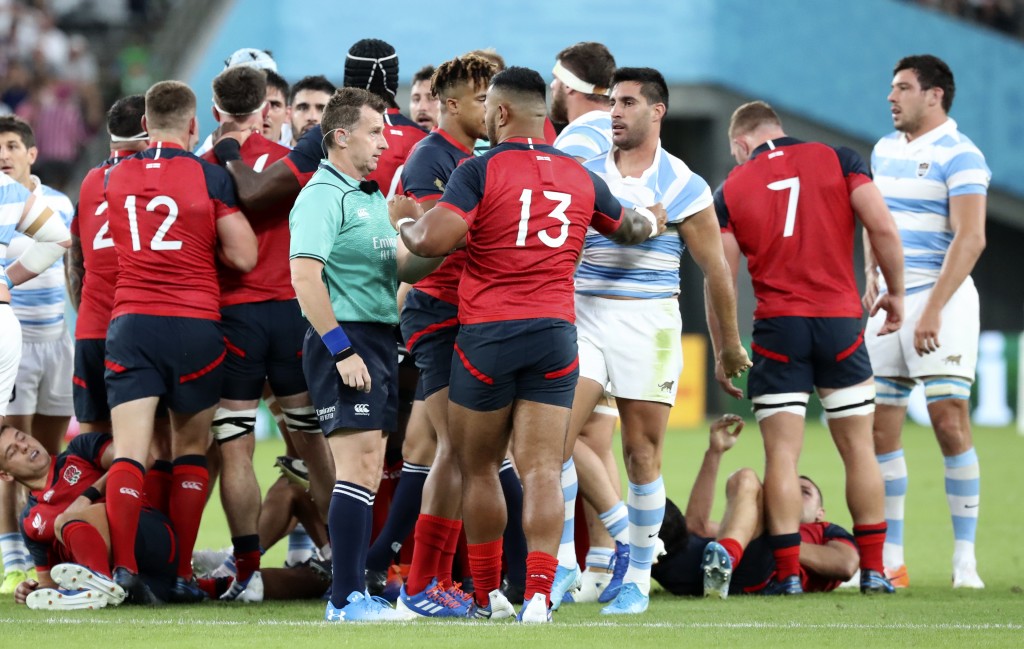 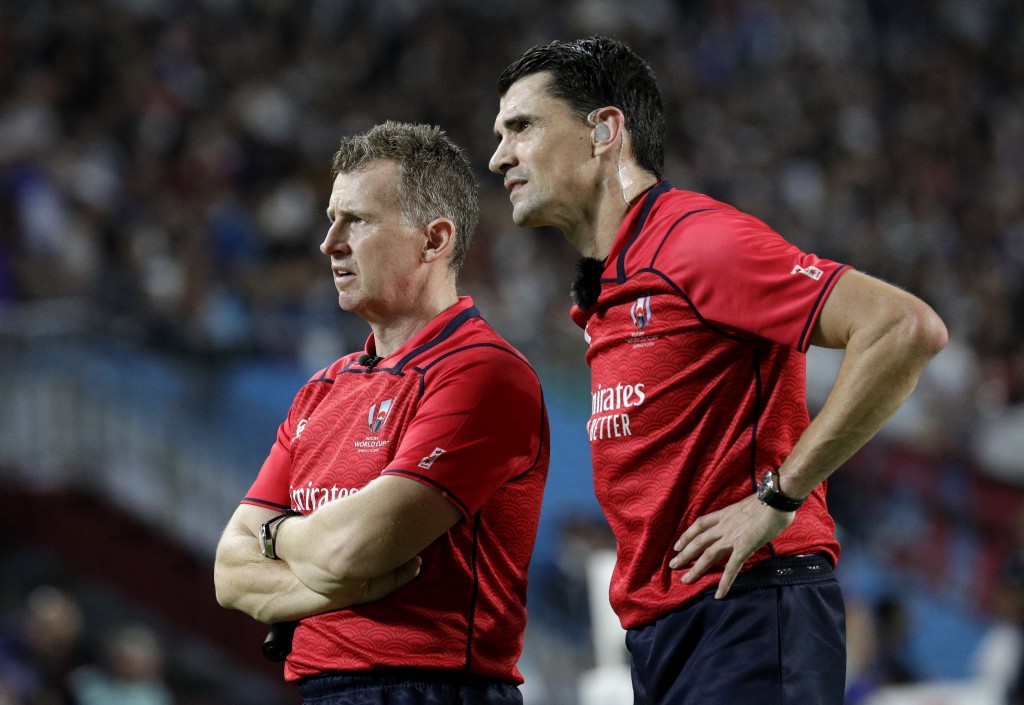 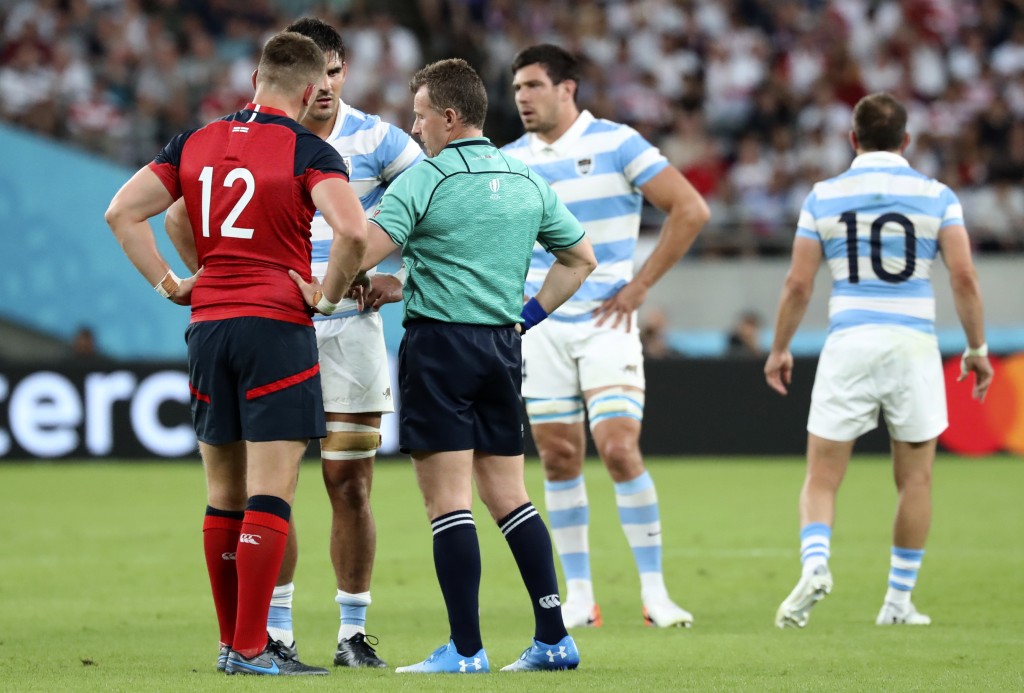 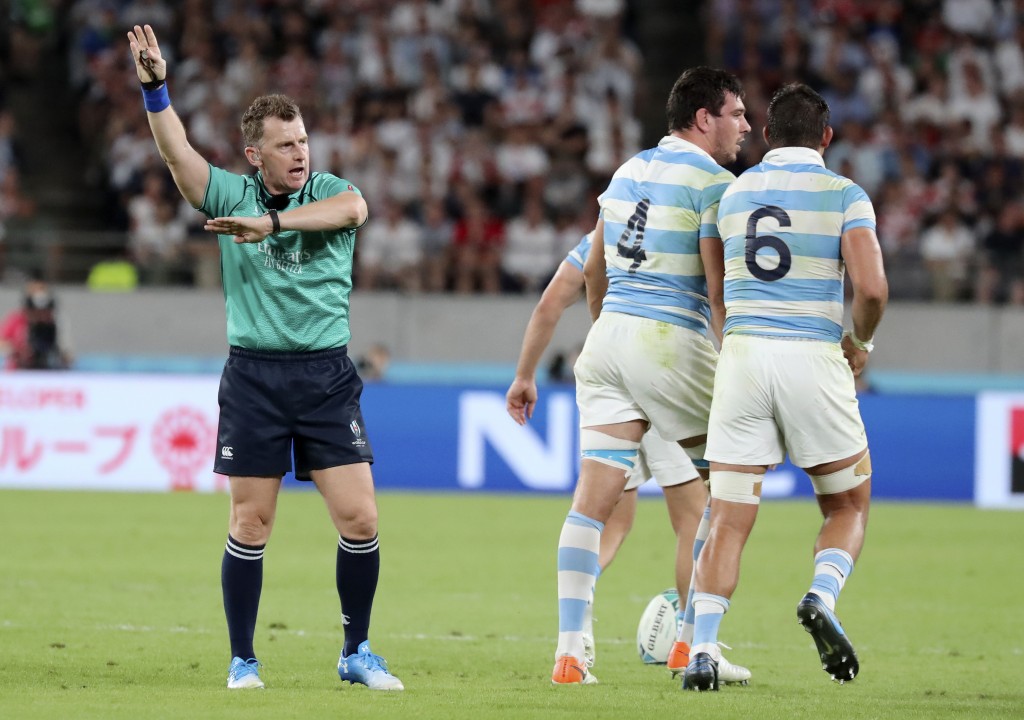 TOKYO (AP) — Rugby referees are best seen and not heard, it is said. Nigel Owens didn't get that memo.

At the Rugby World Cup in Japan, the Welsh referee seems to be second in visibility only to Michael Leitch, the captain of Japan whose face is everywhere thanks to his team's run through the pool stage and his posse of sponsors.

Owens' face pops up in the stadiums, on TV, and online courtesy of witty advertisements for the referees' airline sponsor. He highlights bad traveler etiquette on flights by whistling for obstruction, offside, and failing to roll away. There's even a riff on his most famed line, the time he told a Treviso scrumhalf to stop shouting at him: "This is not soccer."

Other lines of his have also passed into rugby legend.

"You don't have to call me sir, I'm from west Wales," Owens said in the Oxford-Cambridge Varsity Match.

"If you're going to cheat, you cheat fair," he told Barbarians scrumhalf Andy Ellis after a crooked scrum feed against New Zealand.

"If you don't like to scrummage you're in the wrong position," he told the front rows of Munster and Toulouse.

"I'm straighter than that one," he said after a Harlequins hooker's lineout throw-in was way off.

"Dive like that again and come back here in two weeks and play, not today," he warned Scotland fullback Stuart Hogg at Newcastle's soccer stadium, St James' Park, at the previous Rugby World Cup.

"I do not do one-liners to humiliate any players, and I certainly don't prepare any one-liners. I just go on the field to be myself," he says. "I referee what's in front of me, and I referee to the best of my ability."

That firm but empathetic control of matches has him on course to referee a second Rugby World Cup final in the last months of his international career.

Referees in Japan have drawn a distracting amount of the spotlight for policing high tackles, but Owens has avoided controversial moments while whistling three matches — with United States-Tonga to come on Sunday — and assisting in two others.

Owens had Japan-Russia on opening night, and drew jeers from the partisan crown after rubbing out a Kotaro Matsushima try because the Japan winger dropped the ball reaching for the line. Cheers came minutes later when Matsushima scored legitimately. There was a quiet apology to the losing Canadians from Owens when he had to rule out what they thought was their first try against Italy. There was nothing but certainty in sending off Tomas Lavanini with video help after initially missing the Argentina lock's dangerous high tackle in the game against England.

To retired ref Jonathan Kaplan, whose record of 70 tests Owens surpassed in 2016, the Welshman is the best referee of this generation.

"His communication skills and overall style set him apart from his peers and I enjoy watching him referee," says Kaplan, who, like Owens, also went to four Rugby World Cups.

Owens says the best part of refereeing is being part of the game.

Like players, refs want to be in the big games. Owens had the most recent of the biggest ones, the 2015 Rugby World Cup final at Twickenham. It's a favorite memory for him also because it was a great final, he didn't affect the outcome, and he was moved after the final whistle when Australia's David Pocock and New Zealand's Jerome Kaino thanked him before commiserating and celebrating with their respective teams.

His other favorite match was South Africa-New Zealand in 2013 at Ellis Park, a nine-try classic the All Blacks won despite two yellow cards. The pace was so relentless that Owens was crippled by cramps at the end.

Only South Africa's Andre Watson has refereed two Rugby World Cup finals, in 1999 and 2003, and Owens could join him, but only if Wales fail to reach the Nov. 2 final at Yokohama.

If Wales does make the final, Owens still has a great occasion to look forward to. He's been given special dispensation to officiate Wales for the first time when it meets the Barbarians in November in Cardiff.

The 48-year-old Owens is deeply proud of his Welshness.

He wrote for the Sports Chronicle last month that he grew up in a village of 140 people and didn't speak English until he was about eight. He was advised at school to try refereeing by his teacher after he missed a match-winning conversion attempt in front of the posts.

Owens came out as gay in 2007, and remains the only openly gay man in major rugby.

When he began to think at 19 he was gay, he was conflicted and worried about it being revealed. The stress made him bulimic and suicidal. Now he's become an outspoken advocate of mental health services, encouraging people who need help to talk to someone or seek expert advice.

Being seen and heard. Owens got that memo.