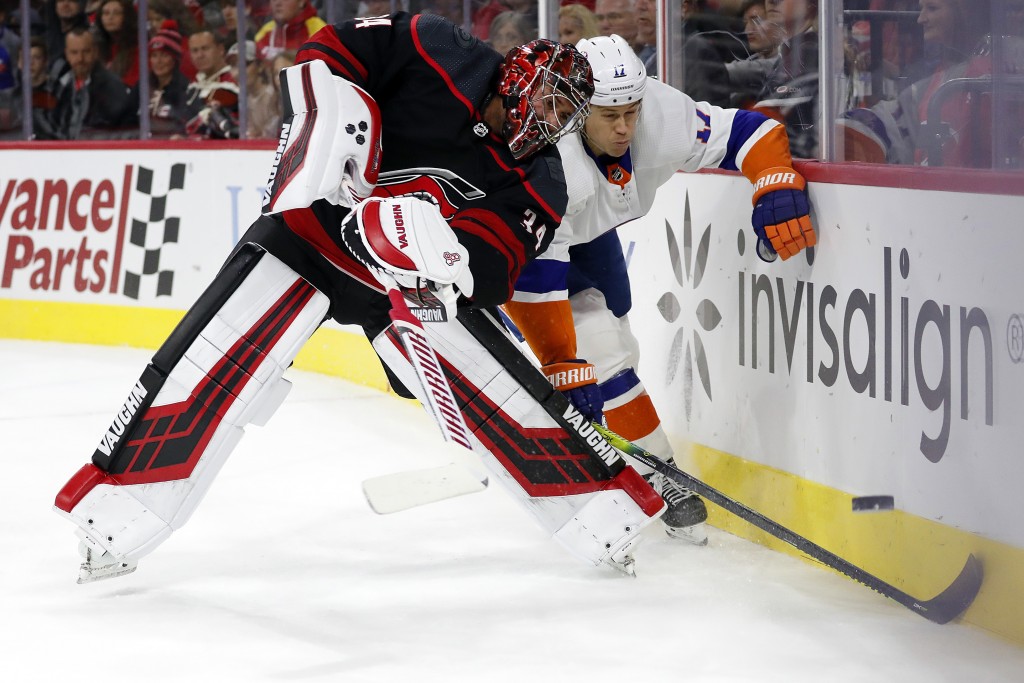 RALEIGH, N.C. (AP) — Dougie Hamilton and Andrei Svechnikov each had a goal and an assist as the Carolina Hurricanes beat the New York Islanders 5-2 Friday night and improved to 5-0-0 for the first time in franchise history.

Teuvo Teravainen, Brett Pesce and Eric Haula also scored, and Nino Neiderreiter added a pair of assists for the Hurricanes, whose previous best start was 4-0-0 in 1995-96. Peter Mrazek stopped 17 of 19 shots in goal.

Brock Nelson had a goal and an assist, Johnny Boychuk scored and Jordan Eberle added two assists for the Islanders, who fell to 1-3-0 on the season.

The Islanders last faced Carolina in the second round of the playoffs in May. The Hurricanes swept New York in the series.

COLUMBUS, Ohio (AP) — Ryan Miller had 26 saves in his first start of the season and Anaheim beat Columbus.

Jakob Silverberg and Cam Fowler scored for the Ducks, who have won four of their first five to start the season. The 39-year-old Miller was terrific after being slotted in for starter John Gibson on the second night of a back-to-back.

Pierre-Luc Dubois scored for Columbus, and Joonas Korpisalo had 22 saves.

BUFFALO, N.Y. (AP) — Casey Mittelstadt and Jack Eichel scored shootout goals and Buffalo matched its best start to a season in 10 years with a win over Florida.

Buffalo improved to 4-0-1 under new coach Ralph Krueger, and opened with three straight home wins for the first time since 2008-09.

Evgenii Dadonov scored on a partial breakaway 6:15 into the third period for Florida. Mike Hoffman forced overtime by scoring with 11 seconds left.