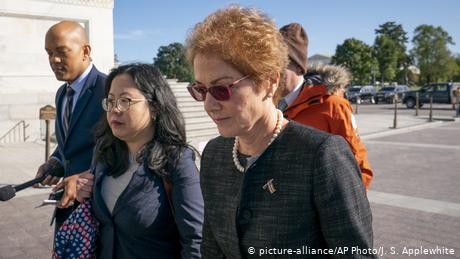 The former US ambassador to Ukraine has told Congress that President Donald Trump pressured the state department to remove her from her role.

Marie Yovanovitch, who was abruptly removed from her role in May, made the statement as part of her testimony in the ongoing impeachment inquiry against President Trump.

The diplomat, who is still employed by the state department, said she was told by an official that there was a "concerted campaign against me" over the course of a year while Trump pressured officials to remove her.

She said the decision to remove her was "based, as best as I can tell, on unfounded and false claims by people with clearly questionable motives."

Yovanovitch also testified that she never called on Ukrainian officials to refrain from investigating or prosecuting corruption.

Read more:Opinion: Trump has no plan — and is panicked and paranoid

Democrats are questioning Yovanovitch as part of their impeachment investigation into Trump, as they decide on the legality of allegations he pressured Ukraine to investigate former Vice-President Joe Biden, a lead contender in the Democratic race for the presidency.

According to transcripts of a July 25 phone call with Ukrainian President Volodymyr Zelenskiy, Trump described Yovanovitch as "bad news."

Yovanovitch is a career diplomat and former US ambassador to Armenia and Kyrgizstan, as well as Ukraine until her tenure was cut short.

Trump has called the inquiry unfair and "illegitimate."