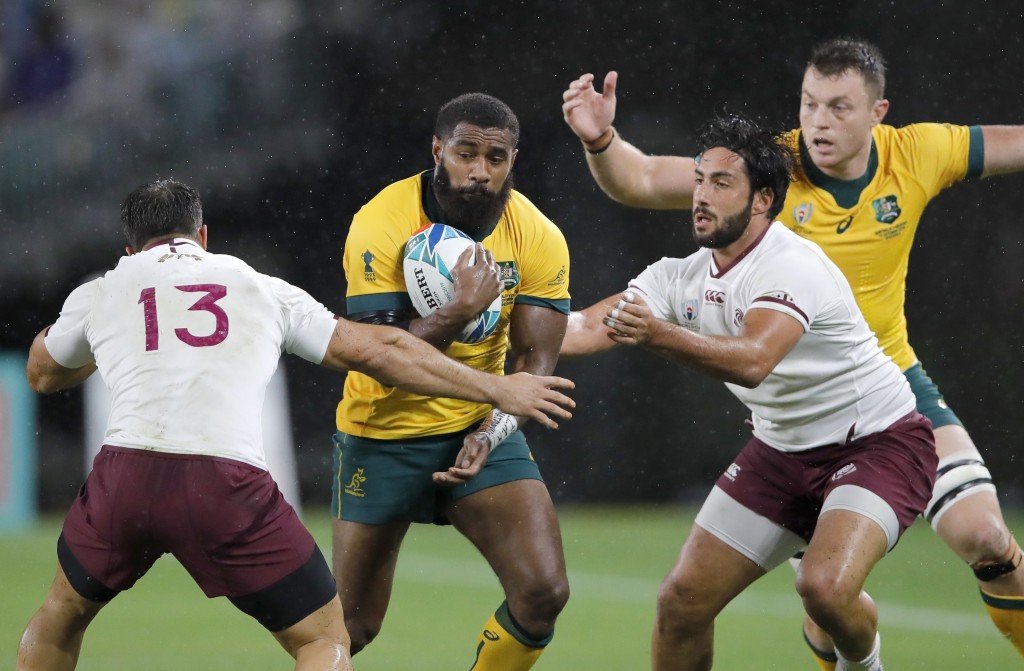 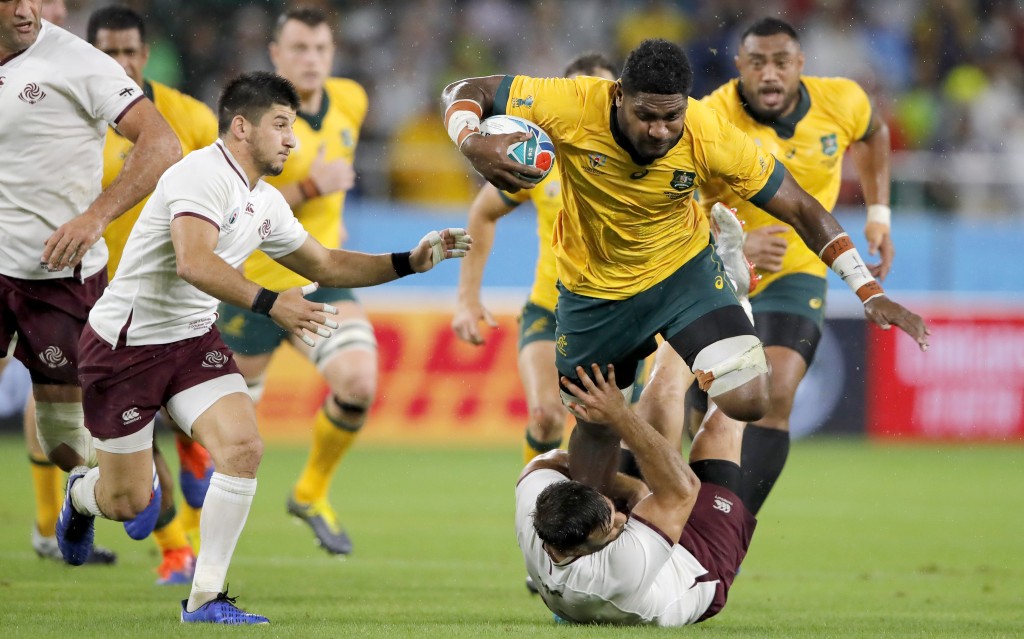 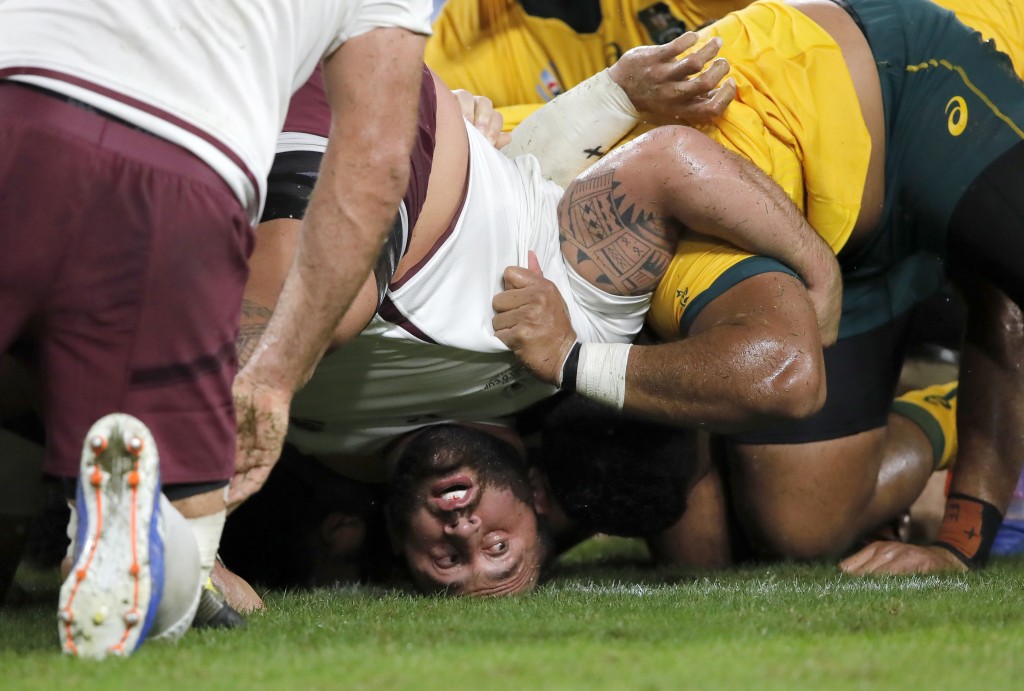 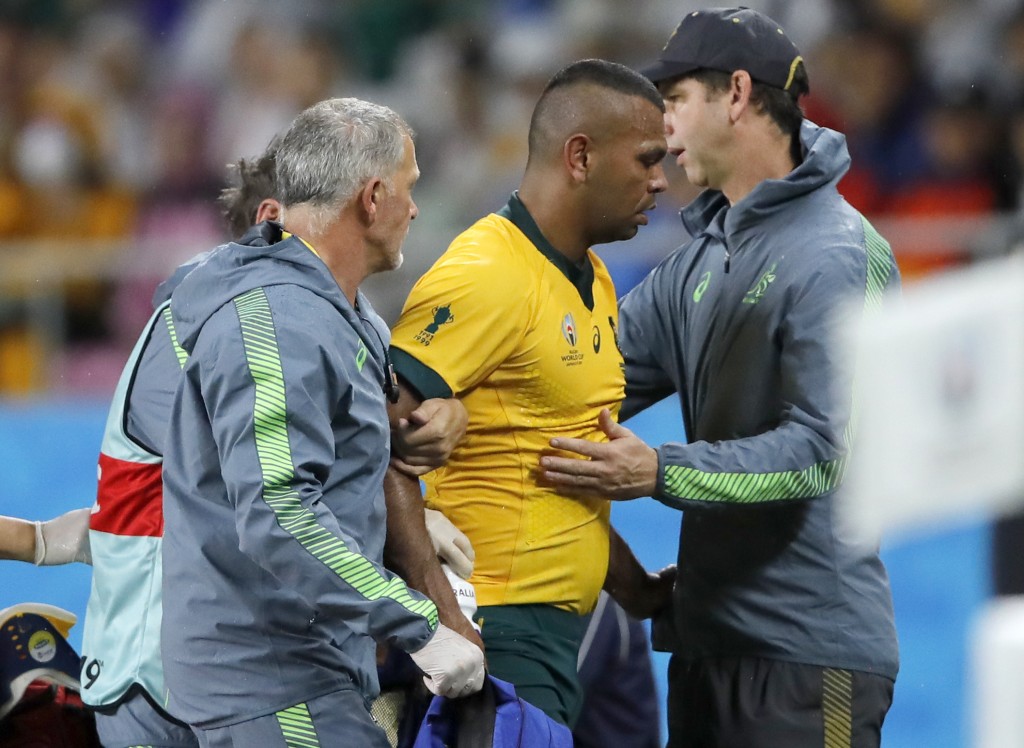 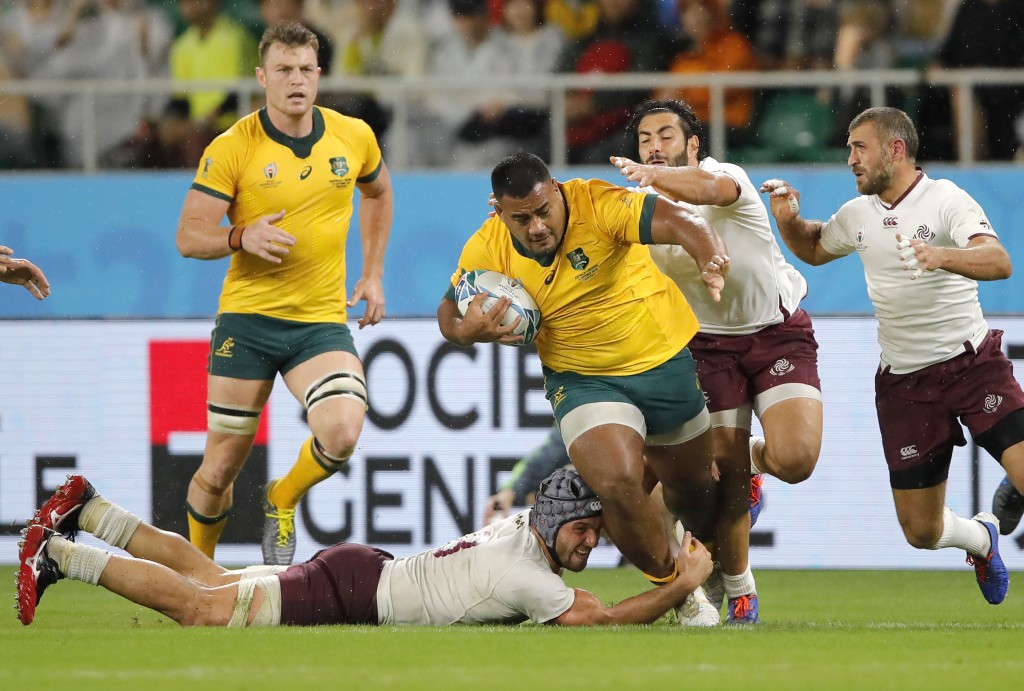 SHIZUOKA, Japan (AP) — A solo try from winger Marika Koroibete on the hour and two late tries earned a mistake-prone Australia a flattering 27-8 bonus-point win over a Georgia lineup that tackled itself to a standstill in wet and windy conditions at Shizuoka on Friday night.

Australia had almost 80% of possession and 85% of the territory in the first half and led only 10-3 at the break, with scrumhalf Nic White burrowing over for the only try in the 22nd minute and flyhalf Matt Toomua landing the conversion and a penalty goal.

The Australians were already qualified for the quarterfinals but still needing a hit-out to prepare for a likely quarterfinal against England. The Georgians provided a genuine contest, making 128 tackles in the first half to put up a defensive wall as the Wallabies struggled to translate an attacking game plan for the slippery conditions.

Georgia finished with 201 tackles against a Wallabies lineup that dominated the ball but failed to capitalize.

"I thought we defended with big hearts today," Georgia coach Milton Haig said. "We did the country proud."

It wasn't until a Koroibete moment of individual brilliance that Australia put real distance between itself and Georgia on the scoreboard.

Poor passes went to ground in three consecutive movements by the Australian backline, before Koroibete swooped on a loose ball, picked it up running toward the wrong end, before turning and straightening up, stepping inside and outside two defenders, and then cutting back inside the cover defense to score in the 60th.

Toomua converted to make 17-3 but it was the Georgians who scored next, against the run of play. After a wild tap for a Georgian lineout win, flyhalf Lasha Khmaladze stepped through a big gap in the midfield and fed left wing Alexander Todua to sprint into the corner.

It cut the margin to 17-8 but the fatiguing Georgians struggled to keep matching the Australians late.

Back-rower Jack Dempsey barged over from a driving maul following a close-range lineout in the 75th, and replacement scrumhalf Will Genia finished off an enterprising attacking raid just before fulltime to secure the bonus point.

Australia is on top of Pool D, but Six Nations champion Wales finishes off the pool against Uruguay on Sunday and is expected to remain unbeaten and clinch the pool to move into a quarterfinal against France.

Japan is bracing to be hit by Typhoon Hagibis on the weekend and two scheduled games on Saturday have already been canceled, giving defending champion New Zealand a weekend off instead of playing Italy, and allowing England to top Pool C without having to play second-placed France, which was also unbeaten in the group stage.