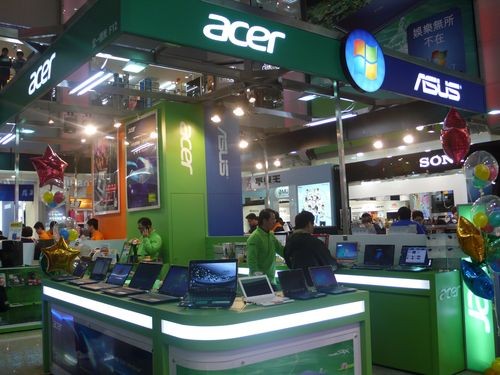 Acer Inc. and Asustek Computer Inc. retained their titles as the fifth- and sixth-largest global PC suppliers, respectively, in the third quarter of this year, according to global market information advisory firm Gartner Inc.

While PC shipments for the July-September period rose about 1 percent from a year earlier, Asustek still saw its shipments falling on a year-on-year basis, a research report dated Oct. 10 from Gartner showed.

However, Acer outperformed the global market in the third quarter, when the Taiwanese brand shipped 4.21 million PCs, down 4.4 percent from a year earlier, to take a 6.2 percent share, which was up from 6.0 percent seen a year earlier and also up from 5.4 percent in the second quarter, Gartner said.

PC shipments by Asustek dropped 4.4 percent from a year earlier to 3.82 million units, with a global market share of 5.6 percent worldwide in the third quarter.

During the July-September period, global PC shipments totaled 68.12 million units, up 1.1 percent from a year earlier, after a 1.5 percent increase in the second quarter.

"The Windows 10 refresh cycle continued to be the primary driver for growth across all regions, although the magnitude of the impact varied according to local market conditions and the stage of the refresh cycle," Mikako Kitagawa, senior principal research analyst at Gartner, said in a statement.

Kitagawa cited the Japanese market as an example, saying that shipments in that market grew 55 percent in the third quarter from a year earlier, driven by the Windows 10 refresh cycle and a pending sales tax change. The strong growth gave a boost to the total worldwide PC market.

The analyst said that neither a CPU shortage nor the trade dispute between the United States and China had an adverse impact on PC shipments worldwide. "The Intel CPU shortage has continued to ease, and U.S. tariffs on China-built mobile PCs had a minimal impact on PC shipments, as the date for the potential increase in tariffs was pushed out to December 2019," Kitagawa said.

The analyst said the Intel CPU shortage actually provided opportunities for rival CPU vendors such as Advanced Micro Devices Inc. and Qualcomm Inc. to reposition their processors in the PC market, which has been dominated by Intel.

Kitagawa added that by teaming up with Microsoft Corp., Qualcomm has promoted the "always connected PC," which is equipped with Long-term Evolution capability.

Shipments by China's Lenovo Group Ltd. for the third quarter rose 5.8 percent from a year earlier to 16.81 million units, as the Chinese brand enjoyed a significant increase in Japan, Latin America and the broader Europe, Middle East and Africa region.

Lenovo took a 24.7 percent global market share, as the largest PC supplier in the third quarter, up from 23.6 percent over the same period of last year, but down 25 percent in the second quarter of this year, Gartner added.

U.S.-based HP Inc. came in second in the quarter after shipping 15.26 million PCs, up 4.6 percent from a year earlier, to account for 22.4 percent of global shipments, the data showed.

Dell Inc. of the U.S. took third place, with shipments of 11.32 million PCs in the second quarter, up 5.5 percent from a year earlier and accounting for 16.6 percent of global shipments, Gartner said.

Apple Inc. took the No. 4 spot, shipping 5.10 million units, down 3.7 percent from a year earlier, to take a 7.9 percent share, underperforming the global market, the data showed. (By Frances Huang)