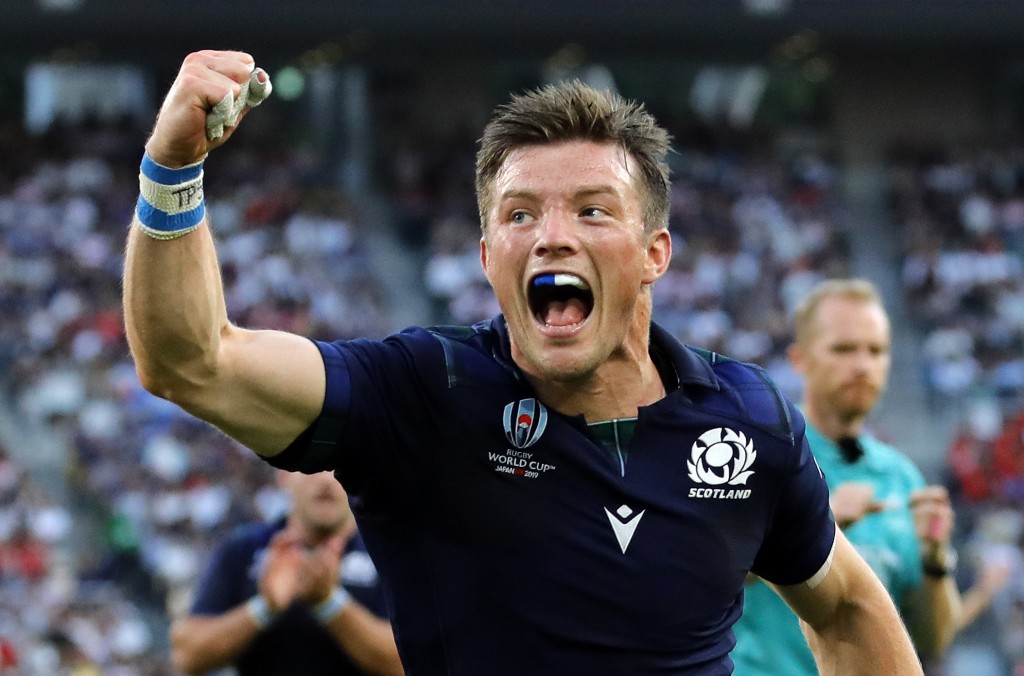 TOKYO (AP) — A super typhoon could set the scene for a fierce storm of a different kind if Scotland doesn't get the chance to play host nation Japan for a spot in the Rugby World Cup quarterfinals.

Scottish rugby officials have forecast legal action if Sunday's game in Yokohama is cancelled, vowing not to be collateral damage of a potentially destructive typhoon expected to lash central Japan this weekend.

The Scots have argued World Rugby acted too hastily in canceling two games scheduled for Saturday, and could have found alternatives to ensure all games were completed.

The spin has been that Japan will benefit of the last of the pool games is canceled. And that has upset head coach Jamie Joseph, who thinks anyone saying that is missing one thing.

His team has beaten Ireland, Russia and Samoa and tops the group and deserves a spot in the World Cup quarterfinals for the first time. And just to prove it, he wants the Pool A game to go ahead just as much as his Scottish counterparts, who will definitely miss the knockout stage if it's canceled.

Only two words will satisfy both teams when organizers make a final call on Sunday morning: game on.

"We feel we've played and won three test matches and that's put us in the best position to win this pool," Joseph said Friday. "Just in the past few days through the media reports I've read, I feel they've undermined the achievements of the Japanese national team and the significance of Sunday's test for Japan.

"We've all earned the right to be considered one of the elite teams in the world. It's important for us to wake up on Monday morning and understand we're a worthy top eight team or we're not."

If Ireland beats Samoa on Saturday — that was the only game not cancelled on that day — Scotland needs to win with a bonus point to edge Japan from a top-two finish in the group. The Scots lost 27-3 in their opening game to Ireland, who then were upset by Japan.

"The key difference here between us and Scotland is that we're driven and supported by the whole country," Joseph said. "My team is motivated by achieving something great, not avoiding embarrassment.

"I'd like to remind everybody it hasn't been a fluke — this team has been in camp for 240 days this year alone."

Scotland coach Gregor Townsend said he's expecting the weather to be better on Sunday, anyway, and is confident the game will go ahead.

"I know the situation changes a lot but what we have been told is that Sunday looks clear now. Saturday is the day when the typhoon comes in, and it comes through quite quickly."

Japan has never beaten Scotland, and it was a loss to the Scots that put them out of the 2015 World Cup in the group stage despite registering three wins — including the massive upset win over two-time champion South Africa.

Japan frontrower Shota Horie thinks the schedule won't be further harmed by the typhoon that it already is, although he's not so confident about his property.

"It's a typhoon of quite a size so I want all the Japanese citizens to be careful," he said. "I think the match will go ahead, of course we'll win and progress to the last eight.

"I'm not thinking about anything else, (although) I'm worried whether my house will be all right."

Both lineups have been announced, so the pre-game formalities haven't been delayed.

Joseph has given star winger Kenki Fukuoka a start after he has proved he's recovered from a calf muscle injury sustained five weeks ago.

Fukuoka was a late, forced inclusion in the reserves against Ireland and scored the match-winning try, and scored another try off the bench against Samoa last Saturday. He's back as a starter among four changes to the starting lineup.

Fukuoka, Horie, and Thompson, along with prop Keita Inagaki, captain Michael Leitch, flyhalf Yu Tamura and wing Kotaro Matsushima repeat as starters against Scotland from the 2015 Rugby World Cup match which the Scots won 45-10 to cost Japan a place in the quarterfinals.

Townsend made 12 changes to his starting lineup, recalling seven players to the starting XV who were rested for the midweek win over Russia.