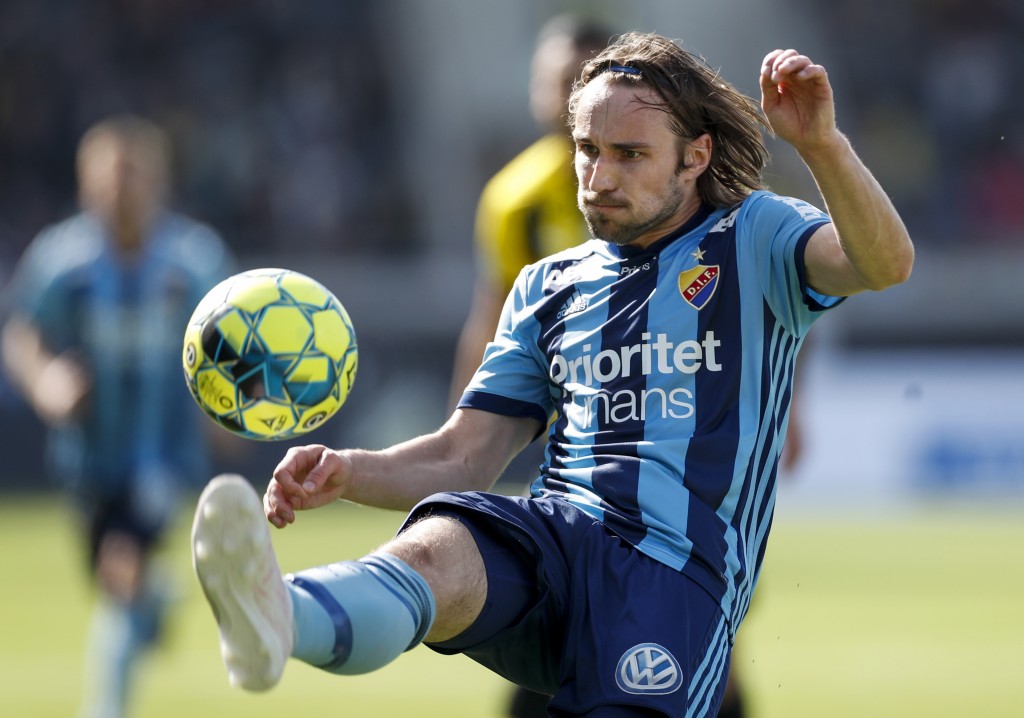 He has worked with some of the country's top songwriters, written and performed his own singles which have been played millions of times on Spotify, and would be a good bet to represent Sweden in the Eurovision Song Contest sometime in the not-so-distant future.

He dreams of one day singing at Madison Square Garden in New York, or Wembley Stadium in London.

Walker isn't forgetting about his day job, though.

When he's not in a studio or making music videos, the 30-year-old Walker is a soccer player with Djurgården, which is in contention to win the Swedish league title for the first time in 14 years.

A professional since 2006, he has played for Sweden's national youth teams and won domestic cup competitions. But this would be his first league title, the crowning achievement of his soccer career.

And, heading into the final pressure-filled three weeks of the season, Walker is using his experience in "Idol" — the singing competition that thrust him into the national consciousness six years ago — as something of a lesson.

"I went out of my comfort zone, did something in front of millions of people that I wasn't trained to do," the central midfielder told The Associated Press in an interview on a chilly afternoon before Djurgården's practice session in central Stockholm.

"I got through that, and really learned about how I work under immense pressure and when I get nervous. It was developing for me as a person, and I'll carry that with me for the rest of my life."

Somewhat accidentally, Walker became one of the most famous soccer players in Sweden despite never having played for the national team at senior level.

In 2013, he was playing for Sundsvall in Sweden's second division. A teammate was due to perform at an open mic night at the city's casino but couldn't find a babysitter, so he asked Walker if he wanted to stand in.

He had always liked a "sing-song" from when he was a small child and he used to go to Ireland — the birthplace of his father, Pat, a former soccer player and coach — to visit family. So Walker took the plunge.

Someone filmed him singing four songs alongside a piano player, and the video was shown to a producer of "Idol" when the show was in town looking for contestants. Walker ended up applying, passing the auditions, and winning the whole thing — earning a contract with Universal Music in the process.

"I was standing there singing with Robbie Williams in The Globe," Walker said, referring to his duet with the world-famous pop singer in the arena in Stockholm that staged "Idol." ''It was pretty surreal."

During "Idol," he became front-page news. Commercial flights from Sundsvall to Stockholm were held back to allow Walker to get to the airport after soccer practice and fly down to the capital to perform live on stage. Swedish TV rearranged the time of a Sundsvall game to accommodate Walker's appearance on the show.

His debut album — "Belong" — went platinum. His popularity was soaring. So it gave Walker a dilemma: Stick with soccer or become a full-time musician?

Still in his mid-20s, he chose soccer.

"They have a saying in Sweden, 'While the iron is hot,' — but I felt differently," Walker said. "I thought, 'This is great, now I have a platform which, if I play my cards right, I can develop and have a product after football.'"

So he has intermittently released singles off his own back, having ended his contract with Universal to allow him to write his own songs and dictate the pace of his music career.

"The Wind" was released in 2016 without a record label and has been his most popular song on Spotify, with more than 2.5 million plays. His latest single — "Maybe I" — was released in August and Walker said it had 120,000 streams in a month and a half. He plans to release an EP soon.

He has worked with producer Per Gessle, the male half of pop duo Roxette, and collaborated with Jörgen Elofsson, who has co-written songs for the likes of Kelly Clarkson and Britney Spears.

But Walker, now a father of two, doesn't see himself as having a "rock-star lifestyle." He simply wants to stay relevant in music until his days as a soccer player are over, when he can really go hard at his new career.

That's something he still sees as being a few years off.

"When I start thinking that my next football contract should be pegged up for my music, then maybe I shouldn't be signing that contract," said Walker, who has one year left on his deal with Djurgården.

"I'm in a good place now. Probably in my prime, football-wise, for the next two, three years. So I think football will dictate the next contract. But I'd have to think of the bigger picture as well."

Walker started playing for Djurgården in 2015, was soon made captain, and helped the team win the Swedish Cup last year. He has had to battle for his place in the team this season but is still a key member of a squad that is tied on points with Malmo with three matches remaining.

"For my personal record, this is 14 or 15 years in the works," said Walker, whose Irish heritage comes out when he talks. "There's a lot that has been leading up to this point."

Walker was at AIK, another Stockholm-based soccer team, when it won the league in 2009 but he didn't get a winner's medal because he missed the whole season with a blood-poisoning illness.

It was during that year he bought a guitar and keyboard, and started writing songs at home to kill some time.

A decade later, Walker — a musician, rather improbably, in his own right — could finally become a soccer champion, too.