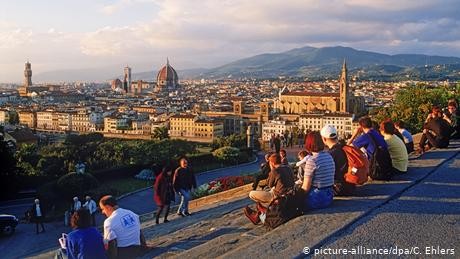 More than any other Italian city, Florence is associated with the creative spirits who established the Renaissance. The most important poet of the late Middle Ages, Dante Alighieri, was a Florentine. Thriller author Dan Brown recently brought him into the 21st century in his novel "Inferno". In the 14th century, under the ruling Medici family, the quintessential Renaissance man, Leonardo da Vinci, the architect Filippo Brunelleschi and the sculptor and painter Michelangelo rose to be the most important artists of their time. They made Florence the cradle of the Renaissance, and, in doing so, a center of the arts in Europe to this day.

More than any other Italian city, Florence is associated with the creative spirits who established the Renaissance. The most important poet of the late Middle Ages, Dante Alighieri, was a Florentine. Thriller author Dan Brown recently brought him into the 21st century in his novel “Inferno”. In the 14th century, under the ruling Medici family, the quintessential Renaissance man, Leonardo da Vinci, the architect Filippo Brunelleschi and the sculptor and painter Michelangelo rose to be the most important artists of their time. They made Florence the cradle of the Renaissance, and, in doing so, a center of the arts in Europe to this day.

Among the must-sees in the city is the Uffizi Gallery, one of world's most important museums. The abundance of masterpieces it contains by Leonardo da Vinci, Rafael and Botticelli still evokes astonishment and admiration.

The Galleria dell'Accademia is also on many tourists' to-do lists. This is where the original statue of David, the biblical hero who slew Goliath, stands, more than five meters tall. Michelangelo sculpted it out of a single block of marble.

Handicrafts also have great significance in Florence. In the 12th century, the city's wealth was based on working in wool and silk. Now hand-made shoes, leather goods and jewelry are sought-after Florentine specialties.

The largest city in Tuscany has just under 400,000 residents, more than 70 museums and countless noteworthy palazzi. What can and should you see in 48 hours here? DW presenter Meggin Leigh found out. She checked out the most exciting cities in Europe and presents them in the series “Meggin's perfect weekend” on the DW-TV lifestyle show, Euromaxx.

These are Meggin Leigh's personal tips for Florence:

Get to know the fine art of leather craftsmanship in a former monastery in Santa Croce, Scuola del Cuoio, Via S. Giuseppe, 5r

In 1951, Florence invented Italian haute couture before Milan took over the role of leader in the 1970s. To this day, expensive made-to-measure fashion is firmly established in Florence. All the major fashion houses, among them Bulgari, Prada and Armani, can be found around the shopping street Via de’ Tornabuoni. From here to the Via Roma and Via Calimala there is a wealth of luxury brands of shoes and fashion.

But forays into quarters such as Santo Spirito, Santa Croce and San Frediano are well worth it as well. Hip fashion boutiques spring up next to trendy pubs; tucked between them is a re-invigorated silk mill from the 18th century, the Antico Setificio Fiorentino, which weaves and sells fabrics in historical patterns, made on pre-industrial looms. You can also find studios of wood gilders and copperplate engravers in these districts.

If you want to take home a special souvenir made of wood, go back over the Ponte Vecchio into the old town and buy a Pinocchio head from Bartolucci. The traditional artisans' and jewelers' area has always been around the Ponte Vecchio. In the 14th century, butchers and tanners who threw their waste into the river were resident on this oldest bridge in Florence. That changed with a decree by the Medici in 1565, which settled goldsmiths in the shops on the bridge. The rings and necklaces of the Medici women now in catch people's eyes hand-made costume jewelry.

Italy's only state fashion museum is in Florence – more precisely, in a wing of the Palazzo Pitti, the former official residence of the dukes of Tuscany. The "Galleria del Costume" shows such treasures as an evening gown inspired by the lavish garments in the Renaissance painting "La Primavera" (Spring) by Sandro Botticelli. With this design, Florentine seamstress Rosa Genoni not only stole the show from the leading Parisian couturiers at the World Exposition of 1906; she also used her celebrity to campaign for better conditions for seamstresses in Florence.

If you want to, you can take a side trip to the city's private fashion museums: to Gucci or Ferragamo, who began running his business in Florence in 1927. One reason he became one of the world's most famous shoe designers is because Hollywood film divas from Ingrid Bergman to Marilyn Monroe had their shoes made to order in his Florentine fashion paradise.

Unfortunately Florence is now also a paradise for counterfeiters of bags, shirts and sunglasses. So tourists should be wary of knock-down prices from street hawkers and market vendors. Since 2014 the sale of counterfeits has been punishable by law.

The long-established Florentine cafes include not only the Caffè Scudieri on the cathedral square but also the Caffè Gilli. Since 1733, Florentines have been sipping cappuccino for breakfast, with the popular dolci, sweet pastries.

One kind of dolce has made it from Florence to the whole world: the biscuits with almonds called cantuccini. They're also called "biscotti di Prato," for Prato, near Florence, where a confectioner, Antonio Mattei, is said to have baked them for the first time.

Italian ice is high on the list of Florence's sweet pleasures. You can eat it any time: before lunch, after it, before supper and after. There are innumerable ice cream shops in the city. One way to recognize artisanal ice cream is that it's not displayed in whipped-up mounds that are piled high.

In addition to ice cream, the city's hearty specialties shouldn't be missed, whether served in a trattoria or sizzled during a hip cookery course with a local. The ingredients for tagliatelle with hare ragu or veal tripe in tomato sauce, trippa alla fiorentina, can be found fresh at the Mercato Sant'Ambrogio. The city's second-largest market, the Mercato Centrale, is worth visiting not only for its selection of olives, pasta, vegetables, meat and wine, but also because of its cast-iron 19th century building.

If you'd rather be served in a trattoria or osteria, try local specialties with a glass of Tuscan Chianti: Florentine steak (bistecca alla fiorentina), white beans with sage, fagioli, or ribollita, the typical thick Florentine vegetable soup with white kidney beans.