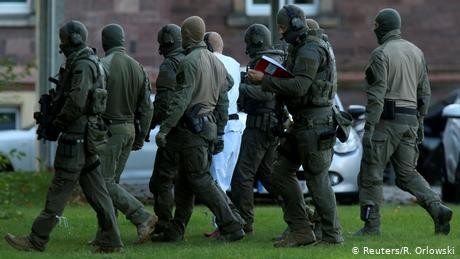 The 27-year-old suspect has confessed to the attack at the synagogue in Halle ​​​​​​that left two dead, Germany's Federal Prosecutor's Office said on Friday.

During a lengthy meeting with German investigators on Thursday, Stephan B. spoke "very extensively" and admitted that anti-Semitic and right-wing extremist beliefs motivated him to commit the attack, a spokesperson for the Federal Prosecutor's Office said.

"He gave an extensive confession. He confirmed far-right and anti-Semitic motives" for the attack, the spokesman said.

The suspect made the confession to the judge at Germany's Federal Court of Justice on Thursday evening.

The arrest warrant, issued on Thursday, was for two counts of murder and seven counts of attempted murder.

Read more: How can Germany better protect its synagogues?

Stephan B. is currently in custody awaiting trial and the German authorities are treating the incident as a far-right terrorist attack.

German Defence Minister Annegret Kramp-Karrenbauer in comments published in the Tagesspiegel newspaper on Friday said, "Our country and its basic order is being attacked from within." She also called for stronger security laws.

Germany's upper house of parliament, the Bundesrat, on Friday held a minute of silence for the victims of the attack.