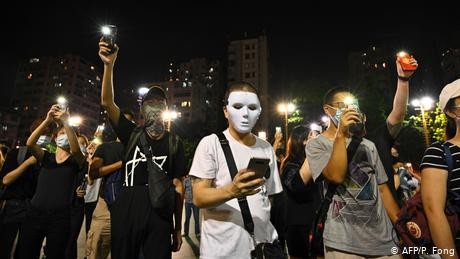 Hong Kong's Chief Executive Carrie Lam said in a press conference earlier this week that Hong Kong had not experienced so much destruction since World War II. She did not admit to having played a part in the escalation. There has not really been genuine dialogue between the government and the protesters, apart from the "community dialogue” that took place at the end of September with some randomly chosen citizens. This cannot be compared with French President Emmanuel Macron's attempts at reconciliation in the midst of mass protests by the gilets jaunes, or yellow-vest protesters.

The situation will only calm if there is a real, intensive dialogue. The anti-mask law — which came into force practically overnight as Carrie Lam invoked colonial-era emergency laws dating back almost 100 years — have only poured fuel onto the fire. It was obvious that this would happen and perhaps it was therefore intentional so that she could clamp down more harshly.

The impact is visible everywhere in Hong Kong, which is partly paralyzed. The barricades and Chinese businesses have gone up in flames. Large parts of the subway system have been closed temporarily. Some train services to the mainland have been suspended after the windows of a train were smashed.

The media, whether in China or the West, have concentrated on the violence and thus helped to contribute to its escalation. The Chinese media have labeled the protesters as terrorists, accusing them of separatism, even if this is not one of the five demands put forward by the majority of protesters. The Western media have covered the demonstrations as if it were an action film featuring guerrilla fighters. They portray Hong Kong as the last bastion of those who refuse to yield — as if it were an Asterix book.

But apart from some radicals who are in the limelight, most of the demonstrators are amiable and peaceful young people. Their fear of Beijing's grip is legitimate. This is their generation's moment of reckoning.

In a city with major class differences where many struggle to keep their head above water, it is the first time they have experienced something akin to solidarity. They have been meeting in malls, singing protest songs together and helping each other to wash the tear gas out of their eyes. They believe that they are doing this for their neighbors and humanity generally. One of their favorite slogans is "Liberate Hong Kong, the revolution of our times."

The protesters have romanticized their movement in real time. The more pressure there is from above, the more they feel united by their fate. The less the government seems willing to make compromises, the more violent those on the frontline become. This is a vicious circle that the anti-mask ban has accelerated.

The causes go back to Hong Kong's history. The city was built up after businesses fled Mao in the 1950s, fearing that their assets and capital would be seized and that they would land up in jail — or dead. When the crown colony reverted to Chinese sovereignty in 1957, many Hong Kong citizens worried that they would be forced to adapt to a mentality and identity that was Chinese but not quite the same. Their children and grandchildren are much more political. Every year, they flood to Victoria Park and light candles to commemorate the victims of the Tiananmen Square massacre in Victoria Park. This would be unthinkable on the mainland so it makes sense that many of the young demonstrators think that they are martyrs, on the right side of history.

Many of the young Hong Kong protesters consider themselves to be the real Chinese patriots and hope that with their efforts, the whole of China will eventually be blessed with more civil freedoms and the rule of law. But generally, this is not how they are understood by fellow citizens on the mainland, who tend to be more pragmatic and flexible — and do not understand their idealism. They are proud of what they have achieved despite all the adversities. They, too, are critical of Beijing but they would not go out on the streets to protest. Some think that the protesters in Hong Kong want too much at once and accuse them of being ungrateful and unreasonable, saying that they are shooting themselves in the foot.

What's certain is that Hong Kong will only be able to defend its position if it is unique in comparison to other Chinese cities and just as strong. The dilemma is that defending Hong Kong's strengths is also causing it to be economically weaker and thus more vulnerable to external pressures.

Tourism has caved in, businesses are closing down, people are losing their jobs. Economic forecasts for the third quarter are negative. But many demonstrators do not care about this. For the first time — after years of impotence and social inequality imposed by the government and the elites — they think that their fate is in their hands. No anti-mask law can help. The mask has now become the symbol of resistance.

It would make sense if everyone allowed the situation to cool down a little, for both Carrie Lam and the protesters to sit down at the same table and seek a compromise. But, at the moment, it is not clear whether either side wants to do this.