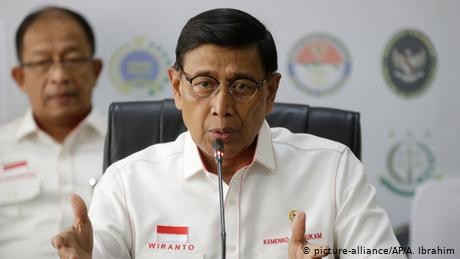 Wiranto was stabbed as he was getting out of a car at an event in Pandeglang, a city on Java island west of the Indonesia's capital, Jakarta. Images of the attack showed officers wrestling a man and a woman to the ground after they rushed the minister. Police suspect the two are a married couple.

"When the car stopped, there were people circling around, protecting him," a witness told AFP news agency.

"But a man got into the circle and stabbed Wiranto. The woman also tried to stab him."

According to police, Wiratno, who goes by one name, was in stable condition and conscious after the attack. The minister was airlifted to a hospital in Jakarta where he underwent surgery for two wounds to his abdomen.

Read more: How Indonesian women are lured to jihad

Authorities say the group has a large following in Bantan province where the attacks took place.

Dozens of radical groups in Indonesia have pledged loyalty to IS, as the world's largest Muslim-majority country deals with a surge of militancy.

Hundreds have been detained Since new anti-terrorism laws were introduced in 2019.

Read more: Why is radicalism growing among Indonesian students?

The motive for Wednesday's attack is not immediately clear. Wiranto is a former general who currently coordinates and supervises Indonesia's national police and defense agencies, which have run the government's counterinsurgency campaign.

Indonesian President Joko Widodo spoke to the media in front of the hospital where Wiranto is being treated and called the suspect a "terrorist."

"I ask for everyone's help in fighting radicalism and terrorism because we can only do it together," he said.