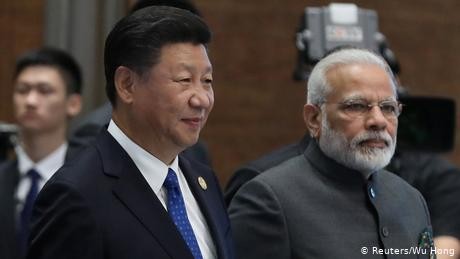 Chinese President Xi jinping is visiting India on October 11-12 for an "informal summit" with Indian Prime Minister Narendra Modi in the southern coastal city of Chennai.

The meeting will provide an opportunity for the two leaders "to exchange views on deepening" the bilateral partnership, read a statement by India's Foreign Ministry. Modi and Xi will also visit the nearby temple town of Mamallapuram.

Both leaders last met one-on-one at a resort in Wuhan, China, in April 2018.

Xi's trip comes at a time when relations between New Delhi and Beijing have been shaken by India's drastic moves to rescind the special constitutional status of India-administered Kashmir — known as Jammu and Kashmir.

Kashmir has been a pending territorial dispute since both India and Pakistan became independent countries in 1947. Today, both these countries and China control parts of it.

India now has de facto control over about 45% of the region and the majority of its population, while Pakistan controls around 35%. The remaining 20% is under the control of China.

Pakistan's Prime Minister Imran Khan earlier this week traveled to China and met with Xi and other high-ranking Chinese officials to discuss, among other things, the Kashmir situation.

"China sympathizes and supports the situation faced by Pakistan on this issue. So, at present, the relationship between China and India has reached a very delicate point," Cheng Xiaohe at the Department of International Politics at Renmin University, told AFP news agency.

And Xi said on Wednesday that he was watching the situation in Kashmir and would support Pakistan in issues related to its core interests, the official Xinhua News Agency reported.

"China will do what it has done for years and decades. Beijing will support Pakistan in various international forums, and it will continue economic and some military assistance to Pakistan, and it will berate India's decision in regional organizations like the Shanghai Cooperation Organization," Sumit Ganguly, an India expert and professor of Political Science at the Indiana University Bloomington, told DW.

The two most populous nations in the world, India and China are home to some 2.7 billion people, over a third of humanity. The two countries still have competing and unresolved territorial claims.

The disputes occasionally flare up and lead to minor border skirmishes. Two years ago, China and India were engaged in a tense, two-month border stand-off in the Doklam plateau claimed by both China and Bhutan.

"India is unhappy with China's stance on the Kashmir issue," Ganguly said. "However, New Delhi should have anticipated an adverse reaction. China realizes that if India succeeds in this endeavor, it will freeze the Kashmir issue thereby freeing up India to focus on the Sino-Indian border."

Over the past decade, New Delhi has looked warily at Beijing's strengthening economic, military and diplomatic muscle, which has let China expand its footprint and clout even in South Asia, a region India views as its strategic backyard.

China has been concerned by India's growing closeness with countries such as the US and Japan. New Delhi recently upgraded its participation in the Quad — a grouping with the US, Australia and Japan that Washington hopes will counter China.

India and China also have differences over trade, with both wanting greater access to each other's markets. During his meeting with Xi, Modi is expected to raise economic issues, including India's $53 billion (€48 billion) trade deficit with China in 2018-19 and the smaller presence of Indian firms in China compared with that of other major economies.

From India to Nepal

After India, Xi will travel to Nepal on Saturday and Sunday for a state visit, the first by a Chinese president in more than two decades. In recent years, India has been worried about the strengthening of ties between Nepal and China.

Beijing has pledged support for a slew of infrastructure and development projects in the country, which have helped increase China's clout in Kathmandu.

Local media have reported that Xi and Nepal's PM KP Sharma Oli will oversee the signing of several agreements on infrastructure projects including a trans-Himalayan railway to connect the two countries.