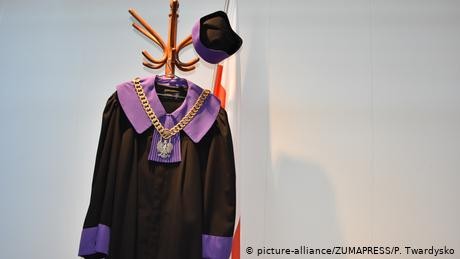 The European Commission filed a case on Thursday against Poland over a controversial new disciplinary regime that fails to protect court judges from political influence.

The Commission said the legislation violates the principles of judicial independence and brought the issue to the European Court of Justice.

"Judges are not insulated from political control and thus judicial independence is violated," the EU executive said in a statement. The executive also argued that the legislation means that current law means "there is no reasonable time frame" in which cases are processed.

The Commission also tweeted that they "engage in ongoing dialogue with members states who do not respect EU law."

Read more: Opinion: 80 years after World War II, we must fight for an open Europe

The judicial reforms were introduced by Poland's ruling conservative Law and Justice Party (PiS). The laws will now be subject to investigation and potential sanctions.

The news comes ahead of nationwide elections in Poland this Sunday. The PiS are widely expected to win a second term in office.

The party has faced criticism for weakening democracy by putting media, the courts and other non-governmental groups into more direct state control.

However, they have remained popular within Poland for their rhetoric of national pride combating perceived threats from the EU, migrants and gay people.