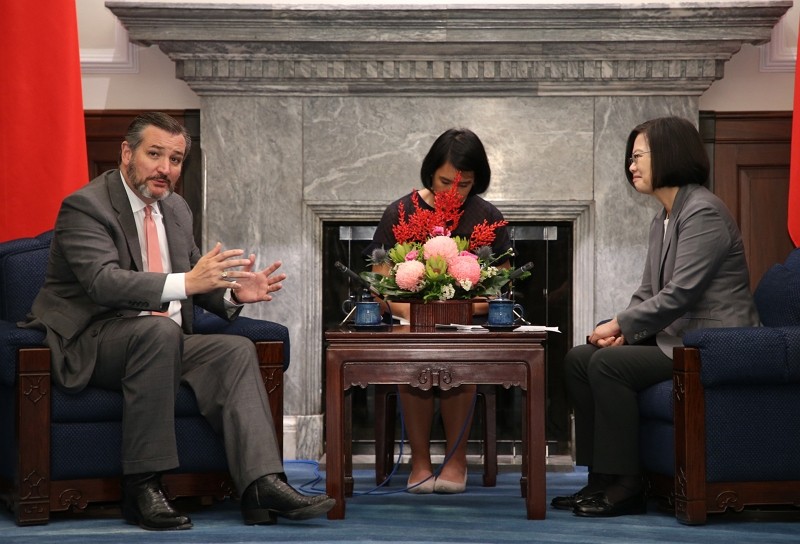 TAIPEI (Taiwan News) — During a reception for U.S. Senator Ted Cruz (R-TX), Cruz and Tsai Ing-wen exchanged their views on the state of the U.S.-Taiwan relationship, with Tsai recalling that the legislator had issued a press release praising Taiwan as an “Exemplar of Liberty and Best Hope for Peace in East Asia” when she was elected president in 2016.

President Tsai acknowledged Cruz’s support for Taiwan in the Senate and expressed the deep appreciation of the Taiwanese people. She went on to say that Cruz’s support contributed to salient Taiwanese issues being incorporated in the National Defense Authorization Act for Fiscal Year 2020, including a reaffirmation of the Taiwan Relations Act and the Six Assurances, and noted the strengthened cooperation on defense and security matters.

In addition, Tsai expressed hope that Taiwan and the U.S. could sign bilateral trade agreements to enhance the development of the respective countries' industries. She added that U.S.-Taiwan ties have reached an unprecedented level of stability and that Taiwan anticipates collaborating with Cruz on a more profound and far-reaching partnership.

During the meeting, Cruz stated that Taiwan is not only important to Asia but also the whole world since it has demonstrated the feasibility of liberty and democracy, which is why China fears the island's success. He asserted that defending freedom and democracy is particularly significant in the midst of the suppression of Hong Kong.

The senator also called himself a proud friend of Taiwan and said he hopes Taiwanese know the American people are also proud to be Taiwan’s friend, reports CNA.