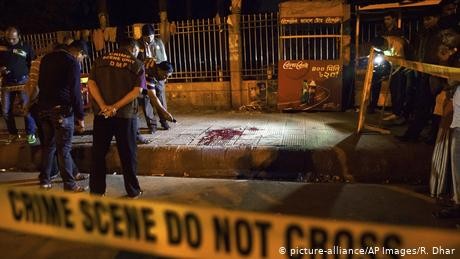 A Bangladeshi diaspora group, European Bangladesh Forum (EBF), last week organized an international conference in Brussels to discuss the security challenges and threats faced by South Asian nations on account of violent extremism, and the role governments and civil society can play to counter them.

Members attending the meeting stressed the need for more concerted efforts to tackle terrorism-related threats in the world. In a globalized world, they said, terror threats were not limited to South Asia; other regions like Europe and North America were also equally affected.

Immigration has been a hot topic in Europe over the past several years. In 2015, Germany allowed nearly 900,000 refugees and asylum-seekers to enter the country under Chancellor Angela Merkel's open-door policy. Many of them were fleeing war and extreme poverty in the Middle East, Asia and Africa.

The number of asylum-seekers entering Europe has drastically dropped since then. Still, euroskeptic and right-wing groups have seized on the crisis, claiming it undermines the social fabric of the continent and managing to improve their electoral prospects.

The 28-nation EU has not yet found compromise or reached an agreement on a system of distribution for rescued asylum-seekers.

Addressing the issue of immigration, Brando Benifei, a member of the European Parliament, underlined the integration problems faced even by second- and third-generation immigrant families in Europe.

He explained how some of these families in Italy were unable to integrate into mainstream society and how extremist groups attracted them toward terrorism. "Under these circumstances, initiatives have to be adopted to stand beside the young people to increase their sense of respectful belonging," he said.

Niels van den Berge, a Dutch politician, said during the meeting that vulnerable groups needed to be brought into the mainstream so that they could discuss their issues openly with other members of society. "It will not bring any solution, if the vulnerable and threatening groups are kept and left behind in seclusion," he said, adding that efforts have to be made to bring them back into the mainstream.

Immigrants are also more prone to discrimination in the labor and housing markets as well as in official dealings.

Debarati Guha, the head of DW's Asia Service, also participated in the event. Addressing the gathering, she mentioned the rise of Hindu fundamentalism in India.

The country's ruling Bharatiya Janata Party (BJP) promotes Hindu nationalism and in the past few years, India has witnessed several instances of right-wing lynchings where Muslims were targeted for eating beef or failing to recite Hindu slogans when instructed.

And the BJP's victory in this year's general election was largely seen as a referendum on Modi's Hindu nationalist politics.

And any form of dissent and disagreement with Modi's government or with the idea of Hindu nationalism has often been attacked as being "anti-national."

In Brussels, Guha said it was of no use trying to tag any particular religion — for example, Islam — as "extremist," as this would only encourage conflict. The way to bring about peace in society was through mutual care and respect, regardless of people's social class or religion, she added.

Other speakers also urged mutual understanding, respect, better integration into mainstream society and efforts to foster a sense of belonging, to prevent the youth from veering toward extremist groups and ideologies.