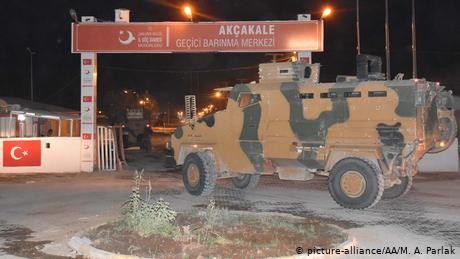 The Kurdish militia-led Syrian Democratic Forces (SDF) on Wednesday declared a three-day state alert in preparation for the Turkish incursion.

"As threats and mobilization of the Turkish Army and its mercenaries escalate ... we call on our people ... to go to the area bordering Turkey to carry out their moral duty and show resistance at these sensitive historical moments," an SDF statement said.

According to a local broadcast citing Turkish Defense Minister Hulusi Akar on Wednesday, the Turkish army's preparations are well underway.

An aide to Turkish President Tayyip Erdogan said the Turkish army and its Syrian rebel allies would cross the Syrian border "shortly." The Turkish government has said the Syrian Kurds are linked to the outlawed Kurdistan Workers Party (PKK), which Ankara, the European Union and the United States regard as a terrorist organization.

According to state media, more than 100 vehicles carrying troops, weapons and construction equipment were sent to Sanliurfa's Akcakale district, 6 kilometers from the strategic border town of Tal Abyad. The Syrian Observatory for Human Rights, a British-based monitoring group, reported Wednesday that people of Tal Abyad were fleeing as it's expected it would be under attack first.

US troops on Monday started pulling back from areas in northeastern Syria, paving the way for a Turkish incursion. The SDF had been a central partner in the US effort to defeat the "Islamic State" in Syria. Trump abruptly announced on Sunday that American troops would step aside for Turkey's push. He then tweeted that "if Turkey does anything that I, in my great and unmatched wisdom, consider to be off limits, I will totally destroy and obliterate economy of Turkey," adding that Europe must "watch over."