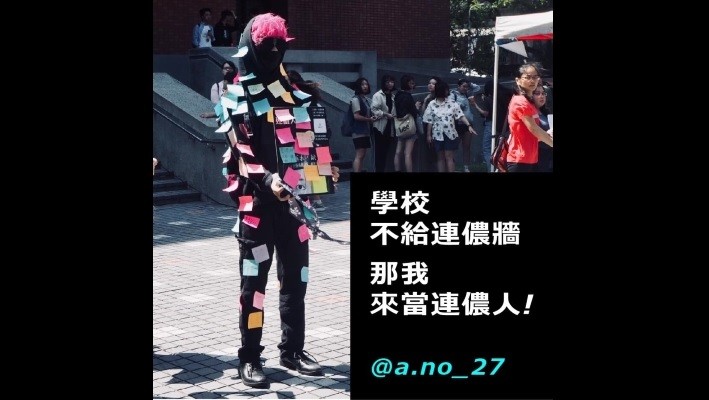 TAIPEI (Taiwan News) — In an innovative response to the constant assault on Lennon Walls by Chinese students and tourists, a group of Taiwanese college students has decided to turn themselves into "Human Lennon Walls."

After Ming Chuan University officials refused students' request to create a Lennon Wall on campus to support the Hong Kong protesters on the grounds that it would "obstruct enrollment," some students launched a pair of "Human Lennon Wall" events. At the events, which are taking place on the school's Taipei and Taoyuan campuses, students dress in black and stand next to a box of Post-it notes that passersby can fill out and stick on their bodies.

When photos of the students covered in sticky notes surfaced online, netizens praised the activity as being creative and brave. The school responded that the activity was a kind of installation art, which is a form of free expression, and that it would not interfere. Business students at Ming Chuan volunteered to launch the "Human Lennon Wall" campaign, according to a Facebook group supporting President Tsai Ing-wen's (蔡英文) bid for re-election. In one photo posted on the page, a student dressed in black can be seen covered in sticky notes, and a caption on the image reads, "The school won't let us build a Lennon Wall, so I'll be a Human Lennon Wall."

The "Human Lennon Walls" first appeared on Tuesday (Oct. 8) and are expected to remain at Ming Chuan University campuses through Wednesday (Oct. 9). In a statement released on Wednesday, the university denied that it had abandoned the interests of 15,000 Taiwanese students for the sake of a few hundred foreign students and said that it had posted an "electric Lennon Wall" on its website for use by both teachers and students.