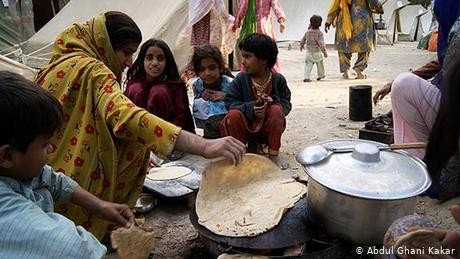 Shahida Soomro is a middle-aged woman in the town of Bhit Shah in the southern Sindh province. She's one of the more than 22,000 Lady Health Workers (LHW) in the province, serving a vital link between the community and the public health system.

On a warm afternoon, inside the courtyard of a two bedroom house, Soomro is surrounded by women of all ages discussing sexual and reproductive health.

Some young mothers, carrying infants and toddlers, look shy and uncomfortable. They are accompanied by their mothers-in-law or elderly aunts to do the talking. Everyone wants to learn how to avoid unplanned, frequent pregnancies.

Shahida takes out some boxes and illustrations to explain how contraceptives work. She shows them injections, pills and condoms, which are all available free of charge at the local government hospital. But getting everyone to accept her advice is not so straightforward.

"There are a lot of myths and misconceptions," she says. "Some women are afraid that it will make them infertile forever. Others think it is against their religion."

Shahida is not a trained nurse or a doctor. She says her job is to listen and reassure the women that they can take charge of their lives. "I am from the community. So they know me and trust me when I refer them to the hospital."

No trust in sex education

Sex education is taboo in Pakistan's conservative Muslim society. Fear of a backlash from Islamic clerics has prevented public awareness on family planning and reproductive health.

Access to contraceptives remains limited. Women who don't want multiple pregnancies are usually not allowed to make those choices. Experts say that family planning has failed to become a national priority.

In the last two decades, Pakistan's population has more than doubled, from about 130 million in 1998 to 208 million in 2017. According to the United Nations Population Fund, Pakistan ranks among the world's six most populous countries, along with China, India, the United States, Indonesia and Brazil.

At the current annual rate of 2.4%, the UN says Pakistan's population could reach 403 million by 2050. For a nuclear-armed country with a growing young demographic, shrinking economy and a history of military interventions, experts warn a disaster is waiting to happen. In response to the problem, members of Pakistan's civil society are taking action.

Established in the 1990s, Pakistan's Lady Health Worker program has provided a critical link to cover a wide range of maternal and child health services. It has been effective in running door-to-door campaigns and distributing contraceptives.

But the government-run program has suffered from a lack of training and funding. Community volunteers like Shahida are often not paid for months. Health workers are sometimes forced to resort to street protests to try and get the government's attention.

"It's not just about lack of funds, but a lack of political commitment to family planning," says Nadeem Shah, senior medical officer at a provincial government hospital.

In his experience, Pakistan's public health system "suffers from a lack of sustained, integrated approach." Shah says the system misappropriates public funds. "It's reflected in the overall failure of governance," he says.

But the apparent institutional decay has also led to unexpected developments. In Shah's small village in Pakistan's southeast, Bhanot, it has mobilized the community to look after its own welfare.

Under a not-for-profit Peoples Public Health Initiative (PPHI), community leaders meet twice a month to discuss access to family planning methods — both for women and men.

"The attitudes are changing, thanks to mobile phones and the internet," says Mohammed Musa Sial, a social activist. "There's a growing realization among men that family planning is a good idea and it is in their own interest. We can't wait for the government to come to our help. We have to help ourselves."

But if Pakistan is to defuse its ticking population bomb, community-led activism can only go so far. For change at a national scale, the government will have to take the lead, say observers.

The government of Prime Minister Imran Khan says it is committed to tackling the problem by allocating more funds. His government has talked about building a welfare state under the "Ehsaas" program, meaning empathy. It builds on social safety programs devised by previous governments by incorporating new initiatives on poverty alleviation, health and education.

Although the plan looks good on paper, critics say his government is too distracted by other issues — including a struggling economy, rampant corruption and the volatile situation in Afghanistan and Kashmir — to institute any meaningful reform.

However, experts say ensuring universal access to contraceptives is one thing that could potentially be a game changer for Pakistan's population problem.

A report released in September has found that about half of the 16.8 million married women in Pakistan do not use modern contraceptive methods.

The report, jointly produced by the US-based Guttmacher Institute and the Population Council in Pakistan, further points out that there are "an estimated 3.8 million unintended pregnancies each year, most of which result from unmet need for modern contraception."

"This study provides robust evidence that makes a case for investment in additional financing for family planning services in Pakistan," says Zeba Sathar, country director of the Population Council in Pakistan and co-author of the report.

Her research shows that Pakistan currently spends $81 million (€73.7 million) annually on contraceptives. But if the country were to double its spending to an estimated $173 million per year on modern contraception, it could prevent an estimated 3.1 million unintended pregnancies annually. That would translate into a decline of 82%.

Sathar has long argued that Pakistan can learn much from countries like Indonesia and Malaysia, as well as from those closer to home like Iran and Bangladesh. Through sustained efforts, these countries have brought their fertility levels under control. In Bangladesh, female literacy and family planning programs at the grass-roots level helped turn the tide.

Pakistan could also make strides on this front by eradicating child marriages, improving girls' education and empowering its women, say observers. Its leaders, they underline, just need to move beyond rhetoric to make family planning a national priority.