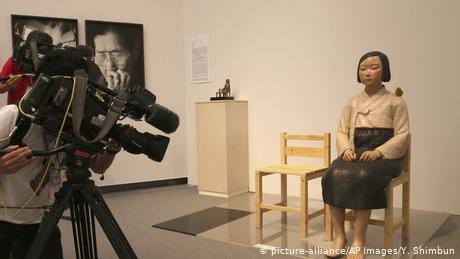 The organizers of the Aichi Treinnale 2019 show said they reopened the exhibit after putting new safety measures in place.

The exhibition was dedicated to showing censored works and was originally planned to run for over two months. But the inclusion of a South Korean "comfort woman" statue sparked a controversy just three days after it opened.

The Japanese government pulled subsidies for the exhibition, claiming Aichi prefecture failed to provide full information about the show in advance.

It is estimated that around 200,000 women and girls, mainly Koreans and sometimes referred to as "comfort women," were forced into sexual slavery by the Japanese military during World War II. Historians say the Japanese imperial army operated brothels across the Japanese-occupied territories during the war.

The chapter of history has marred relations between Japan and South Korea. For a long time following the end of the war, discussing the issue of "comfort women" remained a taboo in Japan. Only in the early 1990s did the issue rise to prominence, and since 1992 the survivors have been demonstrating outside the Japanese embassy in Seoul demanding an official apology and financial compensation from Japan.

"It is very regrettable that displays of some artists' works are cancelled. I want to complete this Aichi Triennale, one of the biggest art festivals in Japan, in an amicable way," Aichi Governor Hideaki Omura said Monday.

In August, Omura said the organizers received a number of threatening emails, phone calls and faxes to cancel the exhibition.

In recent years, activists have put up dozens of statues in public venues around the world, many of them in South Korea, to honor "comfort women."

The statues have drawn the ire of Tokyo, which has pressed South Korea to remove one such statue outside its Seoul embassy.

Japan disputes that the women were systematically rounded up or abducted by representatives of the military, while there are many conservatives there who say they were merely well-paid prostitutes.